We employed Illumina 450 K Infinium microarrays to profile DNA methylation (DNAm) in neuronal nuclei separated by fluorescence-activated sorting from the postmortem orbitofrontal cortex (OFC) of heroin users who died from heroin overdose (N = 37), suicide completers (N = 22) with no evidence of heroin use and from control subjects who did not abuse illicit drugs and died of non-suicide causes (N = 28). We identified 1298 differentially methylated CpG sites (DMSs) between heroin users and controls, and 454 DMSs between suicide completers and controls (p < 0.001). DMSs and corresponding genes (DMGs) in heroin users showed significant differences in the preferential context of hyper and hypo DM. HyperDMSs were enriched in gene bodies and exons but depleted in promoters, whereas hypoDMSs were enriched in promoters and enhancers. In addition, hyperDMGs showed preference for genes expressed specifically by glutamatergic as opposed to GABAergic neurons and enrichment for axonogenesis- and synaptic-related gene ontology categories, whereas hypoDMGs were enriched for transcription factor activity- and gene expression regulation-related terms. Finally, we found that the DNAm-based “epigenetic age” of neurons from heroin users was younger than that in controls. Suicide-related results were more difficult to interpret. Collectively, these findings suggest that the observed DNAm differences could represent functionally significant marks of heroin-associated plasticity in the OFC. View Full-Text
Keywords: DNA methylation; drug addiction; heroin; suicide; brain; neurons; human DNA methylation; drug addiction; heroin; suicide; brain; neurons; human
►▼ Show Figures 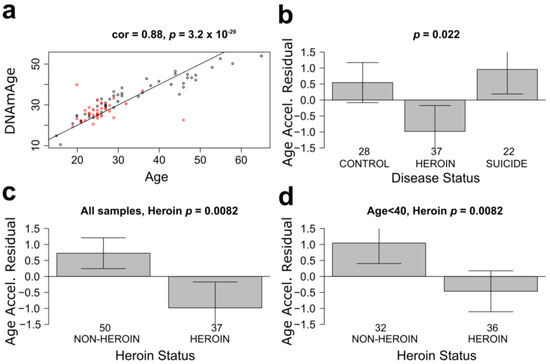