Reticulate Evolution of the Rock Lizards: Meiotic Chromosome Dynamics and Spermatogenesis in Diploid and Triploid Males of the Genus Darevskia

Knowing whether triploid hybrids resulting from natural hybridization of parthenogenetic and bisexual species are fertile is crucial for understanding the mechanisms of reticulate evolution in rock lizards. Here, using males of the bisexual diploid rock lizard species Darevskia raddei nairensis and Darevskia valentini and a triploid hybrid male Darevskia unisexualis × Darevskia valentini, we performed karyotyping and comparative immunocytochemistry of chromosome synapsis and investigated the distribution of RAD51 and MLH1 foci in spread spermatocyte nuclei in meiotic prophase I. Three chromosome sets were found to occur in cell nuclei in the D. unisexualis × D. valentini hybrid, two originating from a parthenogenetic D. unisexualis female and one from the D. valentini male. Despite this distorted chromosome synapsis and incomplete double-strand breaks repair in meiotic prophase I, the number of mismatch repair foci in the triploid hybrid was enough to pass through both meiotic divisions. The defects in synapsis and repair did not arrest meiosis or spermatogenesis. Numerous abnormal mature spermatids were observed in the testes of the studied hybrid. View Full-Text
Keywords: rock lizards; triploid; meiosis; synaptonemal complex; presynaptic alignment; hybridogenesis; DSB repair rock lizards; triploid; meiosis; synaptonemal complex; presynaptic alignment; hybridogenesis; DSB repair
►▼ Show Figures 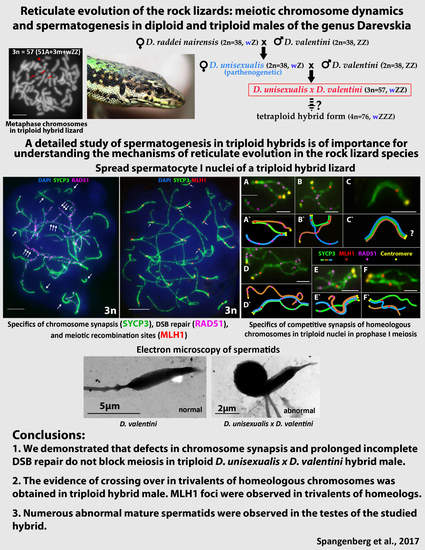