The Plasticizer Bisphenol A Perturbs the Hepatic Epigenome: A Systems Level Analysis of the miRNome
Next Article in Special Issue

Hepatocellular carcinoma (HCC) is a complex disease with a multi-step carcinogenic process from preneoplastic lesions, including cirrhosis, low-grade dysplastic nodules (LGDNs), and high-grade dysplastic nodules (HGDNs) to HCC. There is only an elemental understanding of its molecular pathogenesis, for which a key problem is to identify when and how the critical transition happens during the HCC initiation period at a molecular level. In this work, for the first time, we revealed that LGDNs is the tipping point (i.e., pre-HCC state rather than HCC state) of hepatocarcinogenesis based on a series of gene expression profiles by a new mathematical model termed dynamic network biomarkers (DNB)—a group of dominant genes or molecules for the transition. Different from the conventional biomarkers based on the differential expressions of the observed genes (or molecules) for diagnosing a disease state, the DNB model exploits collective fluctuations and correlations of the observed genes, thereby predicting the imminent disease state or diagnosing the critical state. Our results show that DNB composed of 59 genes signals the tipping point of HCC (i.e., LGDNs). On the other hand, there are a large number of differentially expressed genes between cirrhosis and HGDNs, which highlighted the stark differences or drastic changes before and after the tipping point or LGDNs, implying the 59 DNB members serving as the early-warning signals of the upcoming drastic deterioration for HCC. We further identified the biological pathways responsible for this transition, such as the type I interferon signaling pathway, Janus kinase–signal transducers and activators of transcription (JAK–STAT) signaling pathway, transforming growth factor (TGF)-β signaling pathway, retinoic acid-inducible gene I (RIG-I)-like receptor signaling pathway, cell adhesion molecules, and cell cycle. In particular, pathways related to immune system reactions and cell adhesion were downregulated, and pathways related to cell growth and death were upregulated. Furthermore, DNB was validated as an effective predictor of prognosis for HCV-induced HCC patients by survival analysis on independent data, suggesting a potential clinical application of DNB. This work provides biological insights into the dynamic regulations of the critical transitions during multistep hepatocarcinogenesis. View Full-Text
Keywords: dynamic network biomarkers; hepatocellular carcinoma; low-grade dysplastic nodules; tipping point dynamic network biomarkers; hepatocellular carcinoma; low-grade dysplastic nodules; tipping point
►▼ Show Figures 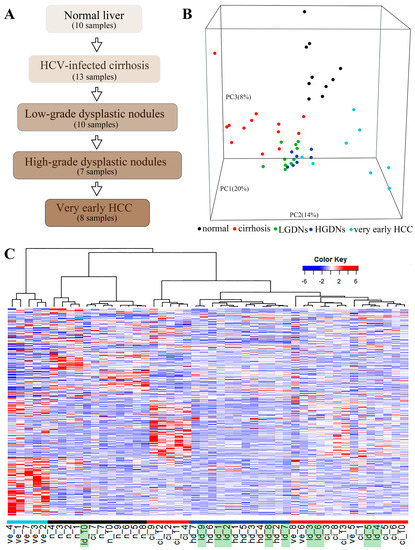