The Replication Fork: Understanding the Eukaryotic Replication Machinery and the Challenges to Genome Duplication
Next Article in Special Issue

Use of RNA Interference by In Utero Electroporation to Study Cortical Development: The Example of the Doublecortin Superfamily

The Sound of Silence: RNAi in Poly (ADP-Ribose) Research

Poly(ADP-ribosyl)-ation is a nonprotein posttranslational modification of proteins and plays an integral part in cell physiology and pathology. The metabolism of poly(ADP-ribose) (PAR) is regulated by its synthesis by poly(ADP-ribose) polymerases (PARPs) and on the catabolic side by poly(ADP-ribose) glycohydrolase (PARG). PARPs convert NAD+ molecules into PAR chains that interact covalently or noncovalently with target proteins and thereby modify their structure and functions. PAR synthesis is activated when PARP1 and PARP2 bind to DNA breaks and these two enzymes account for almost all PAR formation after genotoxic stress. PARG cleaves PAR molecules into free PAR and finally ADP-ribose (ADPR) moieties, both acting as messengers in cellular stress signaling. In this review, we discuss the potential of RNAi to manipulate the levels of PARPs and PARG, and consequently those of PAR and ADPR, and compare the results with those obtained after genetic or chemical disruption. View Full-Text
Keywords: ADPR; PAR; PARP1; PARP2; PARG; siRNA ADPR; PAR; PARP1; PARP2; PARG; siRNA
►▼ Show Figures 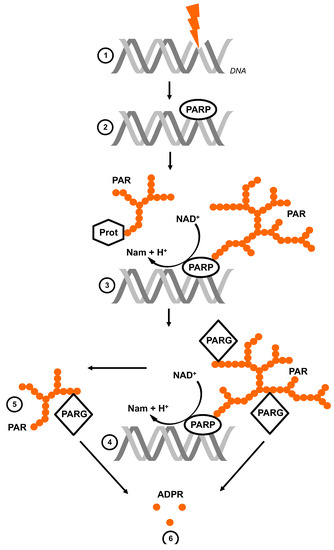