X and Y chromosomes in mammals are different in size and gene content due to an evolutionary process of differentiation and degeneration of the Y chromosome. Nevertheless, these chromosomes usually share a small region of homology, the pseudoautosomal region (PAR), which allows them to perform a partial synapsis and undergo reciprocal recombination during meiosis, which ensures their segregation. However, in some mammalian species the PAR has been lost, which challenges the pairing and segregation of sex chromosomes in meiosis. The African pygmy mouse Mus mattheyi shows completely differentiated sex chromosomes, representing an uncommon evolutionary situation among mouse species. We have performed a detailed analysis of the location of proteins involved in synaptonemal complex assembly (SYCP3), recombination (RPA, RAD51 and MLH1) and sex chromosome inactivation (γH2AX) in this species. We found that neither synapsis nor chiasmata are found between sex chromosomes and their pairing is notably delayed compared to autosomes. Interestingly, the Y chromosome only incorporates RPA and RAD51 in a reduced fraction of spermatocytes, indicating a particular DNA repair dynamic on this chromosome. The analysis of segregation revealed that sex chromosomes are associated until metaphase-I just by a chromatin contact. Unexpectedly, both sex chromosomes remain labelled with γH2AX during first meiotic division. This chromatin contact is probably enough to maintain sex chromosome association up to anaphase-I and, therefore, could be relevant to ensure their reductional segregation. The results presented suggest that the regulation of both DNA repair and epigenetic modifications in the sex chromosomes can have a great impact on the divergence of sex chromosomes and their proper transmission, widening our understanding on the relationship between meiosis and the evolution of sex chromosomes in mammals. View Full-Text
Keywords: sex chromosomes; meiosis; evolution; pygmy mouse; Mus mattheyi sex chromosomes; meiosis; evolution; pygmy mouse; Mus mattheyi
►▼ Show Figures 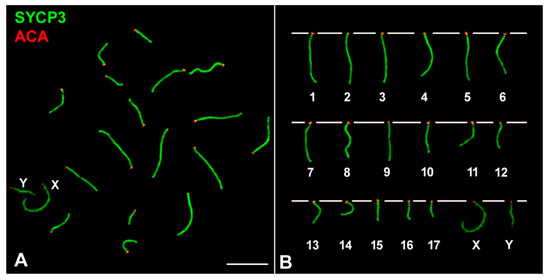