The Diagnostic Journey of a Patient with Prader–Willi-Like Syndrome and a Unique Homozygous SNURF-SNRPN Variant; Bio-Molecular Analysis and Review of the Literature
Previous Article in Special Issue

Shugoshin2 (SGO2) may participate in the occurrence and development of tumors by regulating abnormal cell cycle division, but its prognostic value in hepatocellular carcinoma (HCC) remains unclear. In this study, we accessed The Cancer Genome Atlas (TCGA) database to get the clinical data and gene expression profile of HCC. The expression of SGO2 in HCC tissues and nontumor tissues and the relationship between SGO2 expression, survival, and clinicopathological parameters were analyzed. The SGO2 expression level was significantly higher in HCC tissues than in nontumor tissues (p < 0.001). An analysis from the Oncomine and Gene Expression Profiling Interactive Analysis 2 (GEPIA2) databases also demonstrated that SGO2 was upregulated in HCC (all p < 0.001). A logistic regression analysis revealed that the high expression of SGO2 was significantly correlated with gender, tumor grade, pathological stage, T classification, and Eastern Cancer Oncology Group (ECOG) score (all p < 0.05). The overall survival (OS) of HCC patients with higher SGO2 expression was significantly poor (p < 0.001). A multivariate analysis showed that age and high expression of SGO2 were independent predictors of poor overall survival (all p < 0.05). Twelve signaling pathways were significantly enriched in samples with the high-SGO2 expression phenotype. Ten proteins and 34 genes were significantly correlated with SGO2. In conclusion, the expression of SGO2 is closely related to the survival of HCC. It may be used as a potential therapeutic target and prognostic marker of HCC. View Full-Text
Keywords: SGO2; hepatocellular carcinoma; outcome; survival; therapeutic target; bioinformatics SGO2; hepatocellular carcinoma; outcome; survival; therapeutic target; bioinformatics
►▼ Show Figures 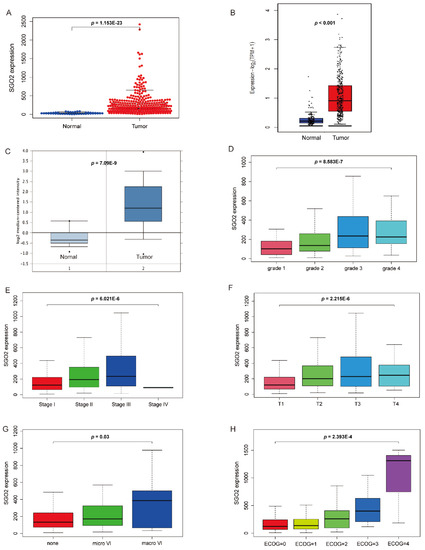