Chromosomal Polymorphism and Speciation: The Case of the Genus Mazama (Cetartiodactyla; Cervidae)

Chromosomal polymorphism plays a major role in speciation processes in mammals with high rates of karyotypic evolution, as observed in the family Cervidae. One remarkable example is the genus Mazama that comprises wide inter- and intra-specific chromosomal variability. To evaluate the impact of chromosomal polymorphisms as reproductive barriers within the genus Mazama, inter-specific hybrids between Mazama gouazoubira and Mazama nemorivaga (MGO × MNE) and intra-specific hybrids between cytotypes of Mazama americana (MAM) differing by a tandem (TF) or centric fusion (Robertsonian translocations—RT) were evaluated. MGO × MNE hybrid fertility was evaluated by the seminal quality and testicular histology. MAM hybrids estimation of the meiotic segregation products was performed by sperm-FISH analysis. MGO × MNE hybrids analyses showed different degrees of fertility reduction, from severe subfertility to complete sterility. Regarding MAM, RT, and TF carriers showed a mean value for alternate segregation rate of 97.74%, and 67.23%, and adjacent segregation rate of 1.80%, and 29.07%, respectively. Our results suggested an efficient post-zygotic barrier represented by severe fertility reduction for MGO × MNE and MAM with heterozygous TF. Nevertheless, RT did not show a severe effect on the reproductive fitness in MAM. Our data support the validity of MGO and MNE as different species and reveals cryptic species within MAM. View Full-Text
Keywords: cytogenetics; hybrids; post-zygotic barrier; sperm-FISH; Neotropical deer cytogenetics; hybrids; post-zygotic barrier; sperm-FISH; Neotropical deer
►▼ Show Figures 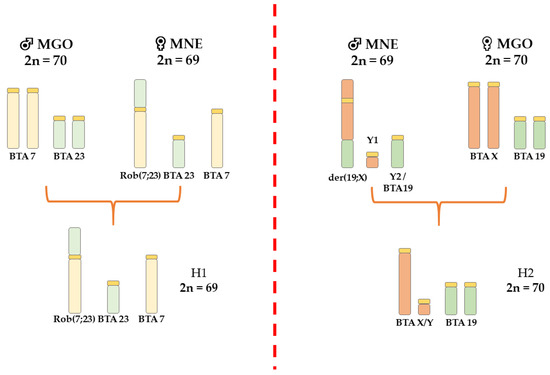