PMM2-CDG is a rare disease, causing hypoglycosylation of multiple proteins, hence preventing full functionality. So far, no direct genotype–phenotype correlations have been identified. We carried out a retrospective cohort study on 26 PMM2-CDG patients. We collected the identified genotype, as well as continuous variables indicating the disease severity (based on Nijmegen Pediatric CDG Rating Score or NPCRS) and dichotomous variables reflecting the patients’ phenotype. The phenotypic effects of patients’ genotype were studied using non-parametric and Chi-Square tests. Seventeen different pathogenic variants have been studied. Variants with zero enzyme activity had no significant impact on the Nijmegen score. Pathogenic variants involving the stabilization/folding domain have a significantly lower total NPCRS (p = 0.017): presence of the p.Cys241Ser mutation had a significantly lower subscore 1,3 and NPCRS (p = 0.04) and thus result in a less severe phenotype. On the other hand, variants involving the dimerization domain, p.Pro113Leu and p.Phe119Leu, resulted in a significantly higher NPCRS score (p = 0.002), which indicates a worse clinical course. These concepts give a better insight in the phenotypic prognosis of PMM2-CDG, according to their molecular base. View Full-Text
Keywords: PMM2-CDG; NPCRS; congenital disorders of glycosylation; genotype; mutation PMM2-CDG; NPCRS; congenital disorders of glycosylation; genotype; mutation
►▼ Show Figures 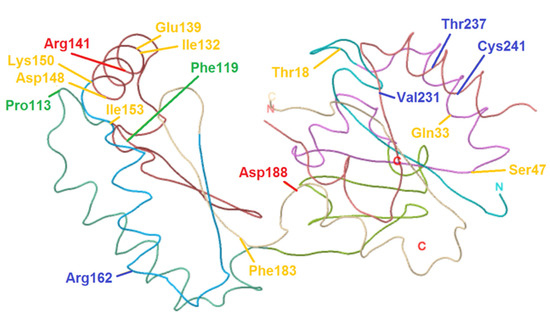