The LDLR, APOB, and PCSK9 Variants of Index Patients with Familial Hypercholesterolemia in Russia

MicroRNAs (miRNAs) are key regulators of gene expression, potentially affecting several biological processes, whose function can be altered by sequence variation. Hence, the integration of single nucleotide polymorphisms (SNP) and miRNAs can explain individual differences in economic traits. To provide new insights into the effects of SNPs on miRNAs and their related target genes, we carried out a multi-omic analysis to identify SNPs in miRNA mature sequences (miR-SNPs) associated with fatty acid (FA) composition in the Nelore cattle. As a result, we identified 3 miR-SNPs in different miRNAs (bta-miR-2419-3p, bta-miR-193a-2, and bta-miR-1291) significantly associated with FA traits (p-value < 0.02, Bonferroni corrected). Among these, the rs110817643C>T, located in the seed sequence of the bta-miR-1291, was associated with different ω6 FAs, polyunsaturated FA, and polyunsaturated:saturated FA ratios. Concerning the other two miR-SNPs, the rs43400521T>C (located in the bta-miR-2419-3p) was associated with C12:0 and C18:1 cis-11 FA, whereas the rs516857374A>G (located in the bta-miR-193a-2) was associated with C18:3 ω6 and ratio of ω6/ω3 traits. Additionally, to identify potential biomarkers for FA composition, we described target genes affected by these miR-SNPs at the mRNA or protein level. Our multi-omics analysis outlines the effects of genetic polymorphism on miRNA, and it highlights miR-SNPs and target candidate genes that control beef fatty acid composition. View Full-Text
Keywords: polymorphism; association analysis; miRNAs; Bos indicus; beef quality polymorphism; association analysis; miRNAs; Bos indicus; beef quality
►▼ Show Figures 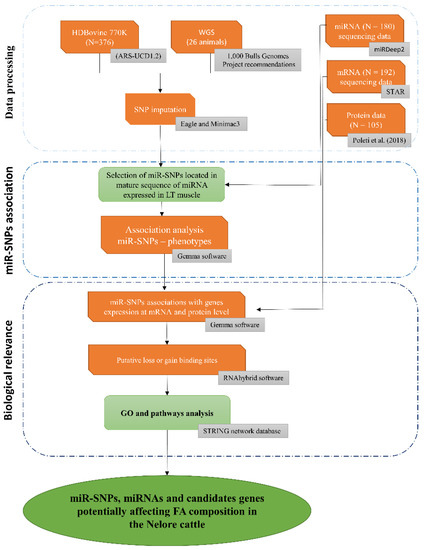