Genome stability is an integral feature of all living organisms. Aneuploidy is the most common cause of fetal death in humans. The timing of bursts in increased aneuploidy frequency coincides with the waves of global epigenetic reprogramming in mammals. During gametogenesis and early embryogenesis, parental genomes undergo two waves of DNA methylation reprogramming. Failure of these processes can critically affect genome stability, including chromosome segregation during cell division. Abnormal methylation due to errors in the reprogramming process can potentially lead to aneuploidy. On the other hand, the presence of an entire additional chromosome, or chromosome loss, can affect the global genome methylation level. The associations of these two phenomena are well studied in the context of carcinogenesis, but here, we consider the relationship of DNA methylation and aneuploidy in early human and mammalian ontogenesis. In this review, we link these two phenomena and highlight the critical ontogenesis periods and genome regions that play a significant role in human reproduction and in the formation of pathological phenotypes in newborns with chromosomal aneuploidy. View Full-Text
Keywords: aneuploidy; DNA methylation; human embryogenesis; epigenetic reprogramming aneuploidy; DNA methylation; human embryogenesis; epigenetic reprogramming
►▼ Show Figures 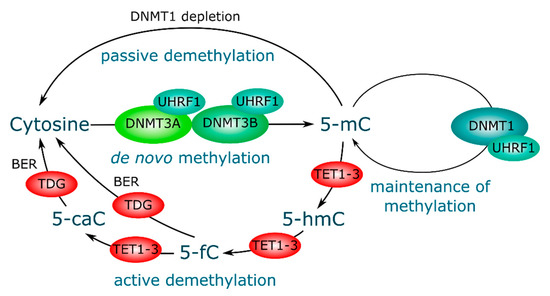