Fusarium head blight (FHB), caused primarily by the fungus Fusarium graminearum, is one of the most damaging diseases of wheat, causing significant loss of yield and quality worldwide. Warm and wet conditions during flowering, a lack of resistant wheat varieties, and high inoculum pressure from corn stubble contribute to frequent FHB epidemics in the southern United States. The soft red winter wheat variety AGS 2060 is moderately susceptible (as opposed to susceptible) to FHB and regularly found in pedigrees of resistant breeding lines. AGS 2060 does not carry any known resistance genes or quantitative trait loci (QTL). A QTL mapping study was conducted to determine the location and genetic effect of its resistance using a doubled haploid mapping population produced from a cross between wheat varieties AGS 2060 and AGS 2035 (FHB susceptible). The population was genotyped using the Illumina iSelect single nucleotide polymorphism (SNP) array for wheat and phenotyped in Baton Rouge and Winnsboro, Louisiana and Newport, Arkansas in 2018 and 2019. The effect of genotype was significant for Fusarium damaged kernels (FDK) and deoxynivalenol (DON) content across all locations and years, indicating genetic variation in the population. The study detected 13 QTLs (one each on chromosome 1A, 1B, 1D, 2A, 2B, 6A, 6B, 7A, and 7B, and two each on 5A and 5B) responsible for the reduction of FDK and/or DON. Of these, nine QTLs for FHB resistance were identified in Winnsboro, Louisiana, in 2019. QTLs on chromosomes 2A and 7A could be valuable sources of resistance to both DON and FDK over several environments and were likely the best candidates for use in marker-assisted selection. Consistently expressed QTLs on chromosomes 5A, 6B, and 7A were potentially newly identified sources of resistance to FHB in soft red winter wheat. View Full-Text
Keywords: Fusarium head blight; QTL; markers; resistance; wheat Fusarium head blight; QTL; markers; resistance; wheat
►▼ Show Figures 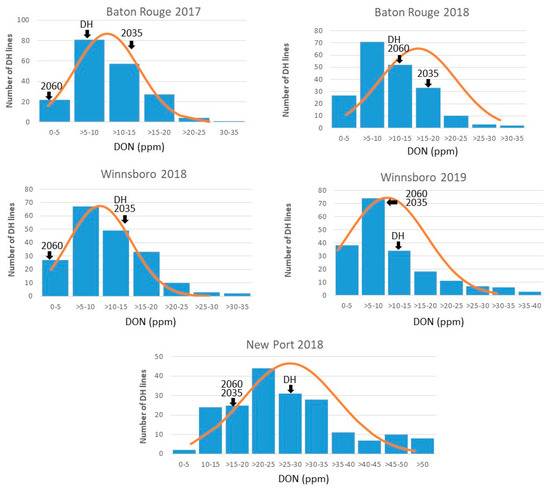