Congenital disorder of glycosylation (CDG) represents a multisystemic group of mild to severe neuro(metabolic) disorders, inherited in an autosomal recessive manner [1]. Forty-six relevant genes being so far identified [2]. Since the first case reported by the paediatrician Jaak Jaeken [3], remarkable discoveries have been made during these three and a half decades regarding CDG’s underlying mechanism [4].
Mechanically speaking, CDG is defined by a series of defects occurring in the synthesis of the glycan moiety of the glycoconjugates and the coupling of these polysaccharides to proteins and lipids [5]. The latest studies have revealed that CDGs are divided into O-linked disorders, as a result of an attachment of the O-glycans to the hydroxyl group of threonine or the serine of proteins, a process that takes place within only one cellular compartment. It is tissue-specific and possesses a distinct clinical panel, less severe than that of the N-linked group [6].
However, it took fifteen years to unveil the gene responsible for PMM2-CDG [7] (OMIN # 212065), and it has been established that PMM2, which is located on chromosome 16 [8], is the result of an attachment of N-glycans to an amino group of asparagine of proteins. Compared with O-linked, which takes place only in the Golgi apparatus, the N-linked occurs within the cytosol, endoplasmic reticulum, and Golgi apparatus.
More precisely, PMM2 encodes phosphomannomtase (PMM) during the second step of the mannose pathway [9] by converting man-6-P into the Man-1-P necessary to produce guanosine diphosphate (GDP)-Man for the mannosylation of glycans [8].
Among all twenty-five pure N-linked disorders that have been highlighted [5], the PMM2 phenotype is the most frequently encountered [6], with almost 100 mutations known to date [10]. More than 800 cases have been reported worldwide [11], with a frequency rate of 1:12,000, and up to 1:20,000 births [12].
As previously mentioned, several cohort studies have already been conducted in different countries in which both related and unrelated individuals were used [13,14,15,16,17,18,19,20,21,22,23]. Given that most of the reports have focused on the paediatric population [24,25,26], the long-term course during adolescence, respectively, adulthood has also provided additional conclusive data [13,19,22,25,27,28,29,30].
Cumulatively, this study aims to report the case of a Romanian carrier couple for CDG-Ia who underwent an IVF cycle associated with PGT-M by highlighting the necessity for genetic counselling in the field of rare diseases in order to develop adequate services.

Here we report the case of a Romanian couple, both of them being carriers for the congenital disorder of glycosylation type Ia (CDG-Ia). The first foetus died two months after birth. Imperative for CDG-Ia, the second baby has died at six months, the necropsy exam revealing a hyperaccumulation of fluid in the cerebellum, as well as a slow blood flow in the kidneys, lungs, and liver, respectively, and an increased amount of blood in the cerebellum, brain, liver, and lung. Additionally, abnormalities, such as the persistence of the arterial canal and ventricular septal defect have been observed.
CDG-Ia is an inborn condition which usually affects every system of organs, its type and magnitude ranging between individuals, even within the same family [31]. Depending on the mutation, there have been identified distinct phenotypes, varying from physical dysmorphism and intellectual disability, to polycystic kidney syndrome and thrombosis [32].
Vega et al. [10] aimed to reveal the molecular pathogenesis using a prokaryotic expression system. Therefore, from a small group consisting of 22 Spanish PMM2 patients, and the analysis of fourteen nucleotide change, they discovered six loss-of-function proteins, seven having residual activities up to more than 50%, and one normal variant change.
In 9 out of 54 patients, Grünewald et al. [33] observed similar residual activities of proteins in fibroblasts up to 70%. An abnormal transferrin pattern and a high reduced PMM activity have defined this subgroup. However, a subset of six patients were characterised by reduced PMM activity, which proved to be the result of the mutation that occurred in C241S.
Based on study design and methodology, the results obtained by Citro et al. [34] are somehow in an antithetical phase with the previous two studies. They have demonstrated that PMM2 is very tolerable to mutations and that the CDG-related phenotype could be the result of mutations occurring in other associated genes(s). One potential inhibitor for missense mutations is CID2876053 (1-(3-chlorophenyl)-3,3-bis(pyridine-2-yl)urea). It has a strong binding affinity for D65Y mutant but also displayed a strong interaction with the I132N, I132T, and 183S [35].
The biochemical parameters tested were in normal limits, according to the results obtained by Casado et al. [36]. However, the cranial magnetic resonance imaging (MRI) revealed distinct particularities in both patients. Both babies were heterozygous, but they had different features regarding the transferrin pattern following the tests performed. The suspicion of PMM2-CDG had been confirmed based on two atypical features such as tremor and the global cerebellar atrophy with vermis hypoplasia.
Considering that CDG-Ia affects several systems of organs, around 20% of infants usually do not survive the first months [37]. Unfortunately, the parents that are carriers for certain mutation(s) often find out when they conceive a child. In our case, the couple found out after the death of their second child.
Analogous to our case, we have started from the presumption that, according to which, each unexplained HF could represent a relevant pointer when we talk about PMM2-deficiency. Thus, we have found it appropriate to summarize the existing literature regarding the accumulation of fluid within the body compartments, as shown in Table 1. Moreover, it must be taking into consideration that mutations of ALG1 [38,39], ALG8 [40], Ih [40], and Ix [26], have been also associated with HF, but also with ascites or edema.
On the basis of Table 1, HF was reported in three studies [41,43,44], but it should also be mentioned that skin edema is usually considered as the first clinical sign specific to CDG [42,45]. Along with the previously mentioned clinical signs, pericardial effusion, large heart, thrombocytopenia, and ascites have also been encountered in cases of cardiomegaly [41,42,43,44,45].
Schollen et al. [46] have demonstrated that, from 92 independent pregnancies, in which both partners were at risk for CDG-Ia, the percentage of affected foetuses has been around 34%. This could be explained by the high frequency of the R141H mutation in the PMM2 gene, concluding that the recurrence risk is close to one-in-three in CDG-Ia families.
Unlike the westernised countries in which such genetic investigations are reimbursed through the public health system [47], for a mid-class country, such as Romania, the costs are quite prohibitive. On the other hand, the field of assisted human reproduction has expanded significantly in Romania in recent years, an IVF national program being developed in this context [48].
Based on the established methodology and following the transfer of the frozen embryo(s), only a biochemical pregnancy was obtained, despite our best efforts. Of the six embryos tested, three were euploids, one of which had compound heterozygosity (PMM2 at exon 5 and 6) and the other two were simple heterozygotes (PMM2 at exon 5 and 6).
Despite the fact that preimplantation genetic testing (PGT) is commonly used in current clinical practice, this is the first case of IVF associated with PGT-M, according to our best of knowledge.

It can be concluded, based on the results of our case report and of the existing literature, that CDG-Ia is one of the most debilitating inherited disorders, which affects the entire homeostasis of the organism. Although no therapy or treatment has been developed, we consider it suitable to report the outcome of a PGT-M associated with IVF. This may increase awareness regarding the importance of developing a sustainable strategy for rare disorders such as CDG-Ia in the near future.

Funding information is not applicable.

The authors would like to thank the patients for their collaboration. 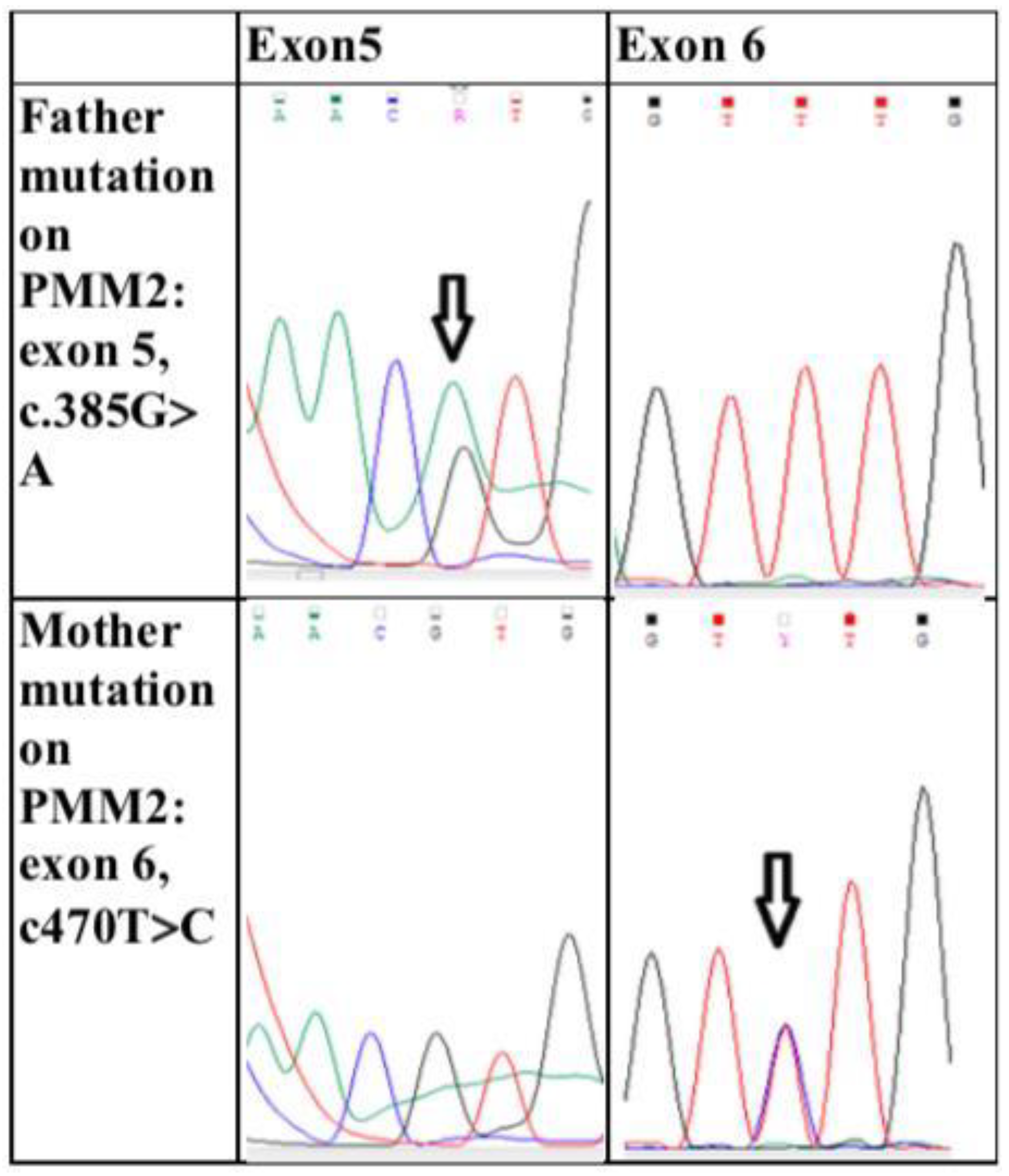