Aspects of Multicellularity in Saccharomyces cerevisiae Yeast: A Review of Evolutionary and Physiological Mechanisms
Previous Article in Journal

Malignant peripheral nerve sheath tumors (MPNST) are rare, aggressive soft tissue sarcomas that occur with significantly increased incidence in people with the neuro-genetic syndrome neurofibromatosis type I (NF1). These complex karyotype sarcomas are often difficult to resect completely due to the involvement of neurovascular bundles, and are relatively chemotherapy- and radiation-insensitive. The lifetime risk of developing MPNST in the NF1 population has led to great efforts to characterize the genetic changes that drive the development of these tumors and identify mutations that may be used for diagnostic or therapeutic purposes. Advancements in genetic sequencing and genomic technologies have greatly enhanced researchers’ abilities to broadly and deeply investigate aberrations in human MPNST genomes. Here, we review genetic sequencing efforts in human MPNST samples over the past three decades. Particularly for NF1-associated MPNST, these overall sequencing efforts have converged on a set of four common genetic changes that occur in most MPNST, including mutations in neurofibromin 1 (NF1), CDKN2A, TP53, and members of the polycomb repressor complex 2 (PRC2). However, broader genomic studies have also identified recurrent but less prevalent genetic variants in human MPNST that also contribute to the molecular landscape of MPNST and may inform further research. Future studies to further define the molecular landscape of human MPNST should focus on collaborative efforts across multiple institutions in order to maximize information gathered from large numbers of well-annotated MPNST patient samples, both in the NF1 and the sporadic MPNST populations. View Full-Text
Keywords: MPNST; NF1; genomics MPNST; NF1; genomics
►▼ Show Figures 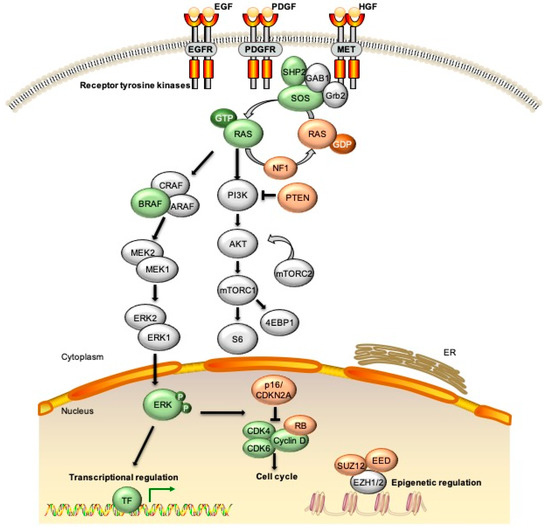