Progress in genetic engineering over the past few decades has made it possible to develop methods that have led to the production of transgenic animals. The development of transgenesis has created new directions in research and possibilities for its practical application. Generating transgenic animal species is not only aimed towards accelerating traditional breeding programs and improving animal health and the quality of animal products for consumption but can also be used in biomedicine. Animal studies are conducted to develop models used in gene function and regulation research and the genetic determinants of certain human diseases. Another direction of research, described in this review, focuses on the use of transgenic animals as a source of high-quality biopharmaceuticals, such as recombinant proteins. The further aspect discussed is the use of genetically modified animals as a source of cells, tissues, and organs for transplantation into human recipients, i.e., xenotransplantation. Numerous studies have shown that the pig (Sus scrofa domestica) is the most suitable species both as a research model for human diseases and as an optimal organ donor for xenotransplantation. Short pregnancy, short generation interval, and high litter size make the production of transgenic pigs less time-consuming in comparison with other livestock species This review describes genetically modified pigs used for biomedical research and the future challenges and perspectives for the use of the swine animal models. View Full-Text
Keywords: genetically modified pigs; genome modifications; transgenic pigs; genetic engineering; disease models; recombinant proteins; xenotransplantation genetically modified pigs; genome modifications; transgenic pigs; genetic engineering; disease models; recombinant proteins; xenotransplantation
►▼ Show Figures 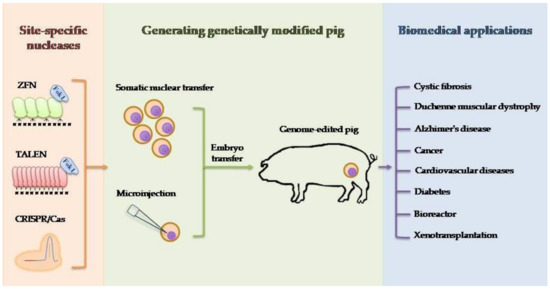