Conservation of genetic resources is of great concern globally to maintain genetic diversity for sustainable food security. Comprehensive identification of the breed composition, estimation of inbreeding and effective population size are essential for the effective management of farm animal genetic resources and to prevent the animals from genetic erosion. The Zhongwei male (ZWM), Arbas Cashmere male (ACM) and Jining Grey male (JGM) goats are conserved in three different state goat farms in China but their family information, level of inbreeding and effective population size are unknown. We investigated the genomic relationship, inbreeding coefficient and effective population size in these three breeds from three state goat farms using the Illumina goat SNP50 BeadChip. Genomic relationships and phylogenetic analysis revealed that the breeds are clearly separated and formed separate clusters based on their genetic relationship. We obtained a high proportion of informative SNPs, ranging from 91.8% in the Arbas Cashmere male to 96.2% in the Jining Grey male goat breeds with an average mean of 96.8%. Inbreeding, as measured by FROH, ranged from 1.79% in ZWM to 8.62% in ACM goat populations. High FROH values, elevated genomic coverage of very long ROH (>30 Mb) and severe decline in effective population size were recorded in ACM goat farm. The existence of a high correlation between FHOM and FROH indicates that FROH can be used as an alternative to inbreeding estimates in the absence of pedigree records. The Ne estimates 13 generations ago were 166, 69 and 79 for ZWM, ACM and JGM goat farm, respectively indicating that these goat breeds were strongly affected by selection pressure or genetic drift. This study provides insight into the genomic relationship, levels of inbreeding and effective population size in the studied goat populations conserved in the state goat farms which will be valuable in prioritizing populations for conservation and for developing suitable management practices for further genetic improvement of these Chinese male goats. View Full-Text
Keywords: SNP; Ne; inbreeding coefficient; genome coverage; runs of homozygosity SNP; Ne; inbreeding coefficient; genome coverage; runs of homozygosity
►▼ Show Figures 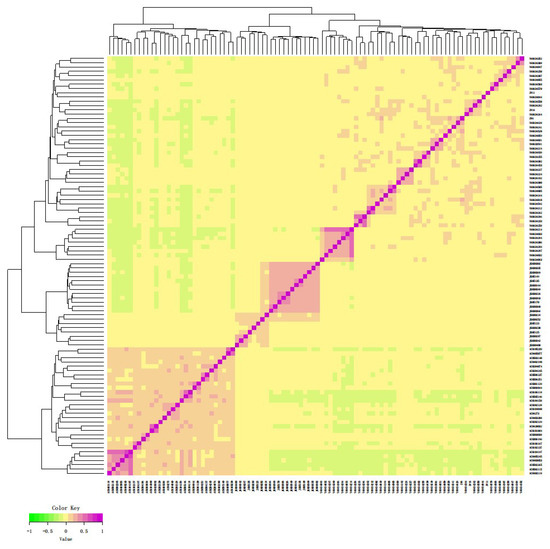