The bighead carps of the genus Hypophthalmichthys (H. molitrix and H. nobilis) are important aquaculture species. They were subjected to extensive multidisciplinary research, but with cytogenetics confined to conventional protocols only. Here, we employed Giemsa-/C-/CMA3- stainings and chromosomal mapping of multigene families and telomeric repeats. Both species shared (i) a diploid chromosome number 2n = 48 and the karyotype structure, (ii) low amount of constitutive heterochromatin, (iii) the absence of interstitial telomeric sites (ITSs), (iv) a single pair of 5S rDNA loci adjacent to one major rDNA cluster, and (v) a single pair of co-localized U1/U2 snDNA tandem repeats. Both species, on the other hand, differed in (i) the presence/absence of remarkable interstitial block of constitutive heterochromatin on the largest acrocentric pair 11 and (ii) the number of major (CMA3-positive) rDNA sites. Additionally, we applied here, for the first time, the conventional cytogenetics in H. harmandi, a species considered extinct in the wild and/or extensively cross-hybridized with H. molitrix. Its 2n and karyotype description match those found in the previous two species, while silver staining showed differences in distribution of major rDNA. The bighead carps thus represent another case of taxonomic diversity not associated with gross karyotype differentiation, where 2n and karyotype structure cannot help in distinguishing between genomes of closely related species. On the other hand, we demonstrated that two cytogenetic characters (distribution of constitutive heterochromatin and major rDNA) may be useful for diagnosis of pure species. The universality of these markers must be further verified by analyzing other pure populations of bighead carps. View Full-Text
Keywords: comparative fish cytogenetics; cytotaxonomy; chromosome banding; East Asian cypriniform fishes; FISH; rDNA; snDNA comparative fish cytogenetics; cytotaxonomy; chromosome banding; East Asian cypriniform fishes; FISH; rDNA; snDNA
►▼ Show Figures 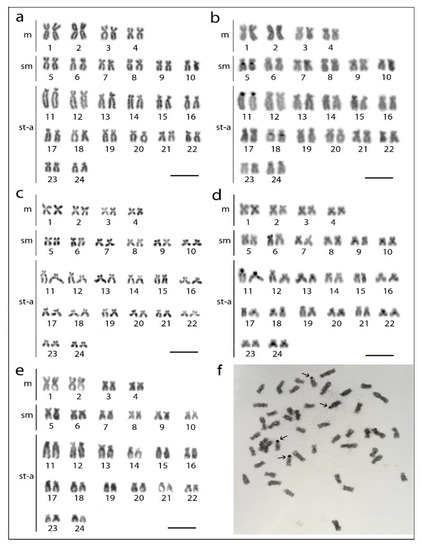