Genetic Differentiation in Hatchery and Stocked Populations of Sea Trout in the Southern Baltic: Selection Evidence at SNP Loci

The impacts and interactions between hatchery-bred fish and wild fish populations has been a topic of active investigation in recent decades. In some instances, the benefits of stocking can be overshadowed by negative effects such as genetic introgression with natural populations, loss of genetic diversity, and dilution of local adaptations. Methods that facilitate the identification of stocked fish enable us to estimate not only the effectiveness of stocking but also the level of natural reproduction and the degree of hybridization. The longest Baltic river, the Vistula, also has the second highest discharge. Historically, it hosted numerous populations of the anadromous form of brown trout (sea trout); however, dam construction has since interfered with and reduced spawning migration to a rate that is much lower than before. Reduced spawning has resulted in a population collapse and a negative flow-on effect on commercial catches. In response, Poland (along with many other Baltic countries) initiated an intensive stocking program which continues today and which sees the average annual release of 700,000 smolts. As a consequence, today’s main-river and inshore catches come from stock-enhanced populations. High-throughput single-nucleotide polymorphism (SNP) genotyping was performed on samples of sea trout from southern Baltic populations; results suggest that a significant portion of the sea trout catches in the Vistula mouth region have direct hatchery origin and indicate the presence of Pomeranian specimens. SNP loci identified as outliers indicate a potential selection pressure that may be related with effects of hatchery breeding and mixing with natural populations. The brown trout SNP array applied in this study showed high effectiveness not only for population differentiation, but more importantly, it emerged as a sensitive tool to provide evidence of detection selection. View Full-Text
Keywords: sea trout; SNP genotyping; stock composition sea trout; SNP genotyping; stock composition
►▼ Show Figures 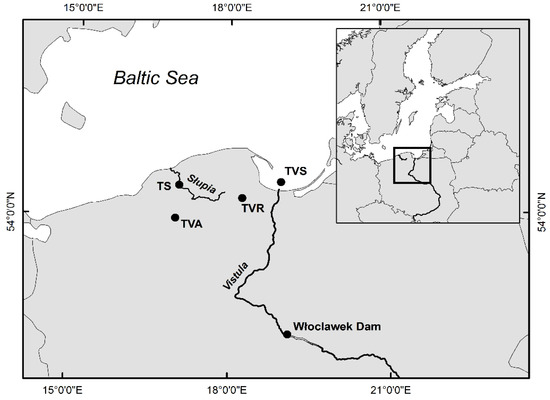