A Tangle of Genomic Aberrations Drives Multiple Myeloma and Correlates with Clinical Aggressiveness of the Disease: A Comprehensive Review from a Biological Perspective to Clinical Trial Results

46,XY,r(8)/45,XY,−8 Mosaicism as a Possible Mechanism of the Imprinted Birk-Barel Syndrome: A Case Study

Ring chromosome 8 (r(8)) is one of the least frequent ring chromosomes. Usually, maternal chromosome 8 forms a ring, which can be lost from cells due to mitotic instability. The 8q24 region contains the imprinted KCNK9 gene, which is expressed from the maternal allele. Heterozygous KCNK9 mutations are associated with the imprinting disorder Birk-Barel syndrome. Here, we report a 2.5-year-old boy with developmental delay, microcephaly, dysmorphic features, diffuse muscle hypotonia, feeding problems, motor alalia and noncoarse neurogenic type of disturbance of muscle electrogenesis, partially overlapping with Birk-Barel syndrome phenotype. Cytogenetic analysis of lymphocytes revealed his karyotype to be 46,XY,r(8)(p23q24.3)[27]/45,XY,−8[3]. A de novo 7.9 Mb terminal 8p23.3p23.1 deletion, a 27.1 Mb 8p23.1p11.22 duplication, and a 4.4 Mb intact segment with a normal copy number located between them, as well as a 154-kb maternal LINGO2 gene deletion (9p21.2) with unknown clinical significance were identified by aCGH + SNP array. These aberrations were confirmed by real-time PCR. According to FISH analysis, the 8p23.1-p11.22 duplication was inverted. The ring chromosome originated from maternal chromosome 8. Targeted massive parallel sequencing did not reveal the KCNK9 mutations associated with Birk-Barel syndrome. Our data allow to assume that autosomal monosomy with inactive allele of imprinted gene arising from the loss of a ring chromosome in some somatic cells may be an etiological mechanism of mosaic imprinting disorders, presumably with less severe phenotype.
Keywords: ring chromosome 8; invdupdel(8p); Birk-Barel syndrome; KCNK9; imprinting ring chromosome 8; invdupdel(8p); Birk-Barel syndrome; KCNK9; imprinting

Ring chromosome 8 (r(8)) is a rare abnormality. It accounts for 4% of all rings [1]. Patients with nonsupernumerary r(8) are characterized by short stature, microcephaly, and variable intellectual disability, without major anomalies [2]. A mosaic karyotype with a monosomy 8 cell line due to r(8) loss is frequently observed in such individuals.
One of the main mechanisms of ring chromosome formation is through invdupdel rearrangements, which are then stabilized by circularization [3]. Duplications just proximal to the deletion breakpoint account for approximately 21% of ring chromosome cases [4]. The first invdupdel(8p) case was presented by Weleber and colleagues in 1976 [5]. The incidence of invdupdel(8p) in the general population is estimated as 1 per 10,000–30,000 liveborn infants [6]. The rearrangement consists of a terminal deletion followed by an inverted duplication. There may be an intact segment between the duplicated and deleted regions if one of the parents carries an inversion. The proximal 8p23 region is predisposed to polymorphic inversion between two olfactory receptor gene clusters, which increases susceptibility to 8p rearrangements during meiotic chromosome segregation [7,8,9]. The frequency of this inversion is 27% in the normal Japanese population and 26% in the European population [7,10]. To date, only 11 patients with invdupdel(8p) have been described [6,8,11]. The mothers of all these patients were heterozygous carriers of paracentric 8p23.1 inversion. Therefore, it has been assumed that this aberration appears during maternal meiosis.
The 8q24.3 region contains the imprinted KCNK9 gene (OMIM [12] 605874). This gene belongs to the family of two-pore domain potassium channel genes, which regulate the resting membrane potential and influence action potential duration and neuron firing frequency [13]. This gene encodes the TASK-3 protein, which in humans is expressed in the brain with particularly high levels in the cerebellum [14], where it participates in the development and maturation of cerebellar neurons [15]. Ruf and colleagues showed the KCNK9 expression from the maternal allele in fetal human brain and adult mouse brain [16].
Heterozygous mutations in the KCNK9 gene on the maternal allele led to Birk-Barel syndrome (BBS; OMIM 612292) [17,18,19]. This syndrome is characterized by congenital central hypotonia, severe feeding difficulties, delayed development/intellectual disability, and characteristic dysmorphic features. To date, approximately two dozen individuals with a molecularly confirmed diagnosis have been reported [17,18,19].
There are five major causes of imprinting disorders: deletions or duplications of the imprinted gene, uniparental disomy (UPD), point mutations in the imprinted gene, and mutations in imprinting control centers. One can assume that autosomal monosomy with inactive allele of imprinted gene arising from the loss of a ring chromosome in some somatic cells may be an additional etiological mechanism of mosaic imprinting disorders, presumably with less severe phenotype. To date, there is only one description of a patient with Prader-Willi syndrome (PWS) and a non-mosaic r(15) of paternal origin in blood culture [20]. The authors suggest that this may be due to partial inactivation of the PWS region due to position effects or that the ring might have been lost in some tissues, leading to an absence of the imprinted genes on paternal chromosome 15. It has been observed that several patients with r(15) had multiple PWS features: short stature, low birth weight, hypotonia, small hands and feet, intellectual disability, and others. It seems that the combination of features and their severity may depend on the proportion of cells with autosomal monosomy due to ring chromosome loss and their tissue distribution.
Here, we report a patient with mosaic karyotype presented by two cell clones with r(8) of maternal origin and monosomy 8 due to the loss of the ring chromosome. The patient had hypotonia and a noncoarse neurogenic type of disturbance of muscle electrogenesis (ENMG neurogenic pattern), which with normal conductivity along the motor fibers of peripheral nerves, does not exclude one of the genetic variants of spinal muscular atrophy (SMA) or atypical SMA and may be consistent with clinical features of BBS.

The patient, a boy 1 year and 4 months old, was born from a second pregnancy. The first pregnancy ended in miscarriage. The patient was a single birth to nonconsanguineous, healthy parents. His pedigree was unremarkable. Written informed consent was obtained from the parents of the patient for the publication of the clinical data and pictures. The study was approved by the local Research Ethics Committee of the Research Institute of Medical Genetics, Tomsk NRMC (no. 106 from 27 June 2017).
The patient was born at the 38th week of gestation. His birth weight was 2720 g (3–10th centile), birth length was 48 cm (10th centile), head circumference was 31 cm (<3rd centile), and chest circumference was 31 cm (3rd centile). His Apgar score was 8. Preauricular tag of the left ear, curvature of the nasal septum to the left, and pectus excavatum of the right foot were observed at birth. The early development of the child showed pronounced delays.
When the boy was 1 year old, echoencephalography showed ventriculomegaly, and echocardiography revealed a small heart abnormality, patent foramen ovale. When the patient was 1 year and 4 months of age, his height was 80 cm (75th centile), his weight was 8.6 kg (3rd centile), and his head circumference was 40.5 cm (<3rd centile). His constitution was disproportionate and asthenic. There was a severe delay in neuropsychological development. The boy could not stand up or remain standing on his own and walked only with bilateral support; he did not sit on his own but remained seated when already sitting. His gait was hesitant, and he slightly tightened his left leg (extra step). The patient held his posture weakly, i.e., his back was rounded. He did not crawl or turn over while lying on his stomach, and his support when on his hands was weak. A more detailed clinical description of the patient at the time of cytogenetic analysis is shown in Table 1.
At the time of last examination, the boy was 2.5 years old (Figure 1). He had dolichocephaly, narrowing of the skull in the temporal areas, an elongated face, bushy eyebrows, long eyelashes, conjunctivitis, abnormal ears with a preauricular tag of the left ear, macrotia, a high and narrow nasal bridge with a broad nasal tip, a short and broad philtrum, hypotonia of the mandible, micrognathia, an open mouth, thick lips, widely spaced teeth, and motor alalia. The child swallowed only liquid food. Gastroesophageal reflux was constantly present. The tone of the chewing and temporal muscles was reduced, as were facial movements. There were problems with fine motor skills. The patient walked with support only, and the gait was abnormal. Contact with the child was difficult, as there were periods of increased excitability, and the child was unemotional.

Banding cytogenetic analysis was performed based on GTG-banded metaphases from peripheral blood lymphocytes from the patient at a 400-band resolution.
A neurologist diagnosed diffuse muscle hypotonia and moderate proximal muscle weakness. According to electroneuromyography (ENMG), the boy had a noncoarse neurogenic type of disturbance of muscle electrogenesis (ENMG neurogenic pattern), which, with normal conductivity along the motor fibers of peripheral nerves, does not exclude one of the genetic variants of spinal muscular atrophy (SMA) or atypical SMA.

Target sequences within the deleted chromosomal regions 8p23.3-p23.1 and 9p21.1 and specific amplification primers for quantitative real-time PCR assays were selected using Primer 3 software [28] (Table S1). The presence of 8p23.3-p23.1 and 9p21.1 microdeletions was tested using genomic DNA from peripheral blood lymphocytes from the patient and his parents using the AriaMx Real-Time PCR System (Agilent Technologies). Control genomic DNA was obtained from the peripheral blood lymphocytes of a healthy donor. Written informed consent was obtained from the donor. The control gene was HEXB, which encodes the β subunit of hexosaminidase and is located at 5q13 (Table S1). Real-time PCR was conducted using 25 ng of DNA (10 ng/μL), 2.5 μL (1 μM/L) of forward and reverse primers, 12.5 μL of 2× BioMaster HS-qPCR SYBR Blue (BioLabMix, Novosibirsk, Russia), and RNase-free water to 20 μL (per one well). The real-time PCR conditions were as follows: initial incubation at 95 °C for 10 min followed by 40 cycles of 15 s at 95 °C, 30 s at 60 °C, and 30 s at 72 °C. Three technical replicates were run for each sample. The obtained values of CT for test and reference (control) DNA amplification with primers for test and reference genes were analyzed using the following: average value for CT, logQT test primer = (Ct test DNA − CT reference DNA)/slope, (logQT test primer − log QT control primer), and fold change = 10logQT test primer − logQT control primer. Fold change values were used to build chart.

This study was supported by the Russian Science Foundation (project 16-15-10231).

We would like to thank the family of our patient for their assistance. 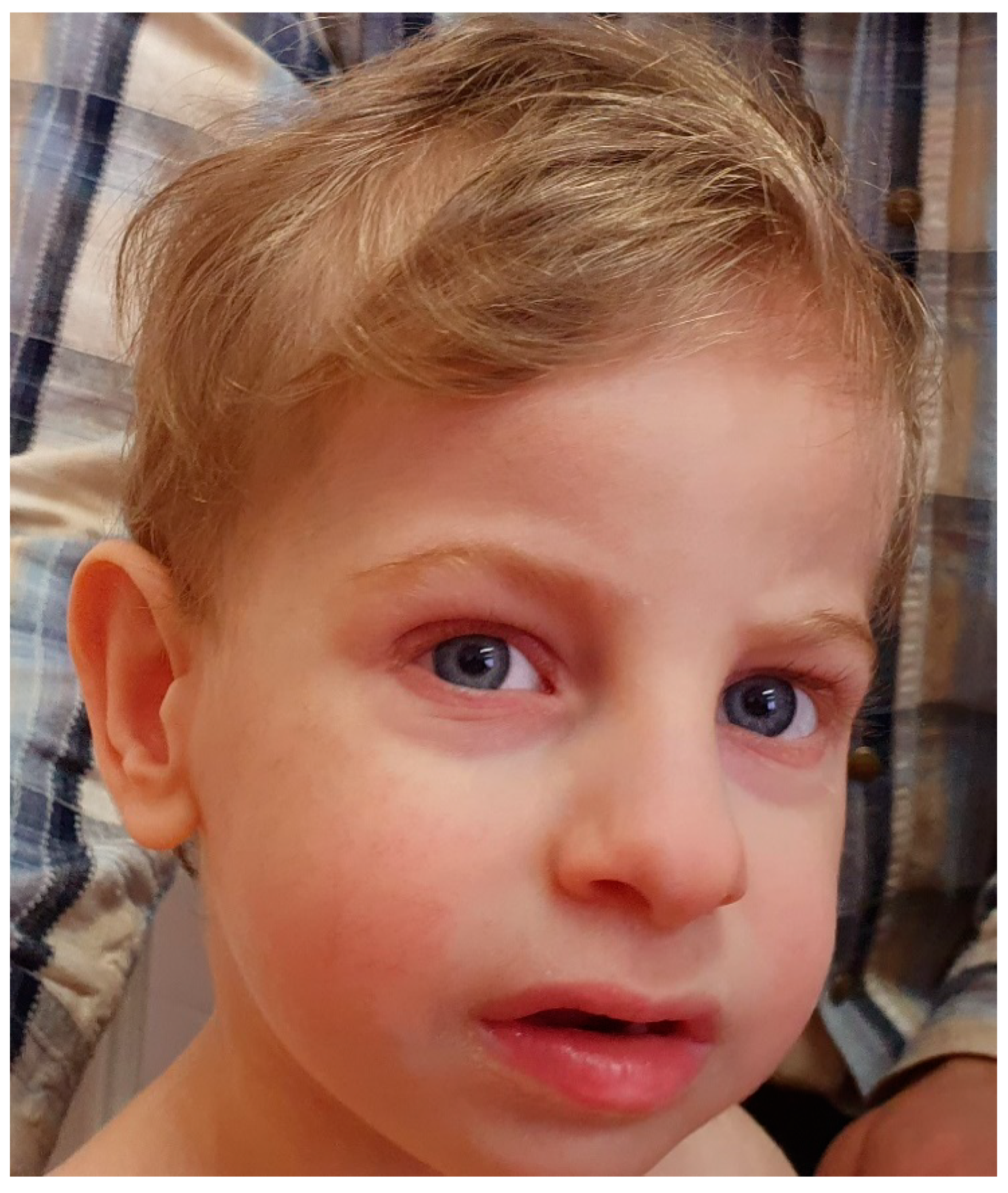