Staphylococcus aureus is a major human pathogen and an important cause of livestock infections. More than 20 staphylococcal enterotoxins with emetic activity can be produced by specific strains responsible for staphylococcal food poisoning, one of the most common food-borne diseases. Whole genome sequencing provides a comprehensive view of the genome structure and gene content that have largely been applied in outbreak investigations and genomic comparisons. In this study, six enterotoxigenic S. aureus strains were characterised using a combination of molecular, phenotypical and computational methods. The genomes were analysed for the presence of virulence factors (VFs), where we identified 110 genes and classified them into five categories: adherence (n = 31), exoenzymes (n = 28), genes involved in host immune system evasion (n = 7); iron uptake regulatory system (n = 8); secretion machinery factors and toxins’ genes (n = 36), and 39 genes coding for transcriptional regulators related to staphylococcal VFs. Each group of VFs revealed correlations among the six enterotoxigenic strains, and further analysis revealed their accessory genomic content, including mobile genetic elements. The plasmids pLUH02 and pSK67 were detected in the strain ProNaCC1 and ProNaCC7, respectively, carrying out the genes sed, ser, and selj. The genes carried out by prophages were detected in the strain ProNaCC2 (see), ProNaCC4, and ProNaCC7 (both positive for sea). The strain ProNaCC5 resulted positive for the genes seg, sei, sem, sen, seo grouped in an exotoxin gene cluster, and the strain ProNaCC6 resulted positive for seh, a transposon-associated gene. The six strains were used for the production of naturally contaminated cheeses which were tested with the European Screening Method for staphylococcal enterotoxins. The results obtained from the analysis of toxins produced in cheese, combined with the genomic features represent a portrait of the strains that can be used for the production of staphylococcal enterotoxin-positive cheese as reference material. View Full-Text
Keywords: staphylococcal enterotoxins; annotation; Staphylococcus aureus staphylococcal enterotoxins; annotation; Staphylococcus aureus
►▼ Show Figures 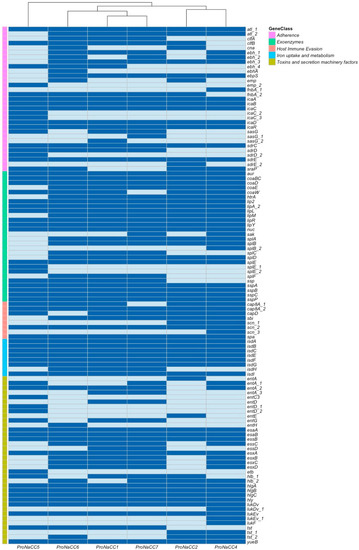