Rangifer tarandus, known as caribou or reindeer, is a widespread circumpolar species which presents significant variability in their morphology, ecology, and genetics. A genome was sequenced from a male boreal caribou (R. t. caribou) from Manitoba, Canada. Both paired end and Chicago libraries were constructed and sequenced on Illumina platforms. The final assembly consists of approximately 2.205 Gb, and has a scaffold N50 of 11.765 Mb. BUSCO (Benchmarking Universal Single-Copy Orthologs) reconstructed 3820 (93.1%) complete mammalian genes, and genome annotation identified the locations of 33,177 protein-coding genes. An alignment to the bovine genome was carried out, indicating sequence coverage on all bovine chromosomes. A high-quality reference genome will be invaluable for evolutionary research and for conservation efforts for the species. Further information about the genome, including a FASTA file of the assembly and the annotation files, is available on our caribou genome website. Raw sequence data is available at the National Centre for Biotechnology Information (NCBI), under the BioProject accession number PRJNA549927. View Full-Text
Keywords: caribou; reindeer; Rangifer tarandus; genome; genome assembly caribou; reindeer; Rangifer tarandus; genome; genome assembly
►▼ Show Figures 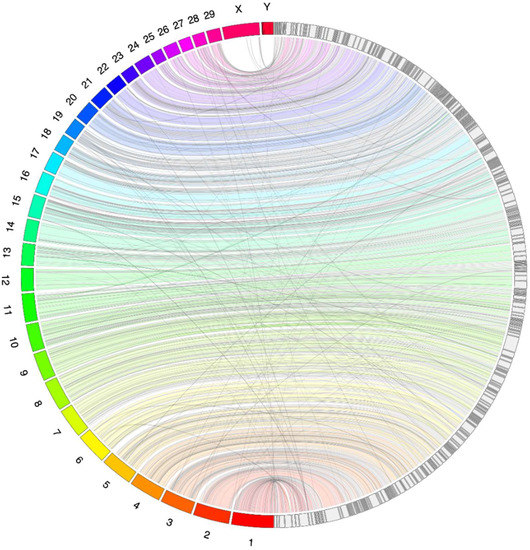