Hair of the Dog: Identification of a Cis-Regulatory Module Predicted to Influence Canine Coat Composition

The Kelpie is a breed developed in Australia for use as a livestock herding dog. It has been proposed that the development of the breed included gene flow from the Australian Dingo (Canis dingo), a canid species present on the Australian continent for around 4000 years. The Kelpie breed is split between working and conformation types that have readily recognizable differences in external morphology. We characterize known gene variants relating to external morphology in sequenced representatives of both Kelpie types (Australian Kelpie—conformation; Australian Working Kelpie—herding) and compare the variants present with those in sequenced Australian Dingoes, including 25 canids with locus-constrained data and one with a whole genome sequence. Variants assessed include identified coat color and ear morphology variants. We describe a new variant site in the transcribed region of methionine sulfoxide reductase 3 that may relate to ear phenotype. None of the morphology variants analyzed offer support for co-ancestry of the Kelpie breed with the Australian Dingo. View Full-Text
Keywords: coat-color; ear-type; Australian working Kelpie; Australian Kelpie; Dingo coat-color; ear-type; Australian working Kelpie; Australian Kelpie; Dingo
►▼ Show Figures 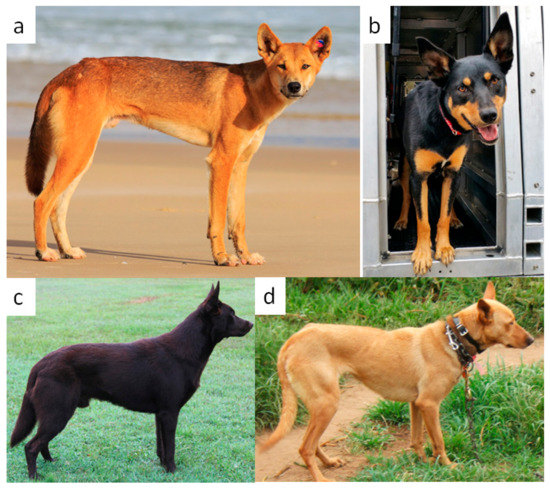