Micromanagement of Developmental and Stress-Induced Senescence: The Emerging Role of MicroRNAs
Previous Article in Journal

Çatalhöyük is one of the most widely recognized and extensively researched Neolithic settlements. The site has been used to discuss a wide range of aspects associated with the spread of the Neolithic lifestyle and the social organization of Neolithic societies. Here, we address both topics using newly generated mitochondrial genomes, obtained by direct sequencing and capture-based enrichment of genomic libraries, for a group of individuals buried under a cluster of neighboring houses from the classical layer of the site’s occupation. Our data suggests a lack of maternal kinship between individuals interred under the floors of Çatalhöyük buildings. The findings could potentially be explained either by a high variability of maternal lineages within a larger kin group, or alternatively, an intentional selection of individuals for burial based on factors other than biological kinship. Our population analyses shows that Neolithic Central Anatolian groups, including Çatalhöyük, share the closest affinity with the population from the Marmara Region and are, in contrast, set further apart from the Levantine populations. Our findings support the hypothesis about the emergence and the direction of spread of the Neolithic within Anatolian Peninsula and beyond, emphasizing a significant role of Central Anatolia in this process. View Full-Text
Keywords: ancient DNA; Neolithic; kinship ancient DNA; Neolithic; kinship
►▼ Show Figures 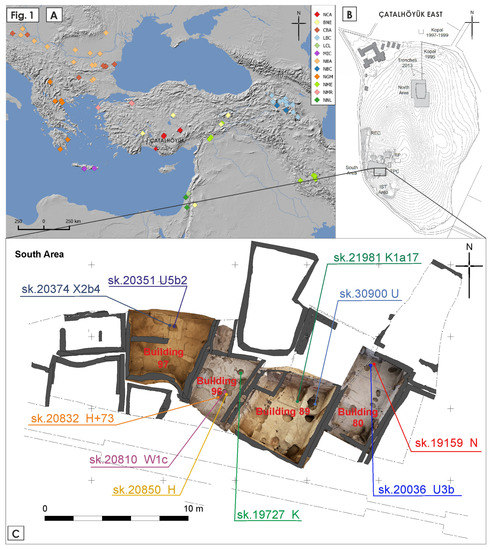