Retinogenesis of the Human Fetal Retina: An Apical Polarity Perspective
Next Article in Special Issue

The Molecular Genetics of Gordon Syndrome

Gordon syndrome is a rare inherited monogenic form of hypertension, which is associated with hyperkalaemia and metabolic acidosis. Since the recognition of this predominantly autosomal dominant condition in the 1960s, the study of families with Gordon syndrome has revealed four genes WNK1, WNK4, KLHL3, and CUL3 to be implicated in its pathogenesis after a phenotype–genotype correlation was realised. The encoded proteins Kelch-like 3 and Cullin 3 interact to form a ring-like complex to ubiquitinate WNK-kinase 4, which, in normal circumstances, interacts with the sodium chloride co-symporter (NCC), the epithelial sodium channel (ENaC), and the renal outer medullary potassium channel (ROMK) in an inhibitory manner to maintain normokalaemia and normotension. WNK-kinase 1 has an inhibitory action on WNK-kinase 4. Mutations in WNK1, WNK4, KLHL3, and CUL3 all result in the accumulation of WNK-kinase 4 and subsequent hypertension, hyperkalaemia, and metabolic acidosis. This review explains the clinical aspects, disease mechanisms, and molecular genetics of Gordon syndrome. View Full-Text
Keywords: Gordon syndrome; tubulopathy; genetics; WNK1; WNK4; KLHL3; CUL3 Gordon syndrome; tubulopathy; genetics; WNK1; WNK4; KLHL3; CUL3
►▼ Show Figures 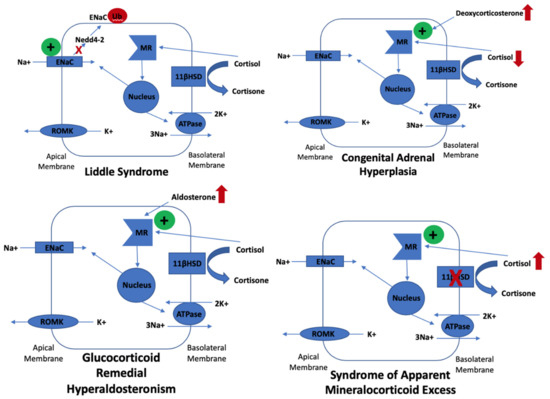