Prader–Willi syndrome (PWS) is an imprinting genetic disorder characterized by lack of expression of genes on the paternal chromosome 15q11–q13 region. Growth hormone (GH) replacement positively influences stature and body composition in PWS. Our hypothesis was that early diagnosis delays onset of obesity in PWS. We studied 352 subjects with PWS, recruited from the NIH Rare Disease Clinical Research Network, to determine if age at diagnosis, ethnicity, gender, and PWS molecular class influenced the age they first become heavy, as determined by their primary care providers, and the age they first developed an increased appetite and began seeking food. The median ages that children with PWS became heavy were 10 years, 6 years and 4 years for age at diagnosis < 1 year, between 1 and 3 years, and greater than 3 years of age, respectively. The age of diagnosis and ethnicity were significant factors influencing when PWS children first became heavy (p < 0.01), however gender and the PWS molecular class had no influence. Early diagnosis delayed the onset of becoming heavy in individuals with PWS, permitting early GH and other treatment, thus reducing the risk of obesity-associated co-morbidities. Non-white individuals had an earlier onset of becoming heavy.
Keywords: Prader–Willi syndrome; age diagnosis; obesity; deletion; uniparental disomy Prader–Willi syndrome; age diagnosis; obesity; deletion; uniparental disomy

Prader–Willi syndrome (PWS) affects about 1/15,000 individuals and is characterized by the lack of expression of genes on the paternal chromosome 15, located in the 15q11.2–q13 region [1,2,3]. The majority of imprinted genes in this region are involved in both RNA and protein processing of neuroregulators and hormones at the brain level. Disruptions in these genes negatively affect neuronal development, endocrine function and hormone levels, leading to the PWS phenotype [4,5,6,7]. Clinical features in the neonatal period include poor tone and suck, hypogonadism, feeding difficulty and failure to thrive. Later findings include a characteristic facial appearance, early-childhood onset of excessive hunger (hyperphagia), which can lead to morbid obesity if uncontrolled, mild intellectual disability, growth and other hormone deficiencies, leading to a short stature and small hands and feet, along with a distinctive behavioral phenotype, with temper tantrums, outbursts and self-injury (skin picking) [5,6,8]. Obesity related complications include cardiovascular problems, diabetes mellitus, hypertension, sleep apnea, gastric distension, necrosis, and choking as causes of death [4,9,10,11,12]. The diagnosis of PWS is often delayed, leading to excessive medical costs, parental anxiety and increased time before treatment with, e.g., growth hormone (GH) [13]. GH therapy in PWS allows for increased stature, muscle mass, strength and physical activity, thereby improving metabolic rate and energy expenditure, resulting in decreased fat mass and obesity status, particularly when administered at a young age [4,14,15,16,17,18,19]. When given at a young enough age, it improves the muscles used in sucking and feeding, enabling the avoidance of gastric tube placement. Although cognitive benefits of GH treatment have been identified in animal models and other patients with GH deficiencies, such ancillary effects of GH treatment in PWS have not been well studied. However, Dykens et al [20] showed the cognitive and adaptive advantages of early and continued GH treatment, and children with PWS who began treatment before 12 months of age had higher Nonverbal and Composite IQ scores than children who began treatment between 1 and 5 years of age. Most recently, Butler et al. [21] reported significantly higher IQ scores in the Vocabulary section of the Stanford–Binet test in the GH treated group when compared with non-GH treatment. These studies further emphasize the importance of earlier diagnosis and initiating treatment quickly.

Prader–Willi syndrome is a complex disorder of genomic imprinting caused by three main mechanisms, which ultimately results in a complete absence of paternally expressed genes in the 15q11.2–q13 region. The three PWS molecular genetic classes include a paternal deletion of the 15q11.2–q13 region (61% of cases), maternal uniparental disomy (UPD) 15 (36%), and an imprinting defect (ID) at 3% [22,23]. In the PWS chromosome region, the paternal gene copies are typically expressed, while the maternal alleles are silenced, due to a parent-of-origin specific imprinting process involving DNA methylation and other epigenetic factors during gametogenesis. The diagnosis of PWS is traditionally based on clinical suspicion and confirmed by a DNA methylation testing of chromosome 15, which detects 99% of individuals with PWS [4,6,24].
Driscoll et al. (2017) describes a comprehensive testing strategy to establish the specific genetic mechanism of an individual with DNA methylation analysis consistent with PWS [24]. Hartin et al. [25] provides an updated approach, using a genetic testing flow chart for PWS. The DNA methylation specific PCR (mPCR) test is the most rapid and cost-effective method to date in diagnosing PWS, however, it does not determine the specific PWS molecular classes. Chromosomal microarray analysis with SNP probes is currently the best method for identification of the individual PWS molecular classes, since it detects individuals with paternal 15q11–q13 deletions, segmental and total maternal isodisomy, and microdeletions of the imprinting center, however additional genetic testing is required in about 15% of patients in whom microarray results do not identify the genetic defect; the latter often requires parental DNA samples and chromosome 15 genotyping [22]. Methylation Specific -Multiplex Ligation-dependent Probe Amplification (MS-MLPA) of chromosome 15 and non-chromosome 15 polymorphic DNA markers may also be used to detect PWS once the diagnosis is under consideration [25,26,27]. In a study done by Bar et al. [28], the most common causes of delayed diagnosis in PWS were due to clinical features being missed in the neonatal period, as well as the use of fluorescence in situ hybridization (FISH) analysis for testing, which was the preferred method before the availability of methylation-specific PCR. FISH will only identify the 15q11–q13 deletion, which accounts for 60% of individuals with PWS, not maternal disomy 15 or imprinting defects. Next generation sequencing using chromosome 15 probes and, possibly, methylation-specific quantitative melting point analysis (MS-QMA) of imprinted genes in the chromosome 15 region, may become viable techniques in the future, to allow for more accurate and cost-efficient measures for early diagnosis, possibly including newborn screening [29,30].

The NIH-sponsored Rare Diseases Clinical Research Network (RDCRN) of the PWS/ Early Onset Morbidity (EMO) dataset was developed during the period 2008–2014, and data from the network were used in our study. Initially, the dataset was developed for natural history studies, characterization of diagnostic and therapeutic plans, and genotype–phenotype correlations in PWS. The RDCRN dataset has been utilized for several publications to date, which focused on the molecular and natural history, as well as the clinical characterization of PWS [5,25,31,32,33,34].
Our analysis was conducted on data collected from individuals with Prader–Willi syndrome recruited for the RDCRN Natural History 5202 protocol and stored at the Data Management Coordinating Center at the University of South Florida (Tampa), as described by Butler et al. [35]. The dataset included 355 individuals with genetically confirmed Prader–Willi syndrome, 37% of whom were diagnosed after the age of one year and 25% after the age of three years (with ages ranging from 1 month to 48 years). The age of diagnosis was elicited from the Natural History Form and approved by the local IRB Committees from the four participating clinic sites located in California, Kansas, Tennessee and Florida. If the data entry point was missing, then the age of diagnosis was defined as the age at which the last genetic test was performed on the enrolled subject.

Three variables from the Natural History Form were analyzed: Age when child was first reported to become heavy; Age at which increased appetite first developed and Age the child first started to seek food. The age the child first became “heavy” (e.g., at or above the 85th percentile for weight for age and gender) was determined with input from the primary care providers and historical records for the majority of subjects enrolled. The majority of subjects between ages 2–20 years, who first became heavy during the trial, had a BMI above the 85th percentile for age and gender.
The variables were analyzed by the Cox proportional hazards model and by developing Kaplan–Meier curves, as undertaken in other reports on PWS (e.g., [36]). The earliest reported age for each of these variables was used as the endpoint age for each variable. Subjects who did not indicate an age for the variable were considered censored at their last recorded age. Because of the large variability in age at diagnosis (ranging from approximately 1 month to 48 years), the age of diagnosis was categorized into three categories, based on age distribution (<1 year, ≥1 years and <3 years, and ≥3 years) with the majority (62%) diagnosed at <1 year and 26% diagnosed at ≥3 years. In addition to age of diagnosis (categorized), ethnic background (white vs. non-white), gender, and PWS molecular class were included as covariates in the Cox hazard model and analyzed for statistical significance.

Summaries of the number of subjects with PWS in each of the three age categories (<1 year, >1 years and <3 years, and ≥3 years) and other covariates are shown in Table 1. Kaplan–Meier curves for the age when the child first became heavy as determined by their primary care providers, age the child developed an increased appetite, and age the child began to actively seek food are shown in Figure 1, Figure 2 and Figure 3, respectively. The Cox proportional hazards analyses for these three variables are shown in Table 2. For example, individuals with PWS having an imprinting defect had a hazard ratio (HR) of 1.45 of becoming heavy, compared to UPD15 or 15q11–q13 deletion molecular genetic classes, but the number of subjects tested with imprinting defects was low. The 15q11–q13 deletion group had the highest HR of 1.31 for an increased appetite, as well as for actively seeking food, with an HR of 1.14.
Both the age of diagnosis (p < 0.001) and race (p = 0.004) were significant factors influencing the age when the child was first reported to be heavy. The earlier the diagnosis of PWS, the later the age at which individuals became heavy. The estimated median age for when the child first became heavy was 10 years for an age of diagnosis of < 1 year, 6 years for an age of diagnosis between 1 and 3 years, and 4 years for an age of diagnosis greater than 3 years. Additional partitions of age of diagnosis ≥ 3 years category were also examined, but no evidence was found that further partitioning into separate categories produced significant statistical differences. Non-white individuals became heavier at an earlier age, compared with whites, with an estimated median age of 4 years for non-whites and a median age of 8 years for whites. However, age of diagnosis and race did not influence the age at which individuals first developed an increased appetite or began actively seeking food. In addition, our data analysis indicates that the age the individual became heavy, age of increased appetite and age of seeking food were not significantly different across the three PWS molecular classes (deletion, UPD or imprinting defects), except for a difference between the 15q11–q13 deletion and UPD15 subjects regarding increased appetite (Figure 1, Figure 2 and Figure 3).

We thank the individuals with Prader–Willi syndrome, their families and their health care providers for their participation in the study. We acknowledge support from the Prader–Willi Syndrome Association (USA) and the Angelman, Rett and Prader–Willi Syndromes Consortium (U54 HD06122), which was part of the National Institutes of Health (NIH) Rare Disease Clinical Research Network (RDCRN) supported through collaboration between the NIH Office of Advancing Translational Science (NCATS), the National Institute of Child Health and Human Development (NICHD) and Data Management Coordinating Center of University of South Florida. We are very thankful for the invaluable help of the ICTS staff at the University of California-Irvine, as well as other institutions, for contributing their skills to the study. We thank Linda Freedkin for her assistance with the manuscript. 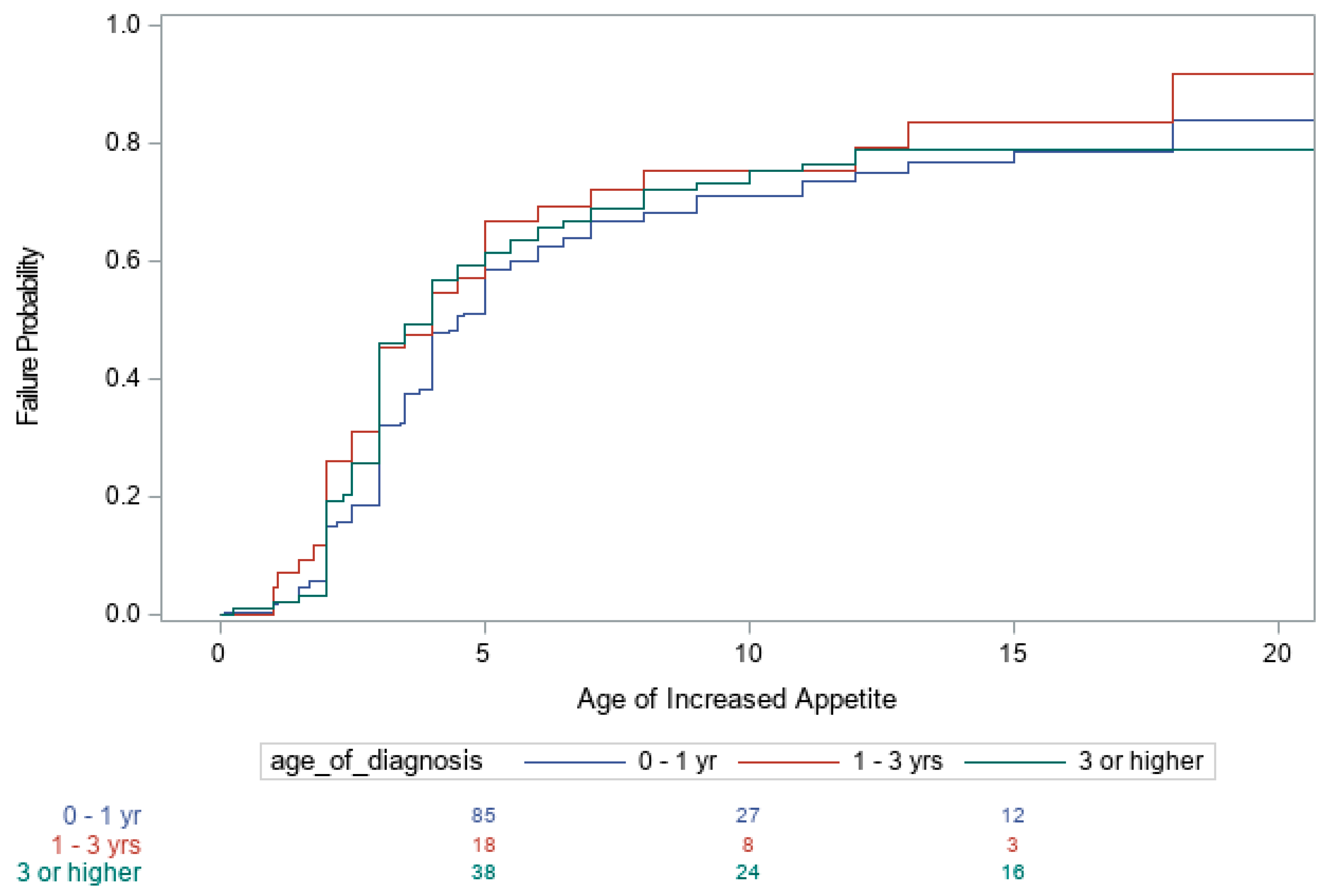 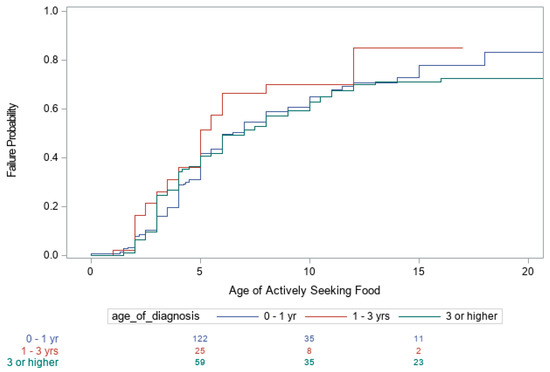 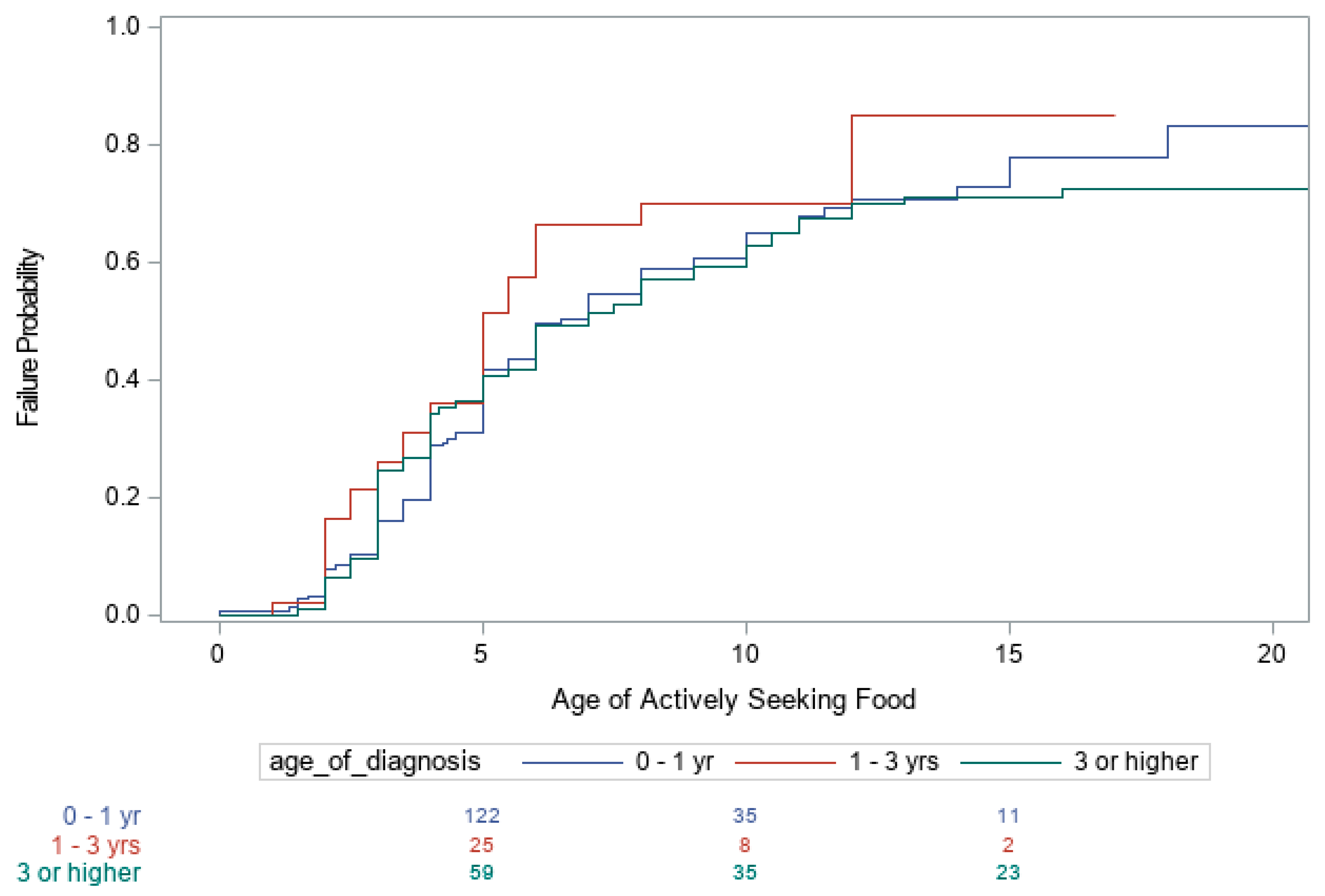