The Himalayas are one of earth’s hotspots of biodiversity. Among its many cryptic and undiscovered organisms, including vertebrates, this complex high-mountain ecosystem is expected to harbour many species with adaptations to life in high altitudes. However, modern evolutionary genomic studies in Himalayan vertebrates are still at the beginning. Moreover, in organisms, like most amphibians with relatively high DNA content, whole genome sequencing remains bioinformatically challenging and no complete nuclear genomes are available for Himalayan amphibians. Here, we present the first well-annotated multi-tissue transcriptome of a Greater Himalayan species, the lazy toad Scutiger cf. sikimmensis (Anura: Megophryidae). Applying Illumina NextSeq 500 RNAseq to six tissues, we obtained 41.32 Gb of sequences, assembled to ~111,000 unigenes, translating into 54362 known genes as annotated in seven functional databases. We tested 19 genes, known to play roles in anuran and reptile adaptation to high elevations, and potentially detected diversifying selection for two (TGS1, SENP5) in Scutiger. Of a list of 37 genes, we also identify 27 candidate genes for sex determination or sexual development, all of which providing the first such data for this non-model megophryid species. These transcriptomes will serve as a valuable resource for further studies on amphibian evolution in the Greater Himalaya as a biodiversity hotspot. View Full-Text
Keywords: Megophryidae; RNA-seq; high-altitude-specific genes; sex determination Megophryidae; RNA-seq; high-altitude-specific genes; sex determination
►▼ Show Figures 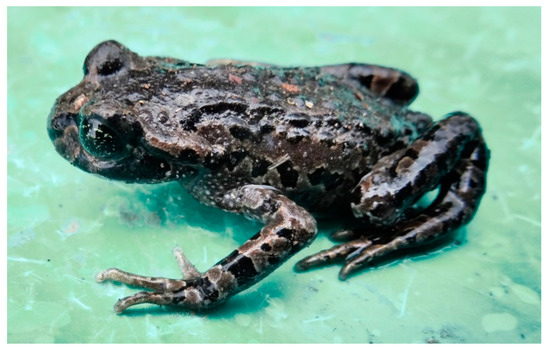