Sprouting angiogenesis is the formation of new capillaries from existing vessels in response to tissue hypoxia due to growth/development, repair/healing, and also chronic inflammation. In this study, we aimed to elucidate the effect of IL-6, a pleiotropic cytokine with both pro-inflammatory and anti-inflammatory functions, in regulating the sprouting angiogenic response of endothelial cells (ECs). We found that activation of IL-6 trans-signaling inhibited the migration, proliferation, and tube formation ability of ECs. In addition, inhibition of the autocrine IL-6 classic-signaling by depleting endogenous IL-6 from ECs impaired their tube formation ability. At the molecular level, we found that IL-6 trans-signaling in ECs upregulated established endogenous anti-angiogenic factors such as CXCL10 and SERPINF1 while at the same time downregulated known endogenous pro-angiogenic factors such as cKIT and CXCL8. Furthermore, prior activation of ECs by IL-6 trans-signaling alters their response to vascular endothelial growth factor-A (VEGF-A), causing an increased p38, but decreased Erk1/2 phosphorylation. Collectively, our data demonstrated the dual facets of IL-6 in regulating the sprouting angiogenic function of ECs. In addition, we shed light on molecular mechanisms behind the IL-6 trans-signaling mediated impairment of endothelial sprouting angiogenic response. View Full-Text
Keywords: VEGF-A signaling; neoangiogenesis; cytokine; Matrigel; HUVECs; IPA VEGF-A signaling; neoangiogenesis; cytokine; Matrigel; HUVECs; IPA
►▼ Show Figures 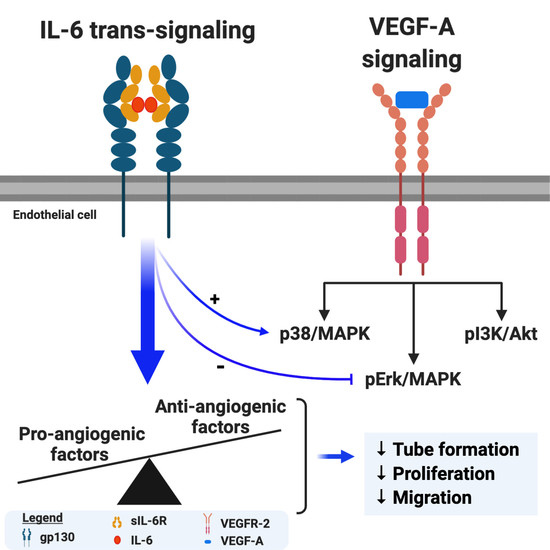