Centering and Shifting of Centrosomes in Cells
Previous Article in Journal

Centrioles and Ciliary Structures during Male Gametogenesis in Hexapoda: Discovery of New Models

The Enigma of Centriole Loss in the 1182-4 Cell Line

The Drosophila melanogaster cell line 1182-4, which constitutively lacks centrioles, was established many years ago from haploid embryos laid by females homozygous for the maternal haploid (mh) mutation. This was the first clear example of animal cells regularly dividing in the absence of this organelle. However, the cause of the acentriolar nature of the 1182-4 cell line remained unclear and could not be clearly assigned to a particular genetic event. Here, we detail historically the longstanding mystery of the lack of centrioles in this Drosophila cell line. Recent advances, such as the characterization of the mh gene and the genomic analysis of 1182-4 cells, allow now a better understanding of the physiology of these cells. By combining these new data, we propose three reasonable hypotheses of the genesis of this remarkable phenotype.
Keywords: centriole; centrosome; maternal haploid; Drosophila melanogaster; cell line; haploid cells centriole; centrosome; maternal haploid; Drosophila melanogaster; cell line; haploid cells

The centriole has likely been the subject of more controversy among cell biologists than any other organelle. As the structural core of the centrosome, the centriole was originally considered to be the “organ for cell division” by Van Beneden and Boveri, who discovered and investigated the centrosome in the 1880s [1]. Current consensus has established that animal cells can divide without centrioles, although the fidelity of chromosome segregation is impaired. Nevertheless, some organisms accomplish acentrosomal cell division as the normal course of development [1,2,3,4,5,6].
Despite recent advances in defining centriole biogenesis and the roles of centrioles in cell physiology [7,8,9,10,11,12,13,14], many questions still remain. In general, biologists aim to understand these issues concerning the centriole: (1) Why are centrioles and centrosomes necessary when mitosis can be accomplished without them? (2) How is the biogenesis of the centriole controlled?
The first example of an established animal cell line constitutively lacking centrioles was the 1182-4 Drosophila cell line. Although this has been firmly established by two extensive ultrastructural studies [15,16], the origin of this remarkable phenotype has remained elusive for many years. Recently, however, the 1182 mutated gene (renamed “maternal haploid (mh)”) has been characterized [17,18]. This allows us to re-examine this “cold case” and re-start the work where it left off. In this study, we review our current understanding of the maternal haploid “saga” from a historical perspective to explore the topic, connecting the original findings on the 1182-4 cell line with our understandings of the mh mutant that initiated the investigation. We bring new data concerning the genomic analysis of the 1182-4 cells. We conclude by discussing the possible explanations of the intriguing disappearance of centrioles in this cell line and aim to provide more clues to solve this longstanding mystery.

3. Historical Perspective: The Origins of the Acentriolar 1182-4 Drosophila Cell Line

4. Rebound: Identification of the mh Gene

The characterization of another «gynohaploid» fs(1) mutant named sésame (ssm) [38] reactivated the interest in mh in 2000. Complementation tests revealed that ssm and mh affected different genes, which was also evident from cytological analyses of fertilization. In eggs from ssm females, the male pronucleus remains abnormally small and condensed and is, in most cases, excluded from the first zygotic spindle [38,39]. In mh eggs, pronuclear formation appears normal but paternal chromosomes fail to properly recondense in the metaphase of the first mitosis. As a consequence, paternal chromatin forms a chromatin bridge in anaphase and telophase which eventually breaks, resulting in the random segregation of the paternal chromatin mass between the two sister nuclei [23]. About 20% of mh embryos escape this first catastrophic mitosis and develop as gynohaploids. The first gonomeric spindle in mh eggs appears normal, with two microtubule asters containing the centrosomal protein CP190. In many mh embryos, however, the first mitosis generates aneuploid nuclei occasionally associated with monoastral or anastral spindles [23]. Gynohaploid mh embryos that escape this early developmental arrest and are observed at the syncytial blastoderm stage contain a vast majority of bi-astral spindles. Thus, maternal effect mh mutant embryos may have centriole biogenesis defects in the early zygote but do not have a block in centriole duplication if the early arrest is overcome.
Early attempts to molecularly map the mh gene (positioned between the v and f markers) were hampered by the lack of deficiency chromosomes for this region [23]. Eventually, the availability of a molecularly mapped non-complementing deficiency allowed the identification of a strong candidate gene (CG9203). This candidate was validated as the mh gene with the isolation of a second mh mutant allele and rescue experiments with genomic transgenes [17].
The mh/CG9203 gene encodes the Drosophila ortholog of human Spartan/DVC1, a conserved metalloprotease originally characterized for its presumed role in translesion synthesis. More recently, Spartan was shown to be required for the processing of DNA-protein crosslinks (DPCs), a class of highly deleterious DNA damage caused by the covalent attachment of a variety of proteins to DNA bases. Work in human cells, yeast, nematodes, and flies have established that Spartan is required to remove protein adducts on DNA that can otherwise block the passage of the DNA replication complex [40]. Mutations in the human SPRTN gene cause Ruijs-Aalfs syndrome, a rare disease characterized by premature aging and cancer [41].
Surprisingly, sequencing the CG9203 gene from mh1 flies revealed the presence of five non-synonymous substitutions, including one that affects a highly conserved residue in the SprT domain (M151K) and likely inactivates protease activity [17]. The independent identification of mh by another group confirmed the presence of five point mutations in the mh1 stock, including the one in the SprT domain [42]. The origin of these additional SNPs in the mh1 allele is unclear, but their identification in the 1182 haploid cell line (see below) suggests that they were already present at the time of the mutagenesis or that they appeared shortly after. Intriguingly, mh was identified as one of the DNA repair genes with a significant adaptative natural variation to UVB light exposure [43], opening the possibility that these SNPs could indeed be natural variants.
Recently, Puah et al. found that haploid nuclei in mh embryos occasionally fuse during cleavage mitoses, giving rise to 2n, 3n, or 4n nuclei through a process named nuclear collisions [42]. Nuclear cleavage divisions in the Drosophila early embryo occur in a syncytium, where proper division relies on astral microtubules from centrosomes to provide spacing between nuclei and prevent nuclear collisions and consequent aneuploidy [44]. Thus, the nuclear collisions seen in mh mutant embryos are reminiscent of the nuclear fusions observed in centrosomin-deficient embryos [45], suggesting that mh could also affect centrosome function [42]. However, since other gynohaploid mutants were not examined in this study, it is not clear whether these nuclear fusions are just a consequence of haploid development. Although it is currently difficult to directly connect the molecular role of Spartan in DNA damage repair with the centrosome function, it is known that DNA replication stress in early Drosophila embryos induces centrosome inactivation [46]. This safeguarding mechanism allows the elimination of aneuploid or incompletely replicated nuclei from the developing embryo [47]. Recent work shows that mild replication stress causes premature centriole disengagement in early mitosis, [48] which could subsequently lead to centriole loss during division.
Although the essential function of Spartan in Drosophila is to maintain DNA integrity in the male pronucleus, Spartan is likely required throughout development [17,18,42]. It is thus conceivable that the loss of centrosomes in the 1182 cell line could be related to chronic DNA replication stress caused by the lack of Spartan activity (Hypothesis 1, Figure 1; see part 6).

7. Conclusions: Something Has Been Lost?

We cannot yet conclude at this stage what mechanism triggers centriole loss in the 1182-4 cell line, but it remains an intriguing question for which the answer is likely to reveal novel aspects of centriole biogenesis or maintenance. An attractive hypothesis is that the initial haploid state of these cells that could affect centriole homeostasis [56] (Hypothesis 2). We cannot preclude, however, the effect of genotoxic stress (Hypothesis 1) or the possible influence of Wolbachia (Hypothesis 3). However, one thing is striking: after reintroduction of wild-type mh expression, returning to the diploid karyotype, or eliminating Wolbachia, the 1182-4 cells do not recover centrioles.
We can speculate that the 1182-4 cell line has lost the capability for de novo centriole assembly. Normally, centriole duplication is tightly regulated and restricted to one duplication event per cell cycle [7,63]. However, when centrioles are depleted completely, either by antibody inhibition, laser or surgical ablation, genetic tricks such as the temporal depletion of SAK/Plk4, or the drug inhibition of Plk4, centrioles will assemble de novo [51,64,65,66,67,68]. This untemplated form of centriole biogenesis is slower and results in a range of centriole numbers that then proceed to replicate in the normal templated fashion. Many cell lines are poor at maintaining normal centriole numbers, and perhaps the 1182-4 cell line fails to replace them de novo when they are lost.
We are not offering an exhaustive set of hypotheses for why centrioles are lost in the 1182-4 cell line, but as we proceed to investigate this phenomenon further, we can explore two general categories of explanations. Either the centriole assembly pathway is blocked by an unknown mechanism, or an unidentified centriole maintenance pathway is inactive (or a destruction pathway is constitutively active). Related to the first category, it is possible that something has been impaired that is specifically required for the de novo pathway of centriole assembly, a process that remains very poorly understood. In this scenario, mh1 mutant cells lose their centrioles so infrequently in vivo that that loss of de novo centriole assembly does not manifest itself, whereas the relatively high rate of centriole loss in cell culture shows this deficiency in the 1182-4 mutant cell line. If this hypothesis holds true, future work on the 1182-4 cell line could reveal important new insights into the de novo pathway of centriole biogenesis.

A.D., B.L., C.Z. and T.L.M. wrote the paper. C.Z. performed experiments described in the text, and C.Z. and X.L. analyzed sequence data. All authors have read and agreed to the published version of the manuscript.

T. Megraw and C. Zheng were supported by a National Institutes of Health grant (R15HD099648).

We thank Nathaniel Henneman for helpful comments and editing. We are grateful to Mathieu Molet and the ESEAE team for hosting A. Debec as an emeritus researcher at iEES-Paris. 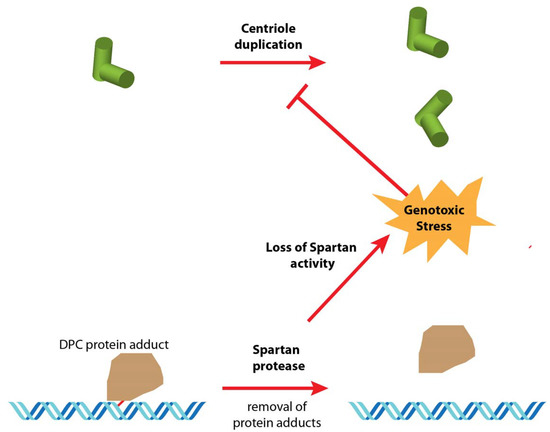 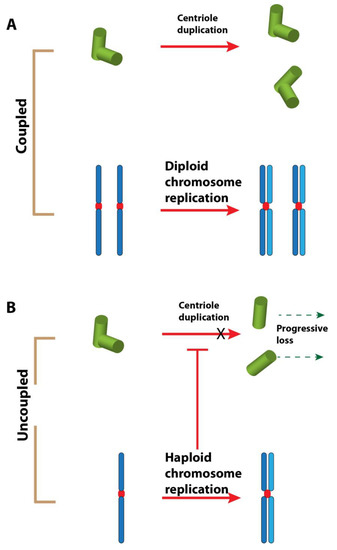 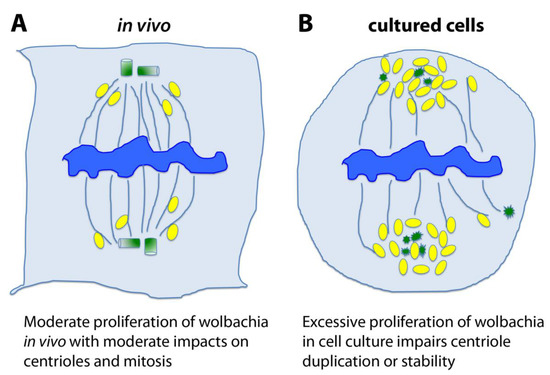