Axonal Transport as an In Vivo Biomarker for Retinal Neuropathy

Tumor-associated macrophages (TAMs) constitute the main population of immune cells present in the ovarian tumor microenvironment. These cells are characterized by high plasticity and can be easily polarized by colony-stimulating factor-1, which is released by tumor cells, into an immunosuppressive M2-like phenotype. These cells are strongly implicated in both the progression and chemoresistance of ovarian cancer. The main pro-tumoral function of M2-like TAMs is the secretion of a variety of cytokines, chemokines, enzymes and exosomes that reach microRNAs, directly inducing the invasion potential and chemoresistance of ovarian cancer cells by triggering their pro-survival signaling pathways. The M2-like TAMs are also important players in the metastasis of ovarian cancer cells in the peritoneum through their assistance in spheroid formation and attachment of cancer cells to the metastatic area—the omentum. Moreover, TAMs interplay with other immune cells, such as lymphocytes, natural killer cells, and dendritic cells, to inhibit their responsiveness, resulting in the development of immunosuppression. The detrimental character of the M2-like type of TAMs in ovarian tumors has been confirmed by a number of studies, demonstrating the positive correlation between their high level in tumors and low overall survival of patients. View Full-Text
Keywords: ovarian cancer; tumor-associated macrophages; cytokines; chemoresistance ovarian cancer; tumor-associated macrophages; cytokines; chemoresistance
►▼ Show Figures 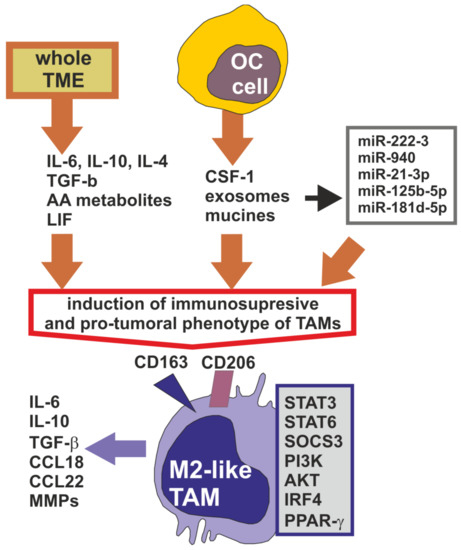 Nowak, M.; Klink, M. The Role of Tumor-Associated Macrophages in the Progression and Chemoresistance of Ovarian Cancer. Cells 2020, 9, 1299.


Nowak M, Klink M. The Role of Tumor-Associated Macrophages in the Progression and Chemoresistance of Ovarian Cancer. Cells. 2020; 9(5):1299.


Nowak, Marek; Klink, Magdalena. 2020. "The Role of Tumor-Associated Macrophages in the Progression and Chemoresistance of Ovarian Cancer." Cells 9, no. 5: 1299.