Chronic myeloid leukemia (CML) is a type of myeloproliferative neoplasm characterized by generating Bcr-Abl fusion oncogene, which constitutively translates into an active tyrosine kinase and leads to a massive influx of immature myeloid cells into the circulation [1,2]. Small molecule tyrosine kinase inhibitors (TKIs), such as imatinib, nilotinib, dasatinib, and bosutinib, are used as frontline therapy [3]. However, a substantial proportion of patients generated resistance or intolerance to these drugs and led to the development of second- and third-generation TKIs [4,5]. A variety of adverse effects, such as cardiovascular and metabolic toxicities, are associated with TKIs; thus, it renders the need to pursue novel therapeutic strategies [6].
Differentiation therapy is to induce the differentiation of blast cells toward a mature type and to inhibit tumor cell proliferation. This approach may devoid general cytotoxic effects, especially for the treatment of leukemia patients who cannot tolerate intensive chemotherapy or bone marrow transplantation [7]. The best example is the induction therapy of acute promyelocytic leukemia (APL) with retinoic acid (RA) and arsenic trioxide [8].
Megakaryocytes are originally derived from hematopoietic stem cells through a well-defined stepwise differentiation [9]. The bipotent erythroid/megakaryocytic progenitors can directly give rise to erythroid or megakaryocyte progenitors, which further develop into erythrocytes and megakaryocytes, respectively [10]. Megakaryocytic differentiation is an orchestrated signaling cascade that pushes cells toward cellular enlargement and polyploidization, expression of cell type-specific markers, including CD61, CD41, CD42, and other changes [11]. However, only a few transcription factors have been reported to be involved in this process, such as EGR1, GATA-1, and RUNX1 [12,13]. Previous studies of phorbol 12-myristate 13-acetate (PMA) have led to a greater understanding of the regulatory networks that participate in megakaryocytic differentiation. The pluripotent CML K562 cell line is frequently employed as a classic model to study megakaryocytic differentiation. PMA induces megakaryocytic differentiation of K562 cells by modulating protein kinase C (PKC) and the extracellular signal-regulated kinase/mitogen-activated protein kinase (ERK/MAPK) pathway, which promotes cell growth arrest, changes in cell morphology, formation of multi-lobulated nuclei, and increased expression of various genes associated with megakaryocytic differentiation [14,15].
Nobiletin (5,6,7,8,3′,4′-hexamethoxyflavone, NOB), a polymethoxyflavone (PMF), is present abundantly in the peels of certain citrus, such as sweet and mandarin oranges [16]. NOB has been demonstrated to possess a broad spectrum of bioactivities, including anti-inflammatory, anti-atherogenic, neuroprotective, and anti-tumor properties [17,18,19,20]. Moreover, the NOB shows inhibition of cell proliferation and invasion, arrest of cell cycle progression or induction of cell apoptosis in various types of solid tumors [21,22,23]. In hematological malignancies, NOB was shown to suppress cell growth and induce caspase-dependent apoptosis in human acute myeloid leukemia (AML) HL-60 cells [24]. NOB has also been identified as a modulator of cell differentiation in HL-60 cells [25]. Our previous studies showed NOB induced cell differentiation and exerted anti-leukemic effects through downregulation of the c-KIT gene in AML THP-1, U-937 and HL-60 cells [26]; however, the anti-leukemic effects of NOB in CML cells remain unclear.
In this study, we investigated whether NOB exhibits anti-cancer activities in human CML K562 cells. We evaluated the anti-leukemic effects of NOB and how it affects cancer cell proliferation, apoptosis and differentiation. We found that NOB exerted its anti-leukemic activities by inhibiting cell growth, modulating cell cycle progression and inducing K562 cells toward megakaryocyte differentiation. Moreover, we found that MAPK/ERK signaling pathway-dependent EGR1 gene expression might play a pivotal role in NOB-mediated megakaryocyte differentiation. Finally, we demonstrated a synergistic effect of the combined treatment of NOB and imatinib to reduce the viability of K562 cells. Our study provided a potential strategy by which NOB might have a crucial impact on cancer cell differentiation as a therapeutic approach in CML.

Cells were treated with vehicle (0.1% DMSO) or NOB (10–100 μM) for 24 h or 48 h followed by incubation with MTT reagent (1 mg/mL) for 3 h at 37 °C. The cell pellets were collected and dissolved in DMSO. Cell viability was measured as the absorbance at 550 nm and according to the reduction of MTT to purple formazan crystals by mitochondria. For measurement of cell growth, cells were stained by trypan blue dye and the cell numbers were analyzed by counting of viable cells under microscopy.

Cell cycle distribution was determined by flow cytometry analysis as previously described [27]. Cells were seeded on a 6-well plate and treated with vehicle or NOB for 48 h. Cells were collected and washed twice in ice-cold phosphate-buffered saline (PBS), fixed in 70% ethanol in PBS and stored at −20 °C for more than 24 h. Cells were washed in ice-cold PBS and incubated with propidium iodide (PI) staining buffer (20 μg/mL PI, 200 μg/mL RNaseA and 0.1% Triton X-100 in PBS) at room temperature for 30 min. Cell cycle distribution was measured using the FACSCalibur and analyzed by Cell Quest Pro software (BD Biosciences, San Jose, CA, USA).
The population of apoptotic cells was analyzed using an AnnexinV-FITC Apoptosis Detection Kit (Strong Biotech, Taipei, Taiwan), according to the manufacturer’s instructions. Cells were washed in ice-cold PBS, resuspended in buffer containing AnnexinV-FITC and PI, and incubated at room temperature for 15 min. The apoptotic cells were analyzed by flow cytometric analysis.
To analyze the expression of cell surface markers (CD41a, CD42a, CD42b, CD61, glycophorin A and CD71), cells were treated with vehicle or NOB (80 μM) for 48 h and incubated with a standardized panel of human specific antibody reagents to characterize populations of myeloid/megakaryocyte lineage cells as previously described [28]. Up to 50,000 cells per sample were detected by flow cytometric analysis. The levels of cell surface marker proteins were analyzed by Cell Quest Pro software and the signals from dead cells and doublets were excluded. The amounts of CD41a, CD42a, CD42b, CD61, glycophorin A, and CD71 on cell surface were expressed as the geometric mean fluorescence intensity (MFI).

Cells were incubated with vehicle or NOB (80 μM) for 2, 4, 6, and 8 days. Cytospins (25,000 cells) were obtained by centrifugation at 200 r.p.m. using CytospinTM 4 Cytocentrifuge (Thermo Fisher Scientific) and stained with Wright–Giemsa dye (Sigma). The cell morphology and lobulation of the nucleus were analyzed under microscopy. At least 200 cells in randomly separated fields were counted and the cells with multi-lobulated nuclei were scored and expressed as a percentage of the total cell number in these fields.

Cells were treated with vehicle or NOB (80 μM) for 48 h. Total RNA was prepared using TRIzol reagent (Thermo Fisher Scientific), according to the manufacturer’s instructions. Microarray analysis was performed as previously described [26]. Briefly, Cy5-labeled aRNA was prepared for microarray hybridization to the Human One Array Plus Version 7.1 (HOA 7.1, Phalanx Biotech Group, Hsinchu, Taiwan). The fluorescence intensities of each spot were analyzed using GenePix 4.1 software (Molecular Devices, Sunnyvale, CA, USA). The normalized spot intensities were transformed to the log2(ratio) of gene expression, and the differentially expressed genes were established at a log2(ratio) ≥1.0 or ≤−1.0 and p value < 0.05 for further analysis.

K562 cells were transfected with the siRNA negative control (si-NC) or human-specific EGR1 siRNA (Egr-1 siRNA(h):sc-29303) (Santa Cruz Biotechnology) at a final concentration of 250 pmol/mL using LipofectamineTM 2000 transfection reagent (Thermo Fisher Scientific) according to the manufacturer’s instructions. After 24 h of transfection, the cells were treated with vehicle or NOB (80 μM) for 48 h, after which cells were harvested for further analysis.

Cells were treated with NOB (80 μM) for the indicated periods. The cellular proteins were lysed in RIPA buffer, and protein kinase C (PKC) activity was determined using nonradioactive PKC activity assay kits (Enzo Life Sciences, Ann Arbor, MI, USA), according to the manufacturer’s instructions and as previously described [29]. The kinase activity was measured as the absorbance at 450 nm in a microplate reader.

3.2. Effects of NOB on Cell Cycle Distribution and Apoptosis of K562 Cells

We next examined whether NOB could modulate the cell cycle progression. As shown in Figure 2a,b, NOB induced a significant increase in the G1 phase cell population, which was accompanied by a decrease in cells distributed in S phases. NOB did not cause a significant change in the sub-G1 phase (population of cell death). We further examined the effect of NOB on cell apoptosis in K562 cells. As shown in Figure 2c,d, the percentage of early or late apoptotic cells was not significantly altered in NOB-treated cells as compared to the vehicle-treated group. To investigate whether NOB could modulate the cell cycle regulators for controlling the G1/S phase transition, the protein levels of p21, p27, cyclin D2, cyclin E1, and CDK6 were analyzed. As shown in Figure 2e,f, the protein levels of p21 and p27 were markedly increased, while cyclin D2 was decreased in NOB-treated K562 cells. The levels of CDK6 and cyclin E1 were not significantly changed by NOB. These results suggested that NOB suppressed cell growth through cell cycle arrest in G1 phase but did not cause significant cell death in K562 cells.

3.4. The EGR1 Expression Induced by NOB Could Promote Megakaryocytic Differentiation of K562 Cells

3.5. NOB Enhances EGR1 Expression Through Activation of the MAPK/ERK Pathway

The MAPK/ERK and protein kinase C (PKC) pathways were reported to be involved in the differentiation of leukemia cells [34,35]. Thus, we further investigated whether NOB-induced megakaryocytic differentiation was dependent on activation of the PKC and MAPK/ERK pathways in K562 cells. Cells were pretreated with the PKC inhibitor bisindolylmaleimide I (BIM) or the MAPK/ERK kinase 1/2 (MEK1/2) inhibitor U0126 for 30 min followed by treatment with NOB (80 μM) for 48 h. As shown in Figure 7a, treatment of cells with BIM or U0126 alone did not significantly affect the NOB-induced CD61 mRNA expression. When K562 cells were cotreated with NOB and one inhibitor, the NOB-induced CD61 expression was significantly attenuated by BIM or U0126. The treatment of cells with the inhibitors SB203580 (p38 inhibitor), SP600125 (c-jun N-terminal kinase (JNK) inhibitor), or LY294002 (PI3K/Akt inhibitor) did not affect the NOB-induced upregulation of CD61 mRNA (Figure S3). Furthermore, we investigated the effects of NOB on the activation of PKC and the phosphorylation of ERK in K562 cells. As shown in Figure 7b, PKC activity was increased 2-fold after NOB (80 μM) treatment for 120 min compared with untreated control group. NOB treatment increased the phosphorylation of ERK1/2 protein from 0.5 h after treatment and lasted up to 24 h in K562 cells (Figure 7c,d). These results suggested that the PKC and MAPK/ERK pathways were activated in the NOB-mediated megakaryocytic differentiation of K562 cells.
We further investigated whether EGR1 expression induced by NOB was dependent on the PKC or MAPK/ERK pathways. As shown in Figure 7e, treatment of cells with BIM or U0126 alone did not affect the mRNA expression of EGR1. When K562 cells were treated with NOB in combination with U0126, but not with BIM, the NOB-induced EGR1 mRNA expression was markedly inhibited. Similarly, the EGR1 protein levels were reduced in cells that were treated with both NOB and U0126 compared with the levels in cells treated with NOB alone (Figure 7f). These data indicated that NOB promoted EGR1 gene expression through a MAPK/ERK-dependent pathway. These above results reveal that activation of the ERK-dependent EGR1 expression plays an essential role in the response to NOB-mediated CD61 marker protein expression of megakaryocyte.

3.6. Effects of Combined Treatment of Imatinib and NOB in K562 Cells

In this study, we demonstrated that NOB exerted anti-leukemic effects and promoted megakaryocytic differentiation via activation of the MAPK/ERK signaling pathway to up-regulate EGR1 gene in K562 cells. The combined treatment of NOB and imatinib exerted a notably synergistic effect and an enhanced cytotoxicity of cancer cells. Our current findings improve understanding the molecular basis of anti-leukemic activity by NOB, and provide a valuable therapeutic strategy in CML combination therapy. 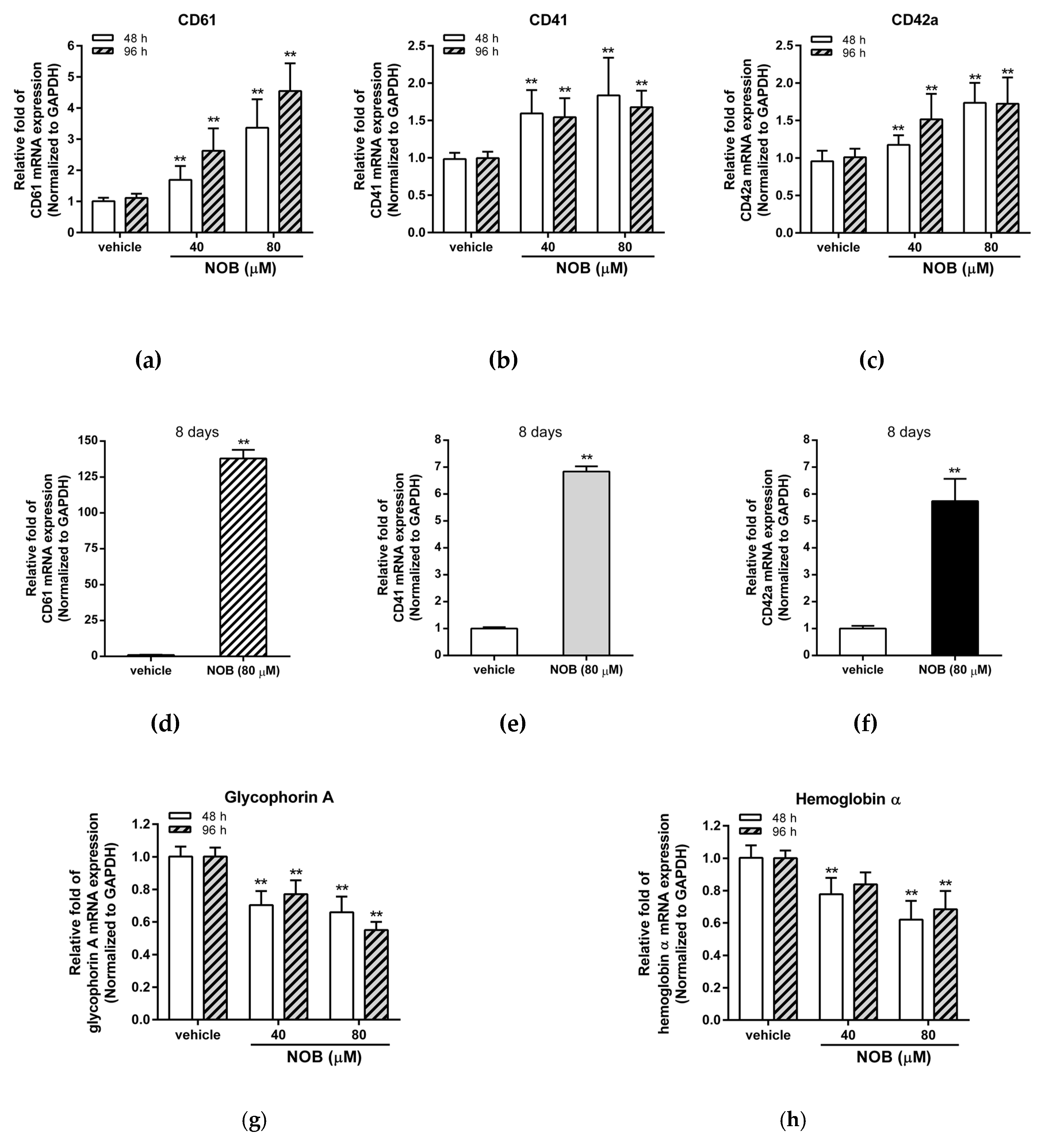 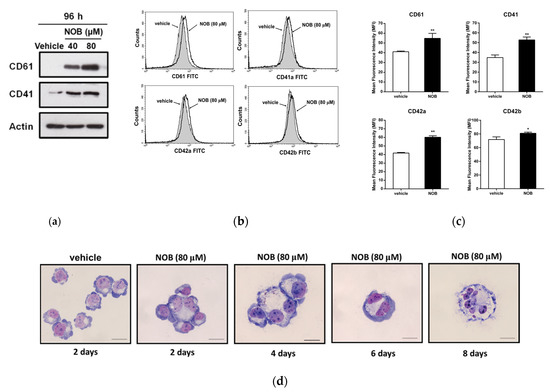 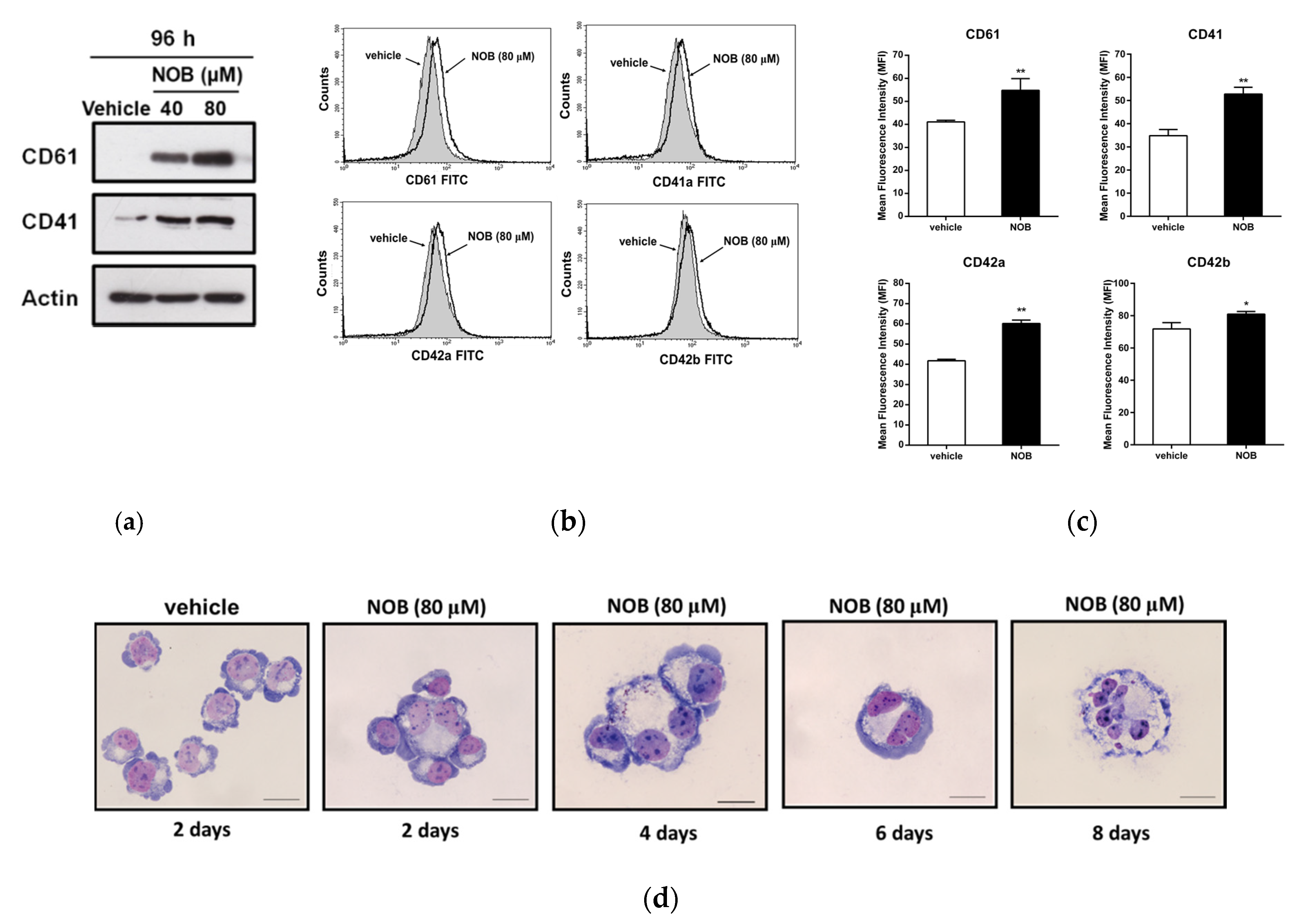 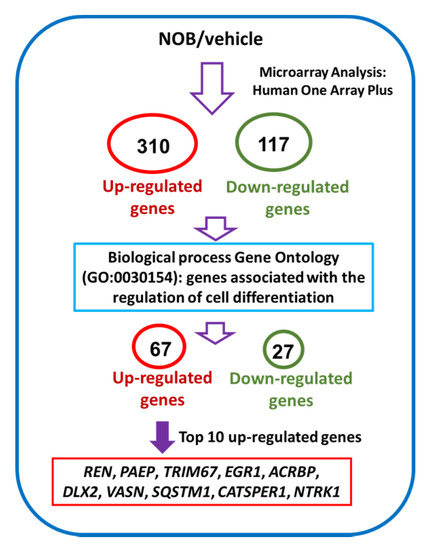 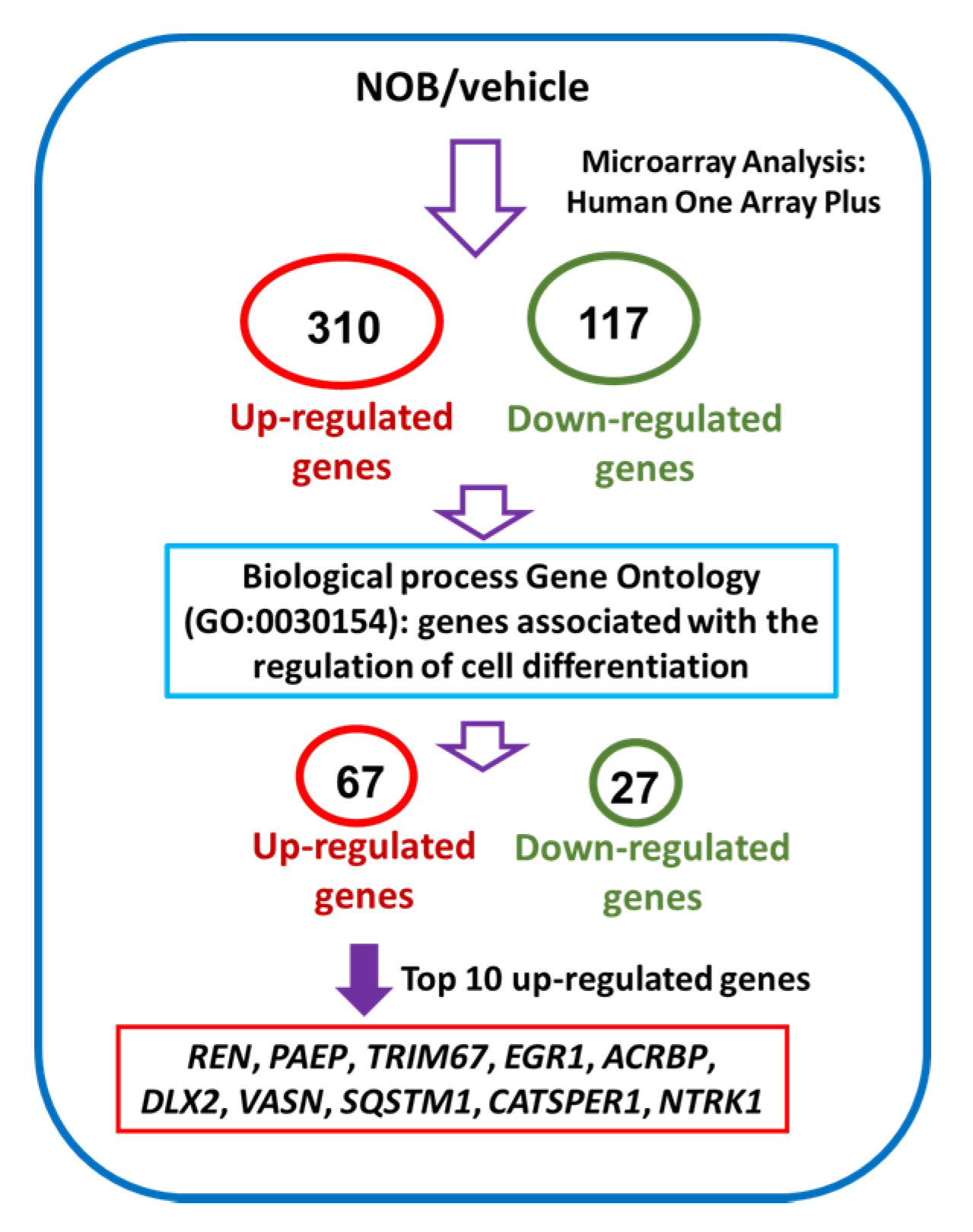 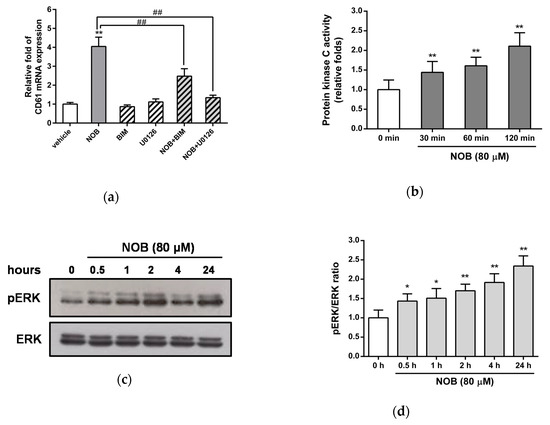 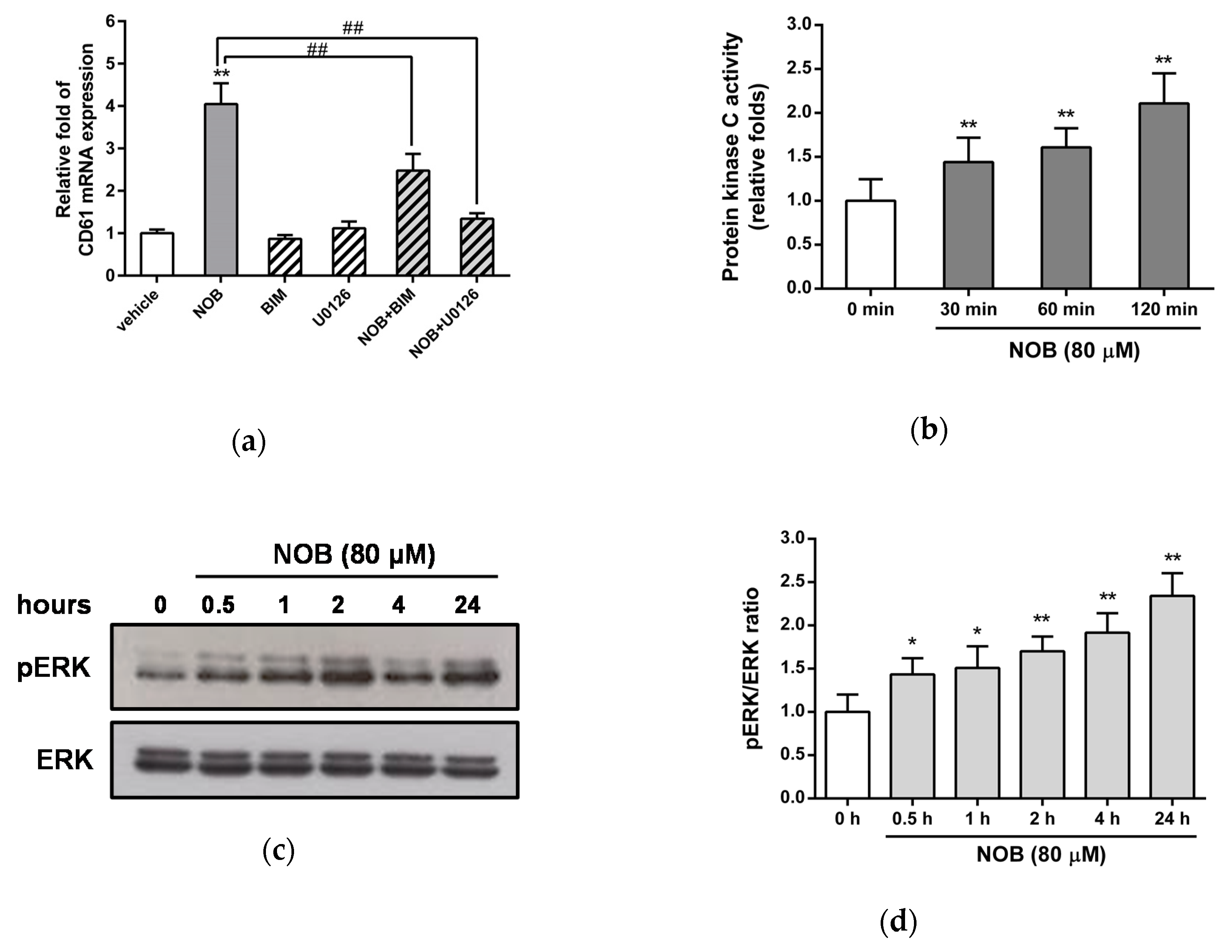