GSK3: A Kinase Balancing Promotion and Resolution of Inflammation
Previous Article in Journal

A Unique GSK-3β inhibitor B10 Has a Direct Effect on Aβ, Targets Tau and Metal Dyshomeostasis, and Promotes Neuronal Neurite Outgrowth

Glycogen synthase kinase 3β (GSK3β), originally described as a negative regulator of glycogen synthesis, is a molecular hub linking numerous signaling pathways in a cell. Specific GSK3β inhibitors have anti-depressant effects and reduce depressive-like behavior in animal models of depression. Therefore, GSK3β is suggested to be engaged in the pathogenesis of major depressive disorder, and to be a target and/or modifier of anti-depressants’ action. In this review, we discuss abnormalities in the activity of GSK3β and its upstream regulators in different brain regions during depressive episodes. Additionally, putative role(s) of GSK3β in the pathogenesis of depression and the influence of anti-depressants on GSK3β activity are discussed. View Full-Text
Keywords: GSK3β; MDD; depression; anti-depressants; AKT; BDNF; neuroprotection GSK3β; MDD; depression; anti-depressants; AKT; BDNF; neuroprotection
►▼ Show Figures 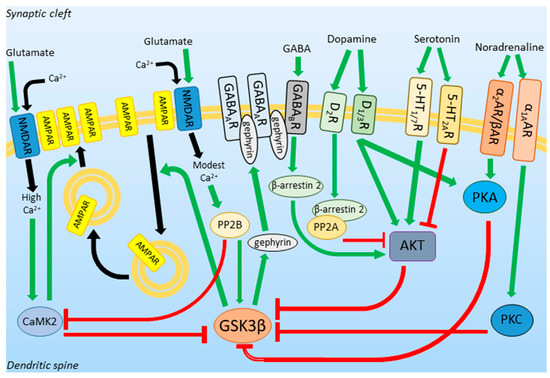