Inhibitors of apoptosis (IAPs) are a family of proteins that regulate cell death and inflammation. XIAP (X-linked IAP) is the only family member that suppresses apoptosis by directly binding to and inhibiting caspases. On the other hand, cIAPs suppress the activation of the extrinsic apoptotic pathway by preventing the formation of pro-apoptotic signaling complexes. IAPs are negatively regulated by IAP-antagonist proteins such as Smac/Diablo and ARTS. ARTS can promote apoptosis by binding and degrading XIAP via the ubiquitin proteasome-system (UPS). Smac can induce the degradation of cIAPs but not XIAP. Many types of cancer overexpress IAPs, thus enabling tumor cells to evade apoptosis. Therefore, IAPs, and in particular XIAP, have become attractive targets for cancer therapy. In this review, we describe the differences in the mechanisms of action between Smac and ARTS, and we summarize efforts to develop cancer therapies based on mimicking Smac and ARTS. Several Smac-mimetic small molecules are currently under evaluation in clinical trials. Initial efforts to develop ARTS-mimetics resulted in a novel class of compounds, which bind and degrade XIAP but not cIAPs. Smac-mimetics can target tumors with high levels of cIAPs, whereas ARTS-mimetics are expected to be effective for cancers with high levels of XIAP.
Keywords: XIAP; cIAPs; ARTS; Smac; IAP antagonist; small molecules; apoptosis; cancer therapy XIAP; cIAPs; ARTS; Smac; IAP antagonist; small molecules; apoptosis; cancer therapy

Apoptosis is a form of programmed cell death that is critical for normal development and tissue homeostasis. Abnormal regulation of this process is associated with a wide variety of human diseases, including immunological and developmental disorders, neurodegeneration, and cancer [1,2,3]. Apoptosis can be initiated by both extrinsic and intrinsic signals mostly centered in and from the mitochondria [4,5]. The extrinsic apoptotic pathway is activated when apoptotic inducing ligands such as Fas ligand (FasL) and tumor necrosis factor alpha (TNFα) engage with their receptors, such as FAS receptor (CD95) and TNF receptor (TNFR), respectively [6]. The intrinsic pathway is induced by internal apoptotic signals (such as DNA damage) but can also be activated following extrinsic stimuli to enhance the death receptor apoptotic signals [7,8]. Both pathways are executed by activating caspases (cysteine–aspartic proteases) through cleavage from their inactive zymogens [9,10,11]. Apoptotic caspases are organized into “initiator caspases” (caspase-2, -8, -9, and -10) and effector caspases (caspase-3, -7, and -6) [11,12,13,14]. Caspases 8 and 10 are cleaved primarily in response to extrinsic signals, while caspase-9 is activated in the intrinsic mitochondrial pathway. These enzymes act in a cascade that culminates in cleavage of multiple cellular proteins, resulting in disassembly of the content of cells [10]. In living cells, caspases are kept in check by inhibitors of apoptosis (IAP) proteins [15,16]. There are eight human IAPs, namely X-linked-IAP (XIAP), cIAP1, cIAP2, ML-IAP, NAIP, ILP2, survivin, and Bruce. IAPs contain between one to three baculoviral IAP repeats (BIR), which serve as protein–protein interaction domains [9,10,17]. In addition, XIAP, cIAP1, cIAP2, ML-IAP, and ILP2 have an ubiquitin-associated (UBA) domain, which enables the binding of poly-ubiquitin conjugates, and a RING domain responsible for E3-ligase activity [18,19,20,21]. The best-studied IAP is XIAP, which has three BIR domains. Its BIR3 domain binds directly to and inhibits caspase-9, while the linker region between the BIR1 and BIR2 domains is responsible for the inhibition of caspase-3 and 7 [22,23,24]. XIAP is the most potent member of the IAP gene family in terms of its ability to directly inhibit caspases and suppress apoptosis [25]. Unlike XIAP, its two paralogs, cIAP1 and cIAP2, are not able to directly repress caspases [15,17]. cIAPs can interact with TNF-associated factors (TRAFs) to prevent the formation of pro-apoptotic signaling complexes in the extrinsic apoptotic pathways initiated by TNFR [26,27,28,29]. cIAPs affect cell survival through both canonical and non-canonical NF-κB signaling [28,30,31,32,33,34,35]. The canonical NF-κB pathway involves the assembly of a signaling complex comprised of TRADD, TRAF2, RIPK1, and cIAPs. cIAPs induce a non-degradative ubiquitylation of RIPK1 as well as auto-ubiquitylation [26,27,28,29]. This leads to activation of downstream pro-survival NF-κB signaling. Alternatively, survival is maintained through the inhibition of the non-canonical pathway by cIAPs promoting proteasomal degradation of NIK (NF-κB-inducing kinase) [26,27,28,29,30,31,32,33,34,35]. Notably, inactivation of individual cIAP genes yields viable mice and causes no obvious defects in NF-κB signaling and TNFα induced cell death, presumably due to redundant function [36,37]. Consistent with this idea, cIAP1/2 DKO mice die as embryos and have a reduced response to TNFα that has been attributed to a defect in the amplification loop of the TNFR pathway [38]. In contrast, although originally XIAP deficient mice were reported to have no obvious phenotype, a later publication found that XIAPΔRING mutant mice develop lymphomas and lymphoblastic leukemia [19,39]. In addition, inactivation of XIAP sensitizes certain types of stem cells for apoptosis, including hair follicle stem cells of the skin and intestinal stem cells, and this is associated with decreased wound healing [40,41]. Moreover, using gene-targeted mice, the loss of XIAP or deletion of its RING domain lead to excessive cell death [42].

R.A. and S.L. both discussed the content and wrote this review. All authors have read and agreed to the published version of the manuscript.

This work was supported by U.S. Israel Binational Science Foundation Grant 2003085, Israel Science Foundation (ISF) Grants 1264/06 and 822/12, INCPM-ISF Grant 2376/15, by the Charles Wolfson Charitable Trust, and by a generous grant award from the Hymen Milgrom Trust.

We thank Hermann Steller for thoughtful discussion of the manuscript. We thank Fabrice Eli Benchetrit for excellent research work contributing to this paper.

Both authors declare no conflict of interest. 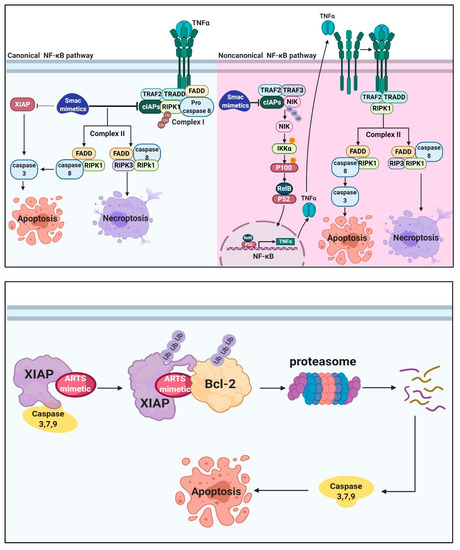