Protein import across the endoplasmic reticulum membrane is physiologically regulated in a substrate-selective manner to ensure the protection of stressed ER from the overload of misfolded proteins. However, it is poorly understood how different types of substrates are accurately distinguished and disqualified during translocational regulation. In this study, we found poorly assembled translocon-associated protein (TRAP) complexes in stressed ER. Immunoaffinity purification identified calnexin in the TRAP complex in which poor assembly inhibited membrane insertion of the prion protein (PrP) in a transmembrane sequence-selective manner, through translocational regulation. This reaction was induced selectively by redox perturbation, rather than calcium depletion, in the ER. The liberation of ERp57 from calnexin appeared to be the reason for the redox sensitivity. Stress-independent disruption of the TRAP complex prevented a pathogenic transmembrane form of PrP (ctmPrP) from accumulating in the ER. This study uncovered a previously unappreciated role for calnexin in assisting the redox-sensitive function of the TRAP complex and provided insights into the ER stress-induced reassembly of translocon auxiliary components as a key mechanism by which protein translocation acquires substrate selectivity. View Full-Text
Keywords: protein translocation; protein quality control; prion protein; ER stress; redox homeostasis protein translocation; protein quality control; prion protein; ER stress; redox homeostasis
►▼ Show Figures 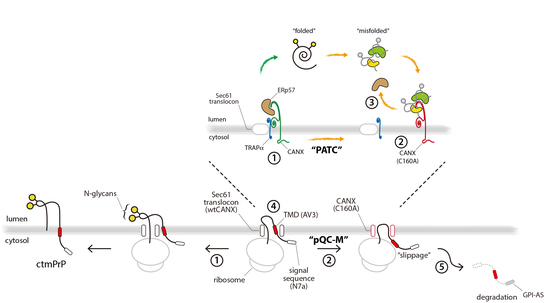