Peroxisome proliferator-activated receptor γ (PPARγ) is a master regulator of adipose tissue biology. In obesity, phosphorylation of PPARγ at Ser273 (pSer273) by cyclin-dependent kinase 5 (CDK5)/extracellular signal-regulated kinase (ERK) orchestrates diabetic gene reprogramming via dysregulation of specific gene expression. Although many recent studies have focused on the development of non-classical agonist drugs that inhibit the phosphorylation of PPARγ at Ser273, the molecular mechanism of PPARγ dephosphorylation at Ser273 is not well characterized. Here, we report that protein phosphatase Mg2+/Mn2+-dependent 1A (PPM1A) is a novel PPARγ phosphatase that directly dephosphorylates Ser273 and restores diabetic gene expression which is dysregulated by pSer273. The expression of PPM1A significantly decreases in two models of insulin resistance: diet-induced obese (DIO) mice and db/db mice, in which it negatively correlates with pSer273. Transcriptomic analysis using microarray and genotype-tissue expression (GTEx) data in humans shows positive correlations between PPM1A and most of the genes that are dysregulated by pSer273. These findings suggest that PPM1A dephosphorylates PPARγ at Ser273 and represents a potential target for the treatment of obesity-linked metabolic disorders. View Full-Text
Keywords: obesity; insulin sensitivity; PPM1A; PPARγ S273 phosphorylation; diabetic gene reprogramming obesity; insulin sensitivity; PPM1A; PPARγ S273 phosphorylation; diabetic gene reprogramming
►▼ Show Figures 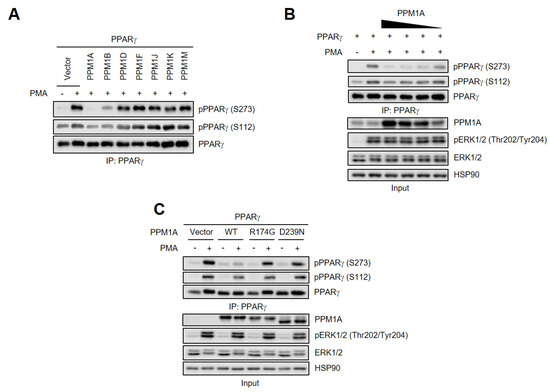