Renal cell carcinoma (RCC) is the most lethal genitourinary cancer in patients with advanced or metastatic RCC, leading to a poor prognosis [1]. In the absence of distant metastasis, nephrectomy can be used for RCC treatment; however, if metastasis is present, immunotherapeutic agents in addition to nephrectomy are needed to increase the median survival time [2]. Although recently developed targeted therapies with tyrosine kinase and mTOR inhibitors are beneficial for overcoming the resistance of RCC to chemotherapy, radiotherapy, and hormone therapy, the prognosis remains poor for advanced or metastatic RCC [3,4].
Evidence indicates that natural food and herbal medicine may play promising roles in RCC treatment [5,6]. Fisetin (3,3′,4′,7-tetrahydroxyfavone), a naturally occurring flavonoid commonly found in plants, is effective against cancer, and its possible mechanisms include inhibition of proliferation, angiogenesis, induction of cell cycle arrest, and reversal of multidrug resistance [7]. Fisetin has therapeutic effects against hepatoma, lung adenocarcinoma, non-small-cell lung cancer, and prostate cancer through the induction of apoptosis or the inhibition of invasion or migration [8,9,10,11]. Through the modulation of the caspase-dependent pathway and the interruption of the p38 mitogen-activated protein kinase (MAPK)-dependent pathway, we found that fisetin can induce apoptosis and inhibit the migration and invasion of human cervical cancer cells [12,13].
Cysteine cathepsin proteases, including 11 members which were originally known as degradative enzymes of the lysosome, are frequently dysregulated in malignant transformation and induce tumor progression or proliferation, degradation of the extracellular matrix (ECM), invasion, and metastasis in numerous cancers through various mechanisms [14,15]. The upregulation of cathepsin B (CTSB), cathepsin S (CTSS), and cathepsin V (CTSV) is correlated with tumor progression and poor prognosis and is a potential predictor of response to chemotherapy [16,17,18]. A disintegrin and metalloproteinase (ADAM), a member of the metzincin superfamily of matrix metalloproteinases (MMPs), is involved in numerous biological functions, including the adhesion, migration, proteolysis, and malignant transformation of various cancers [19,20,21]. The upregulation of specific ADAMs in advanced and malignant human cancers indicates its modulating role in the progression of cancer, such as the promotion of prostate intraepithelial neoplasia or colon cancer invasion [20,22].
Despite encouraging reports regarding the efficacy of new RCC therapies [3,4], the overall survival time for patients with advanced or metastatic RCC remains short. In this study, using the human protease array, we attempted to demonstrate the correlation between RCC and cathepsins and ADAMs, as well as the inhibitory effects of fisetin for CTSB, CTSS, and ADAM9. Fisetin is effective against cancer without causing the side effects induced by traditional therapeutic agents. Furthermore, no study has evaluated the effects of fisetin on RCC. Therefore, we conducted this study to clarify the effect of fisetin on RCC and to investigate the mechanism through which fisetin acts on highly invasive human RCC cells.

The human RCC cell line 786-O was cultured in RPMI medium; CaKi-1, ACHN, and A-498 were routinely cultured in MEM medium. Each growth medium was supplemented with 10% fetal bovine serum and contained 100 U/mL penicillin, 0.1 mM NEAA, and 1 mM sodium pyruvate. The cultures were incubated at 37 °C in a humidified atmosphere of 5% CO2.

The effect of fisetin on cytotoxicity was determined using the MTT assay. RCC cells (1 × 104 cells/well) were seeded into a 24-well plate. The next day, they were treated with different concentrations of fisetin (20, 40, and 60 μM) for 24 h, after which the culture medium was removed and the MTT agents (0.5 mg/mL) were added. The mixture was then incubated for an additional 4 h. After incubation, the MTT agents were removed and 1 mL isopropanol was added to dissolve the purple crystal. The produced formazan was detected by measuring the absorbance at 570 nm using a microplate reader (Labsystems, Helsinki, Finland). The viability of the treated cells is presented as a percentage of vehicle-treated control cells. Three independent experiments were performed for statistical analysis.

A CCK8 kit assay (Abcam, Cambridge, MA, USA) was used to measure the cytotoxic effects of fisetin on human RCC cells. Human RCC cells (2–3 × 103/well) were seeded into 96-well plates and treated with different concentrations of fisetin (20, 40, and 60 μM) for 24 h. Subsequently, the CCK-8 reagent was added to each well and incubated at 37 °C for 2 h. The absorbance wavelength was measured at 570nm by a microplate reader (Labsystems, Helsinki, Finland).

A colony formation assay was performed to assess the dimensions and numbers of colonies. The cells were seeded (1 × 103 cells/well, depending on the cell type) into 6-well plates. After being treated with different concentrations (20, 40, and 60 μM) of fisetin for 7 days, the fisetin-containing medium was removed and the cells were washed with PBS twice. The colonies were fixed with 70% methanol and stained with 0.5% crystal violet. The images of stained colonies were captured using a Nikon photo camera.

Cells were treated with different concentrations of fisetin for 24 h, then collected and washed in cold PBS buffer. Apoptotic cells were measured using the Muse™ Annexin V and Dead Cell Kit (Part No. 4700-1485) according to the manufacturer’s instructions. Apoptotic cells were then quantified and analyzed using a Muse Cell Analyzer (Millipore, Darmstadt, Germany).

The migration assay was performed using Transwell inserts (Costar, NY, USA; 8 mm pore size) in 24-well dishes. For the invasion assay, the membrane was coated with a layer of Matrigel (BD Biosciences, Bedford, MA, USA) according to the manufacturer’s instructions. The following procedures were the same for both migration and invasion assays. After treatment with fisetin for 24 h, the cells were harvested and seeded into Transwell inserts at 1 × 104 cells/well in serum-free medium and then incubated for 24 hat 37 °C in 5% CO2. Four random fields of each membrane were chosen to be photographed and counted by an inverted phase-contrast microscope. The migrated cells number = (the number of fisetin − treated cells/the number of control cells) × 100%.

A Human Protease Array Kit (R&D Systems, Minneapolis, MN, USA) was used as previously reported [23]. 786-O and Caki-1 cells were treated with fisetin (0, 60 μM) for 24 h, then lysed in the lysis buffer (R&D Systems). The nitrocellulose membranes, including 34 different capture antibodies, were blocked and washed for 10 mins, then incubated with Streptavidin-HRP in the array buffer. The signal was visualized by an enhanced chemiluminescence analysis system (Fuji Film, Tokyo, Japan).

786-O and Caki-1 cells were treated with various doses of fisetin (0, 20, 40, and 60 μM) for 24 h. Equal amounts of protein extracts (25 μg) were separated on 10% sodium dodecyl sulphate polyacrylamide gel electrophoresis and transferred onto polyvinylidene difluoride membranes. After blocking the membranes with 5% milk, the blots were incubated with primary antibodies in TBST buffer at 4 °C overnight. Western blotting bands were detected using the Western-HRP substrate (Millipore, Billerica, MA, USA), and the bands were visualized and detected using a Luminescent Image Analyzer (LAS-4000).

GraphPad Prism 5 was used for statistical analysis. Data are represented as the mean ± SEM of three independent experiments. Differences between groups were assessed through one-way analysis of variance. A p value of <0.05 was considered statistically significant.

The fisetin structure is shown in Figure 1A. We first determined the cytotoxic effects of fisetin on RCC cell lines (786-O, A-498, Caki-1, and ACHN cells) through the MTT assay and CCK8 assay. We found that treating the RCC cells (786-O, A-498, Caki-1, and ACHN) with increasing concentrations (0, 20, 40, and 60 μM) of fisetin for 24 h significantly decreased cell viability in a dose-dependent manner (Figure 1B), similar to the results of the CCK8 assay (Figure 1C). The colony formation assay revealed that fisetin significantly reduced the colony formation of these cells in a dose-dependent manner (Figure 1D). Fisetin concentrations of 0–60 μM were used for further in vitro experiments.

To explore the mechanism involved in fisetin-induced inhibition of RCC cell proliferation, the effects of fisetin on the cell cycle arrest were examined. 786-O and ACHN cells were incubated with various concentrations (0, 20, 40, and 60 μM) of fisetin for 24 h. The G2/M phase arrest increased from 35.5% to 46.9% and 41.5% to 53.6% in 786-O and Caki-1 cells, respectively, in a dose-dependent manner (Figure 2A). Furthermore, we assessed G2/M-related proteins from 786-O and CaKi-1 cells because of their relationship with the cell cycle. These results showed that the upregulation of p21 and p27 downregulated cyclin B1 in both fisetin-treated cell types (Figure 2B). Thus, fisetin inhibits 786-O and CaKi-1 cell proliferation, as well as arrests, then cells cycle in the G2/M phase.

A crucial characteristic of metastasis is the migration and invasion of tumor cells [24]. Treating 786-O, A-498, Caki-1, and ACHN cells with various concentrations (0, 20, 40, and 60 μM) of fisetin for 24 h showed that fisetin inhibited the migration and invasion of these RCC cells in a dose-dependent manner, especially at a concentration of more than 40 μM (Figure 3).

The human protease array kit assay was used to determine the possible mechanisms involved in the fisetin-induced inhibition of the migration and invasion of RCC cells. After incubating the cells with 0 and 60 μM fisetin for 24 h, spots of CTSB, CTSS, CTSV, and ADAM9 were marked; the expression of individual proteases significantly decreased after treatment with 60 μM fisetin (Figure 4A). Furthermore, protease array, Western blot, and qRT-PCR analyses were used to examine the protein and mRNA expression of ADAM9, CTSS, and CTSB after fisetin treatment. In 786-O and Caki-1 cells, ADAM9, CTSS, and CTSB expression showed a marked dose-dependent decrease after fisetin treatment. Only CTSV protein expression remained unchanged (Figure 4B,C). These results indicate that fisetin significantly inhibits the migration and invasion of RCC cells through the suppression of CTSB, CTSS, and ADAM9. 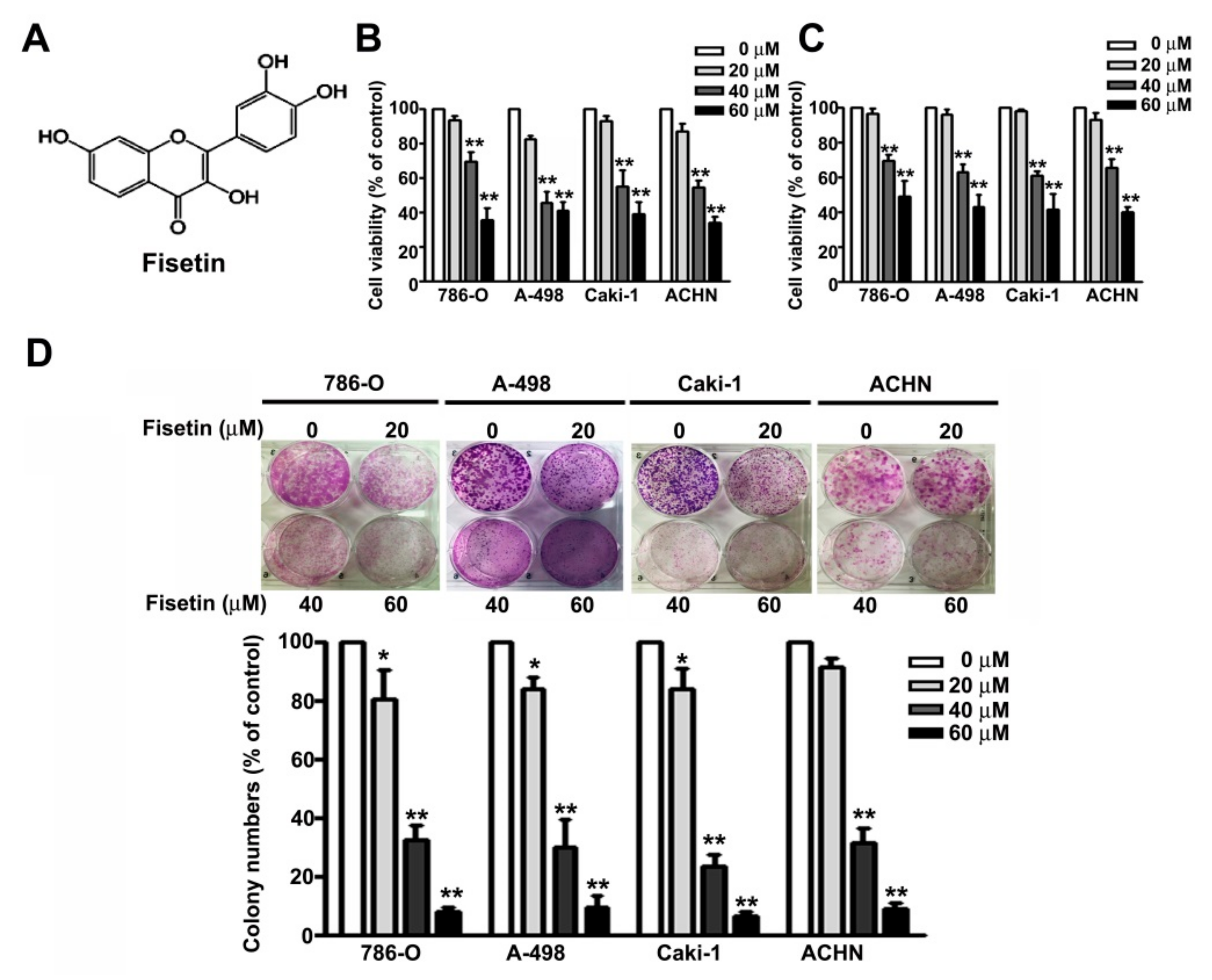 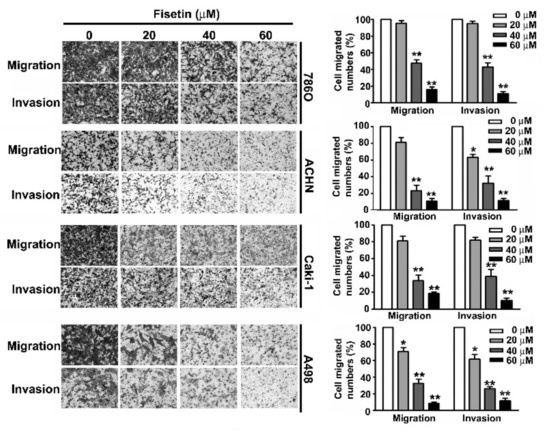 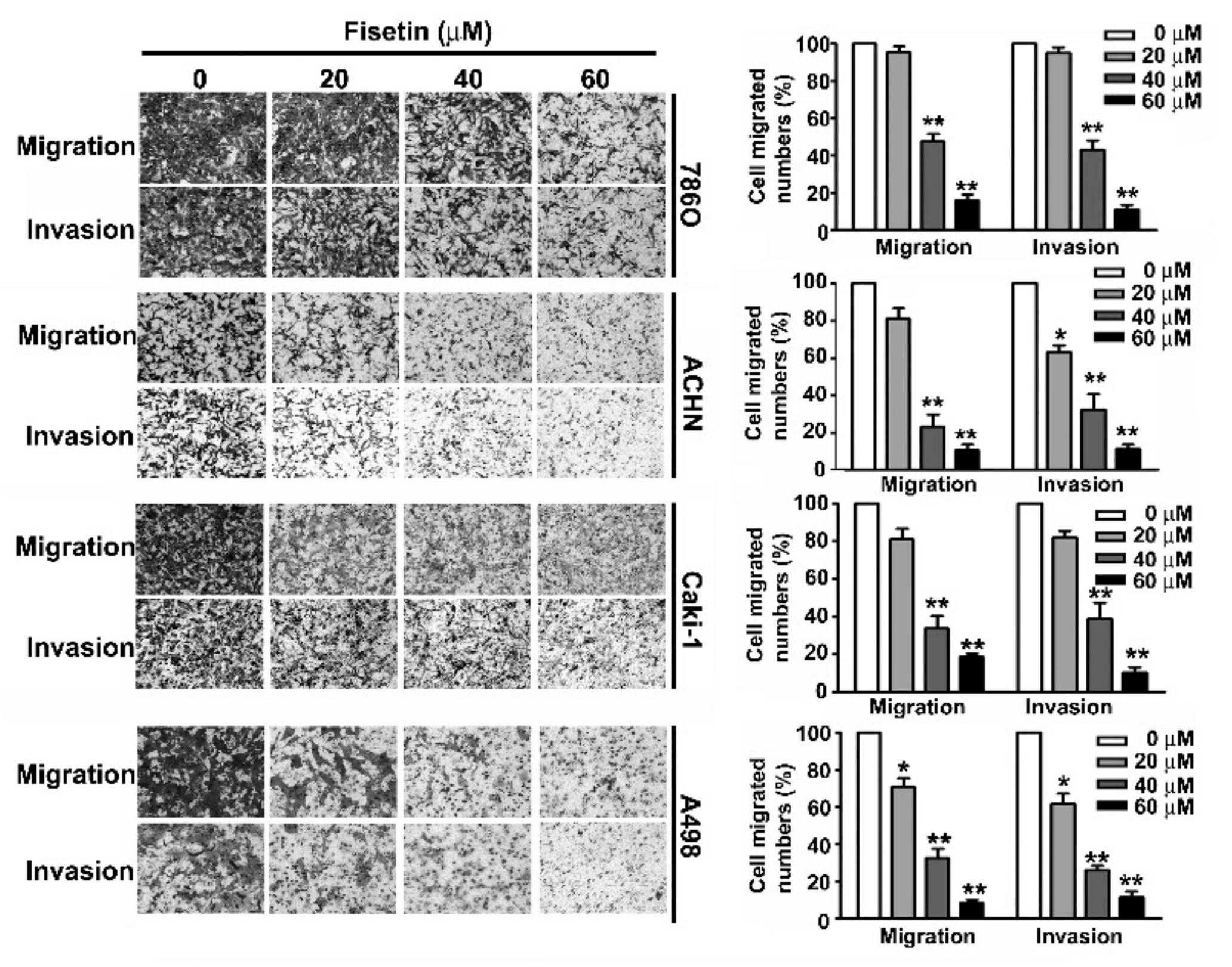 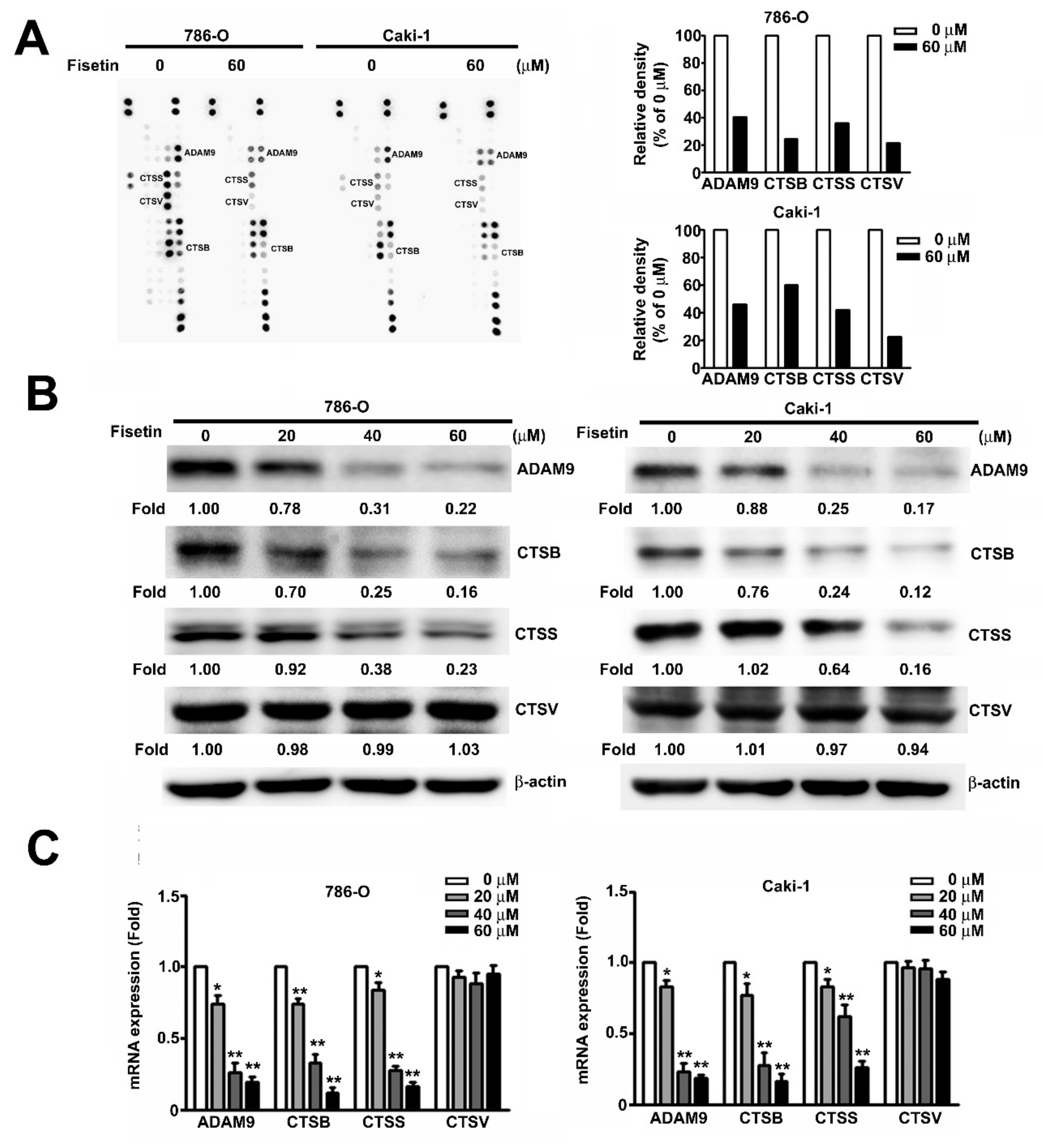 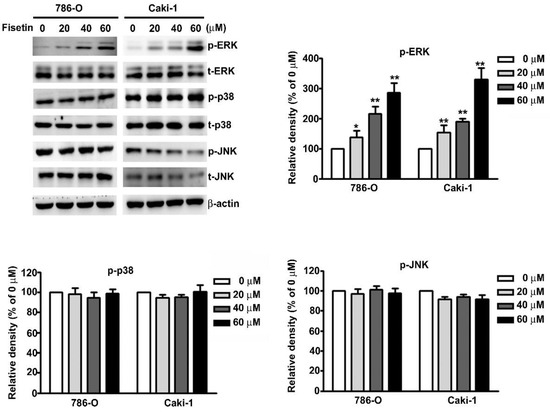 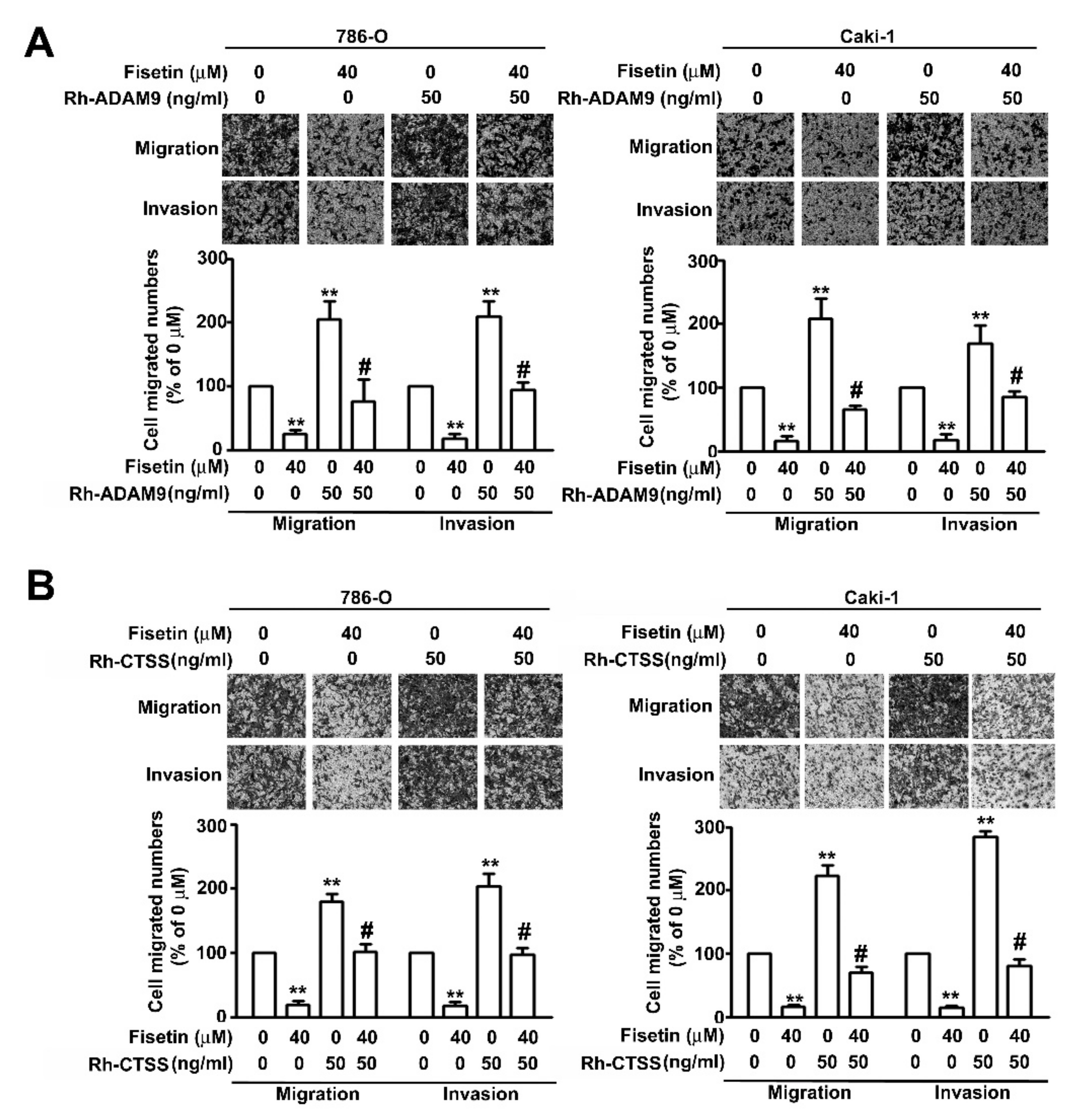 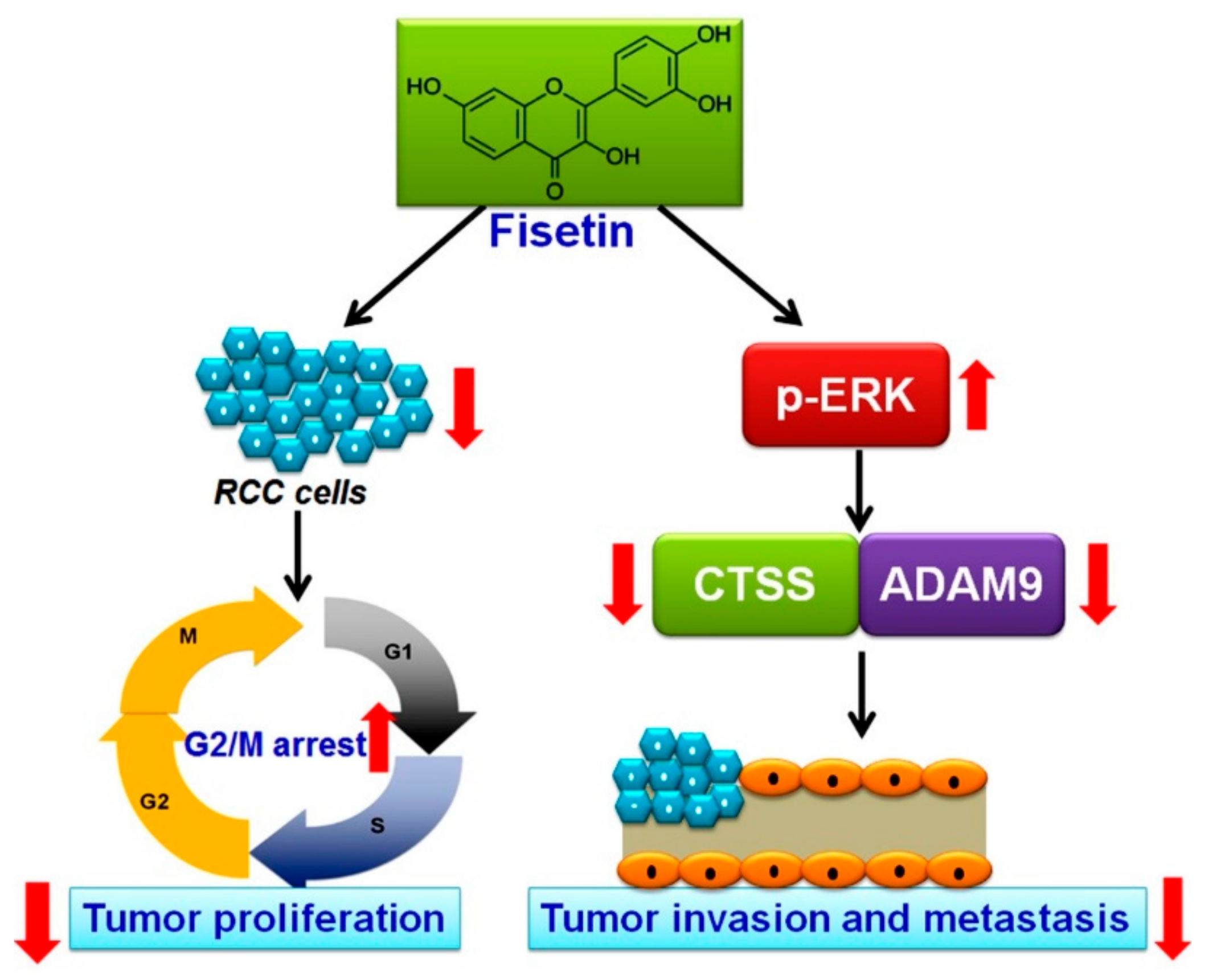