A Mitochondrial Encoded Messenger at the Nucleus

The Unfolded Protein Response Pathway in the Yeast Kluyveromyces lactis. A Comparative View among Yeast Species

Eukaryotic cells have evolved signalling pathways that allow adaptation to harmful conditions that disrupt endoplasmic reticulum (ER) homeostasis. When the function of the ER is compromised in a condition known as ER stress, the cell triggers the unfolded protein response (UPR) in order to restore ER homeostasis. Accumulation of misfolded proteins due to stress conditions activates the UPR pathway. In mammalian cells, the UPR is composed of three branches, each containing an ER sensor (PERK, ATF6 and IRE1). However, in yeast species, the only sensor present is the inositol-requiring enzyme Ire1. To cope with unfolded protein accumulation, Ire1 triggers either a transcriptional response mediated by a transcriptional factor that belongs to the bZIP transcription factor family or an mRNA degradation process. In this review, we address the current knowledge of the UPR pathway in several yeast species: Saccharomyces cerevisiae, Schizosaccharomyces pombe, Candida glabrata, Cryptococcus neoformans, and Candida albicans. We also include unpublished data on the UPR pathway of the budding yeast Kluyveromyces lactis. We describe the basic components of the UPR pathway along with similarities and differences in the UPR mechanism that are present in these yeast species. View Full-Text
Keywords: yeast; endoplasmic reticulum; stress; UPR; Ire1; Hac1; Kar2 yeast; endoplasmic reticulum; stress; UPR; Ire1; Hac1; Kar2
►▼ Show Figures 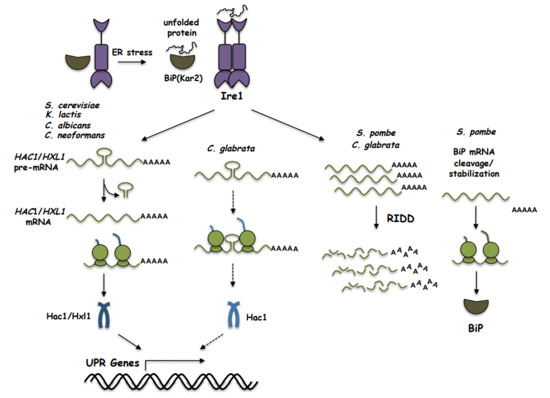