Review
Understanding the Biology of Self-Renewing Macrophages
by

:
Macrophages reside in specific territories in organs, where they contribute to the development, homeostasis, and repair of tissues. Recent work has shown that the size of tissue macrophage populations has an impact on tissue functions and is determined by the balance between replenishment and elimination. Macrophage replenishment is mainly due to self-renewal of macrophages, with a secondary contribution from blood monocytes. Self-renewal is a recently discovered trait of macrophages, which can have a major impact on their physiological functions and hence on the wellbeing of the organism. In this review, I discuss our current understanding of the developmental origin of self-renewing macrophages and the mechanisms used to maintain a physiologically stable macrophage pool.
Keywords:
macrophage; leukocyte biology; stem cell; proliferation

5. Macrophage Self-Renewal in the Serous Cavities

6. Self-Renewing Resident Macrophages of the Heart and the Artery Wall

Macrophages in the heart have key roles both in cardiac development and remodeling, and a very recent study proposed that they are also necessary for electrical conductance [63,64]. In mice, cardiac macrophages appear at E10.5 and can be classified into various subsets, such as yolk sac-derived CCR2− and CCR2+ macrophages, recombination activating gene 1-positive macrophages, which are lympho-myeloid cell-derived, and Fms-like tyrosine kinase 3-positive macrophages, which develop from fetal monocytes [65]. Macrophage precursors have been shown to seed the embryonic heart beneath the epicardium [66]. With aging, these embryonic, self-renewing macrophages are gradually infiltrated by monocyte-derived macrophages [67,68].
We still know little about the specific functions of macrophage self-renewal in the heart. It has been shown, however, that coronary artery morphogenesis requires yolk sac-derived CCR2− heart-resident macrophages [65] and, in adulthood, a local expansion of cardiac macrophages occurs during cardiac remodeling [63]. Moreover, a recent study showed that cardiac macrophage proliferation occurs within the first week following pressure overload hypertrophy and is necessary for the myocardial adaptive response [69].
The adventitial layer of the large arteries has also been found to contain resident macrophages that develop from CX3CR1+ yolk sac macrophage precursors and retain self-renewal ability [70]. In adults, these arterial macrophages are sustained by local proliferation. Moreover, because arteries contain mesenchymal cells that produce the CX3CR1 ligand CX3CL1, the CX3CR1+ resident macrophage pool can be maintained [71].

Adipose tissue is a reservoir for innate immune cells [77], the most prevalent of which are resident adipose tissue macrophages (ATMs), whose functions are to dispose of dying adipocytes, remove cellular pathogens, process lipids, and release various mediators that maintain a healthy metabolism [10,78]. Accordingly, adipose tissue is critically dependent on resident ATMs to perform these vital tasks [10,79,80,81]. ATMs develop from yolk sac progenitors, but monocytes also contribute to the ATM pool [12,35,82]. Indeed, bone marrow transplantation cannot replace the entire ATM pool in the mouse [83]. This dual origin of ATMs may explain why some metabolic effects of ATMs cannot be transmitted by bone marrow transplantation [84].
The metabolic status of adipocytes is a determining factor of ATM output. Under homeostatic conditions, ATMs adopt a pro-resolving phenotype [81] and provide metabolic benefits by supporting the function of adipocytes; however, owing to their roles in tissue remodeling and injury response, they can provoke adipose tissue fibrosis by expressing pro-fibrotic mediators [85], which may be unfavorable. As mentioned earlier, recent studies have shown that there are balanced replenishment and removal of pro-resolving ATMs, which function to maintain a metabolically beneficial ATM pool [8,9]. ATM homeostasis is believed to be sustained by self-renewal [8] and not to depend on circulating monocytes [83]. The adipose tissue also has a mechanism to eliminate ATMs via the activity of type 1 innate lymphoid cells [9] (Figure 2A). In obesity, this balance is compromised, increasing the total ATM number and provoking the dominance of inflammatory ATMs [8,12,86] (Figure 2B).
Specifically, in obese adipose tissue, lipid-overloaded adipocytes undergo apoptosis or secondary necrosis, releasing various danger signals such as modified lipids and nucleic acids [78]. In response to this, ATMs adopt an inflammatory activation state that is damaging to the metabolism [10] and secrete inflammatory mediators and nitric oxide, resembling a pathogen-killing immune response [80,81]. These inflammatory mediators inhibit insulin signaling, which in turn provokes insulin resistance in the adipose tissue. When adipose tissue inflammation persists for a prolonged period, ATM-derived inflammatory mediators are released into circulation, leading to the development of systemic insulin resistance [10,87] and also driving type 1 diabetes mellitus via secondary toxic effects on the pancreatic β cells [87]. Obesity increases ATM self-renewal, giving rise to an increase in the number of inflammatory ATMs [12,88,89]. Moreover, obesity boosts monocyte infiltration of the adipose tissue, and ATMs increase myelopoiesis, accelerating monocyte infiltration into the obese adipose tissue [90,91]. Impeding inflammatory ATM expansion in the obese adipose tissue and increasing the amount of pro-resolving resident ATMs are envisaged as treatment modalities for insulin resistance [10,78]. However, the metabolic impact of the pro-resolving ATMs is still not fully understood [92,93], and excess number of pro-resolving ATMs also can have unwanted metabolic effects [14]. Moreover, it is also an intriguing question whether long-lived tissue-resident ATMs give rise to inflammatory ATMs in obesity, or the resident ATMs are replaced by monocyte-derived inflammatory macrophages [94]. Similarly, it is still not well defined whether, upon the resolution of inflammation, the inflammatory ATMs adopt a pro-resolving phenotype. This possibility is suggested by in vitro studies showing that the inflammatory macrophage phenotype can be reverted to a pro-resolving phenotype [81,95]. It is also possible, however, that pro-resolving resident ATMs expand and restore tissue homeostasis [8]. However, today we lack pharmacological tools which would effectively alter the inflammatory/pro-resolving ATM phenotype without inducing negative effects on the innate immune response [10,96]. Moreover, the lack of an effective “switch-off mechanism” of cytotoxic nitric oxide secretion by inflammatory macrophages challenges the possibility that an inflammatory macrophage is able to regain a pro-resolving phenotype (this possibility is further discussed in [97]). While it remains to be seen how ATM self-renewal is supported under physiological conditions and in obesity, it is possible that cell cycle entry of pro-resolving and pro-inflammatory ATMs is controlled by distinct signaling mechanisms.

9. Self-Renewal of Resident Macrophages in the Mammary Gland

M-CSF is considered the major signal essential for determining macrophage number, while IL-34 is important in some tissue macrophage populations such as microglia and skin Langerhans cells [7,36,37,117]. Both M-CSF and IL-34 signal through the M-CSF receptor on macrophages [7,36,37,117]. Interestingly, macrophages of the liver and the spleen specifically degrade M-CSF, reducing its local availability [118]. This might therefore be one determinant of the size of the macrophage pools in their specific tissue niches [37]. As detailed in this review, a proportion of tissue macrophages develop from bone marrow progenitors, and tissue macrophages may control bone marrow hematopoiesis via feedback mechanisms; for example, ATMs increase bone marrow myelopoiesis in obesity [90].
Little is known about the signals that increase cell cycle entry and sustain the self-renewal of tissue-resident macrophages (Figure 3). IL-4 seems to support macrophage self-renewal [13,57] and leads to M-CSF-independent proliferation of macrophages [119]. Nonetheless, it has also been shown that IL-4 inhibits M-CSF-dependent entry into the cell cycle [120]. We recently showed that neuropeptide FF (NPFF), which sustains IL-4 signaling in macrophages, increases macrophage self-renewal [8]. The underlying mechanism is, however, independent of IL-4 signaling and seems to be due to the suppression of cell cycle inhibitor genes such as the interferon inducible 200 family members [8]. Moreover, NPFF reduces the level of the transcription factor MafB in macrophages [8], and a decrease in MafB levels has been shown to increase the proliferation of macrophage progenitors [121,122]. In addition to NPFF, the nuclear receptor RXR (retinoid X receptor) is known to control MafB levels in macrophages [121]. Other signals, such as adiponectin [86], Fc-mediated phagocytosis and complement activation [123], uptake of Cryptococcus cells [123], and oxidized low-density lipoprotein (Ox-LDL) [124] are also known to increase macrophage self-renewal (Figure 3). The underlying mechanisms are not fully understood yet. For instance, it is known that Ox-LDL causes M-CSF release from macrophages, leading to p38 MAPK/Akt signaling, which may increase cell cycle entry of macrophages [125,126,127]. This effect of Ox-LDL is controlled by various signal mechanisms, such as those mediated by AMP-activated protein kinase [126] and NFκB [128].
Macrophages occupy specific niches in tissues, which raises the possibility that different tissue-resident macrophages have unique transcriptional programs to control self-renewal. For example, Kruppel-like factor 4 (KLF4) is key for regulating cardiac macrophage proliferation [69], mTORC2 signaling is necessary for peritoneal macrophage development [129], sirtuin-1 inhibition reduces alveolar and peritoneal macrophage self-renewal [130], and NPFF receptor expression is higher in ATMs than in other macrophage types [8]. Overall, these observations suggest that macrophage self-renewal may be controlled by tissue-specific mechanisms.
In the setting of inflammation, macrophage self-renewal is suspended, and macrophages adopt a pathogen-eliminating phenotype. This requires global transcriptional changes, for instance, a shift from Myc-controlled transcriptional control of self-renewal to a hypoxia-inducible factor alpha (HIF1α)-dependent transcriptional program for pathogen clearing. Inflammatory signals, hence, suppress Myc and also inhibit macrophage self-renewal [131]. It is well known that LPS, the major cell wall component of Gram-negative bacteria, arrests the macrophage cell cycle. The underlying mechanism involves the reduced expression of cyclin D1, which is key for cell cycle entry [132]. Moreover, LPS suppresses cyclin A2 expression and increases macrophage expression of cyclin-dependent kinase inhibitor 2D and nuclear factor of kappa light chain gene enhancer [133]. Overall, the effects of LPS inhibit the transition from G1 to S. Likewise, inflammatory mediators such as TNFα, IFNγ, and arachidonic acid, and intracellular pathogens such as Mycobacterium species block macrophage cell cycle progression [134,135,136,137,138]. The underlying mechanisms involve a reduced transcription of cell cycle “checkpoint” genes, which eventually block G1/S transition or slow down the cell cycle (Figure 3).
Despite its importance, there is a paucity of information on the signals that limit macrophage self-renewal in a physiological setting, which is important for tissue development and function. Nuclear receptor signaling, including liver X (LXR) and RXR, has been shown to block macrophage cell cycle [139,140], although many macrophages which have active LXR and RXR signaling can still enter the cell cycle [121,141]. Adenosine [142], cAMP [8,142,143], and the uptake of apoptotic cells [144] are also known to inhibit macrophage cell cycle (Figure 3). How these signals are orchestrated remains to be explored.

T.R. conceived the paper and wrote the manuscript.

Work in the author´s laboratory is supported by the German Research Fund (DFG, No. RO 4856) and the European Foundation for the Study of Diabetes on New Targets for Type 2 Diabetes, Supported by MSD (No. 96403).

Artworks for Figure 1B have been licensed from Dreamstime Stock Photography, with model release. I thank Kenneth McCreath for critically reading the manuscript. This article is dedicated to the memory of Magdolna Papp. “Oh if the Master only would provide a bed for my brook’s current and thus guide my steps on sheltered pathways toward the sea”. 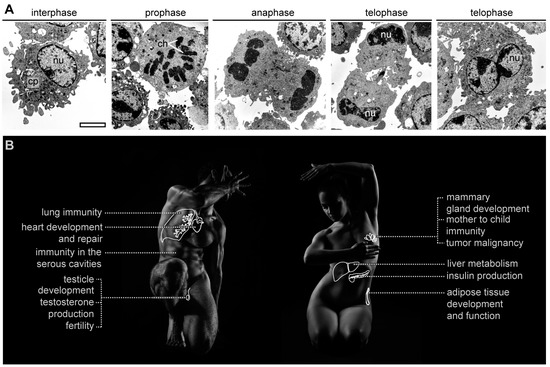 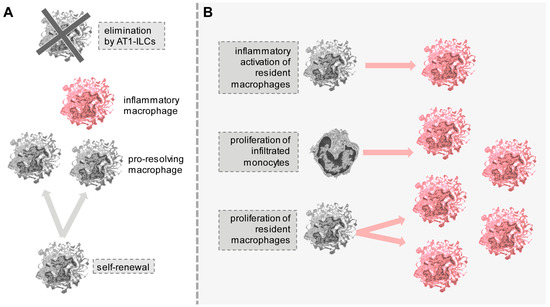 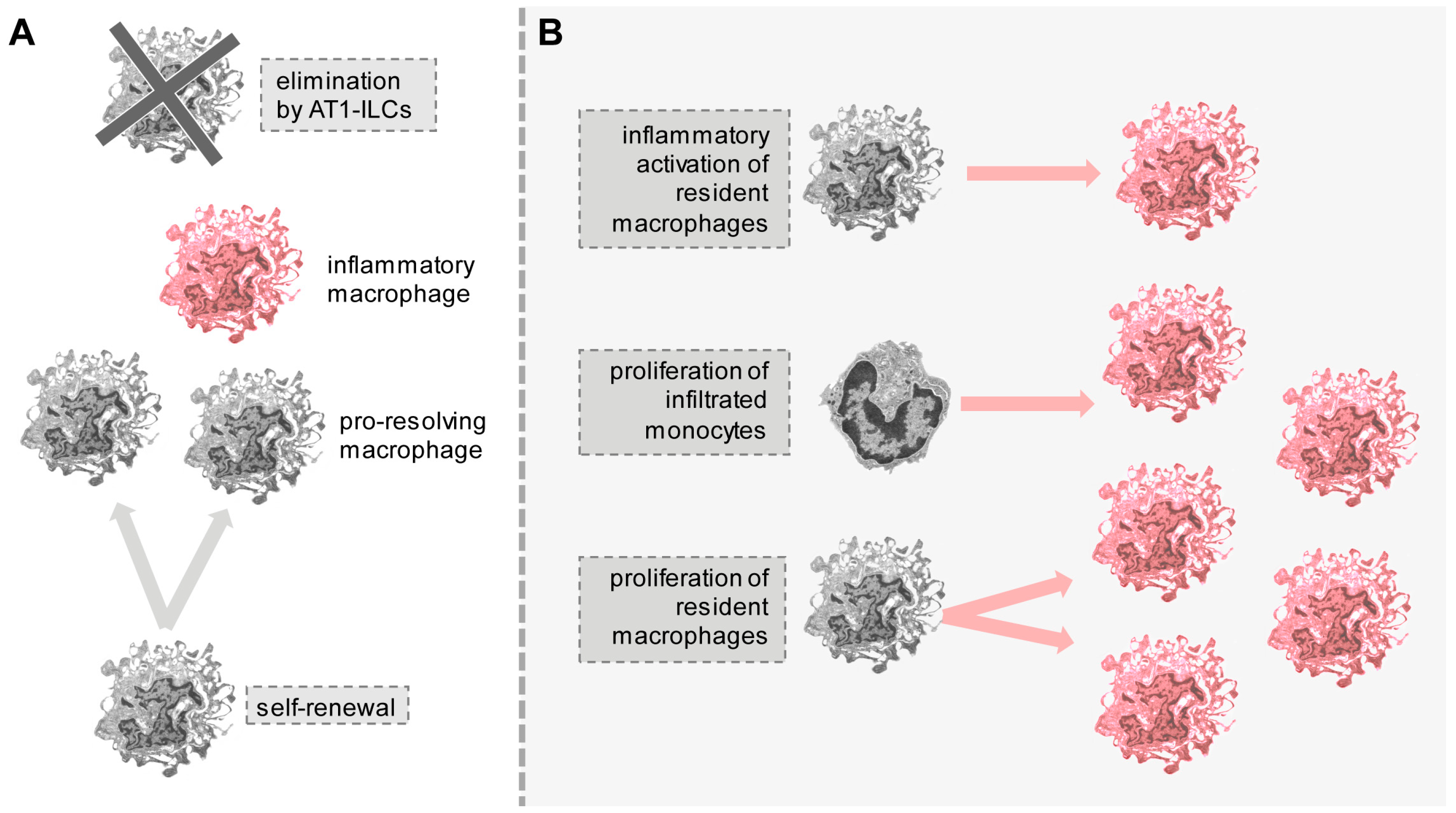