:
Non-canonical NF-κB signalling plays important roles in the development and function of the immune system but it also is deregulated in a number of inflammatory diseases. Although, NF-κB and HIF crosstalk has been documented, this has only been described following canonical NF-κB stimulation, involving RelA/p50 and the HIF-1 dimer. Here, we report that the non-canonical inducer TNFSF14/LIGHT leads to HIF induction and activation in cancer cells. We demonstrate that only HIF-2α is induced at the transcriptional level following non-canonical NF-κB activation, via a mechanism that is dependent on the p52 subunit. Furthermore, we demonstrate that p52 can bind to the HIF-2α promoter in cells. These results indicate that non-canonical NF-κB can lead to HIF signalling implicating HIF-2α as one of the downstream effectors of this pathway in cells.
Keywords:
HIF; NF-κB; EPAS1; LIGHT; TNFSF14; p52; NIK; ChIP

NF-κB is the name of a family of transcription factors that is mostly known for their function in regulation of the cellular response to infection and inflammation [1], but it also has pleotropic functions in responses to a number of cellular stresses, such as DNA damage and hypoxia [2]. Given its role in the control of inflammatory responses, it has also been widely associated with cancer, where it can act as both as tumour suppressor and tumour promoter [3,4].
NF-κB encompasses five genes that give rise to seven proteins, RelA/p65, RelB, cRel, NFKB1/p105 and p50, and NFKB2/p100 and p52 [5]. Due to its importance, it is kept under several strict control mechanisms, such cellular localisation, binding to inhibitor proteins and numerous negative feedback loops [6]. Activation of NF-κB follows, in a simplified view, three main pathways: canonical, non-canonical, and atypical activation pathways, which are dependent on the involvement of the upstream kinases called Inhibitor of κB (IκB) kinases (IKK) [2]. The canonical pathway, responding to stimuli, such as TNF-α and IL-1β, activates the IKK complex, leading to the phosphorylation and inactivation of IκB proteins, and the consequent release of the NF-κB dimers, mainly containing RelA and p50 [5]. Once translocated into the nucleus, NF-κB subunits can receive additional control mechanisms, such as post-translational modifications [7], to induce or repress the specific and appropriate complement of target genes. In the non-canonical pathway, stimuli, such as B-cell activating Factor, or Lymphotoxin-β, activate the NF-κB activating Kinase (NIK), which phosphorylates and activates IKKα, leading, in turn, to the phosphorylation and processing of p100 into p52 [8]. This event releases primarily the RelB/p52 dimers, now able to translocate into the nucleus, and together with additional stimulus-specific inputs activate or repress specific genes in cells. Atypical pathways, usual activate NF-κB independent of IKKs, or act on nuclear NF-κB subunits [2].
NF-κB transcription factors are also known to crosstalk to other transcription factors, such as p53, E2F1, and HIF [9,10,11,12], amongst others. HIF is an important family of transcription factors (HIF-1α, HIF-2α, or HIF-3α partnered with HIF-1β), which are known for their role in the response to reduction in oxygen availability or hypoxia [13]. Although HIF is mainly controlled by the activity of the oxygen sensor prolyl-hydroxylases enzymes (PHDs) [14], other mechanisms are also important to control the expression and activity of HIF [10,12,15]. We and others have shown that, in response to canonical pathway activating stimuli, NF-κB is able to induce HIF-1α [16,17,18,19] and HIF-1β [18] directly, and some reports indicate that HIF-3α is also controlled by NF-κB [20,21]. However, so far, no direct control of HIF-2α gene by NF-κB subunits has been reported, although we had previously identified an indirect role for NF-κB to induce HIF-2α in response to TNF-α [18].
TNFSF14 or LIGHT is a non-canonical inducer of NF-κB, analogous to Lymphotoxin-β [22], which also is able to induce the canonical pathway in parallel [23]. It has been shown to control inflammation resolution in the intestine in mice [24], but to also enhance immune-mediated reduction of metastasis in colon cancer [25]. On the other hand, it increases adipose tissue inflammation [26]. Here, we demonstrate that LIGHT can induce the non-canonical NF-κB pathway in two types of cancer cells. In addition, we show that LIGHT can induce the expression and activity of HIF-1α and HIF-2α. Mechanistically, LIGHT induces the mRNA expression of HIF-2α, but not HIF-1α or HIF-1β. LIGHT-induced p52 is required for the elevation of HIF-2α mRNA and protein. Finally, we identify specific binding sites for p52 at the HIF-2α promoter, indicating a direct control of p52 over the HIF-2α gene.

Empty vector control and pCMV4-NIK-HA (a gift from Shao-Cong Sun (Addgene, Teddinghton, UK; plasmid #27554), [28]) were transfected into HeLa cells using TurboFect (ThermoFisher, Paisley, UK), according to the manufacturer’s instructions. Media was changed 4 h post-transfection and cells were lysed for western blot after 48 h.

2 × 105 cells stably transfected with a luciferase reporter gene (based on the HRE present at the iNOS promoter) were seeded in six-well plates, stimulated with LIGHT for the indicated times, and harvested with 400 µL of Passive Lysis Buffer (Promega, Southampton, UK). Luciferase activity was measured according to manufacturer’s instructions (Luciferase Assay System, Promega, Southampton, UK), and was normalised to protein concentration (Bradford, BioRad, Watford, UK). All of the experiments were performed a minimum of three times before calculating average and standard error of the means.

Means, standard deviations, and standard error means were calculated prior to performing Student t tests on a minimum of three independent experiments and calculating p-values. * = p < 0.050; ** = p < 0.010; and, *** = p < 0.001. This analysis was used for comparing two conditions only. One-way Anova analysis, followed by Dunnett test was used for comparing multiple conditions to a control condition only, or Tukey test for multiple pair-wise condition comparisons.

In this report, we demonstrate that the HIF-2α gene is responsive to the activation of non-canonical NF-κB subunits, p52 and RelB, when LIGHT is used as a stimulus. Although other HIF subunits have been shown to be directly controlled by NF-κB [16,18], these have been as a consequence of activation of the canonical NF-κB pathways and have not shown any direct effect on HIF-2α.
Our results demonstrate that non-canonical activation of NF-κB is also able to induce the expression and activity of HIF transcription factors, but in this case, the effect is mediated by p52 on the HIF-2α gene in both cell lines that we tested. This has implications for situations where non-canonical signalling is high, such as inflammatory conditions and pathogenic infections [39], since this would result in a “pseudo-hypoxic” environment, with HIF transcription factors being activated. In fact, studies in patients with Helicobacter pilori, a pathogen that can activate non-canonical NF-κB [39] and can lead to gastric cancer [40], have shown increased levels of HIF-2α in patient biopsies [41]. However, these studies did not determine the mechanism behind the increased level of HIF-2α expression, and as such, more work is necessary to determine whether the mechanism we identified in our study is present under such conditions.
Non-canonical NF-κB is important for B cell development and the expression of Germinal Centres [39], however, whether HIF-2α has any involvement in these functions is still under-investigated. Interestingly, a recent study revealed that the HIF system, including VHL and HIF-1α and HIF-2α, are involved in germinal centre functional regulation, in particular, regarding antibody quality [42]. These findings, together with the results presented here suggest a potential functional crosstalk occurring between non-canonical NF-κB signalling and HIF. In addition, it is known that HIF-2α is expressed in B cell lymphoma [36,43]. As such, our findings raise two possibilities, one that HIF-2α contributes to non-canonical NF-κB signalling in normal B cells, or alternatively, HIF-2α is expressed under pathological conditions of non-canonical NF-κB activation, such as those that are present in cancer cells.
Very little is known about HIF-2α gene regulation. Our own studies, trying to address this lack of knowledge, have found that HIF-2α is regulated by E2F1 [36], and more recently by SP1 and the transcriptional repressor complex SIN3A-HDAC, via the action of SINHCAF [44]. Although no direct interaction between E2F1 and p52 has been described so far, both of them are required for cell cycle progression [31,36], and as such are thought to be part of a similar network. We did not find, however, any effect in the levels of E2F1 following LIGHT treatment, further implicating p52 in the regulation of HIF-2α under the conditions that are investigated here. Although we have found direct binding of p52 to the HIF-2α gene, additional work would be required to determine the importance of these binding sites for HIF-2α expression. Reporter assays, including mutational analysis, and eventually, the ablation of these binding sites in the genome of cells using CRISPR-Cas9 technology would be necessary to answer these questions. Furthermore, ChIP-sequencing analysis for p52 and/or RelB would also allow for us to identify additional bona fide binding sites in cancer cells.
Understanding the differential regulation of the HIF genes will help to determine how the same transcription factor can have opposing roles in different tissues. For example, while it is clear that HIF-2α acts as an oncogene in renal cancer [45], it can act as a tumour suppressor in sarcoma [46] and possibly other tissues as well [44]. Investigating alternative regulatory mechanisms to classic oxygen regulation will help to identify mechanisms responsible for tissue specific actions of these transcription factors.

We thank Shao-Cung Son (University of Texas, USA) for the NIK plasmid. We would also like to thank Ron Hay and his lab (University of Dundee) for technical help during this project. In addition, we would like to thank the IIB account office for expedited ordering of reagents during the revisions of this work. 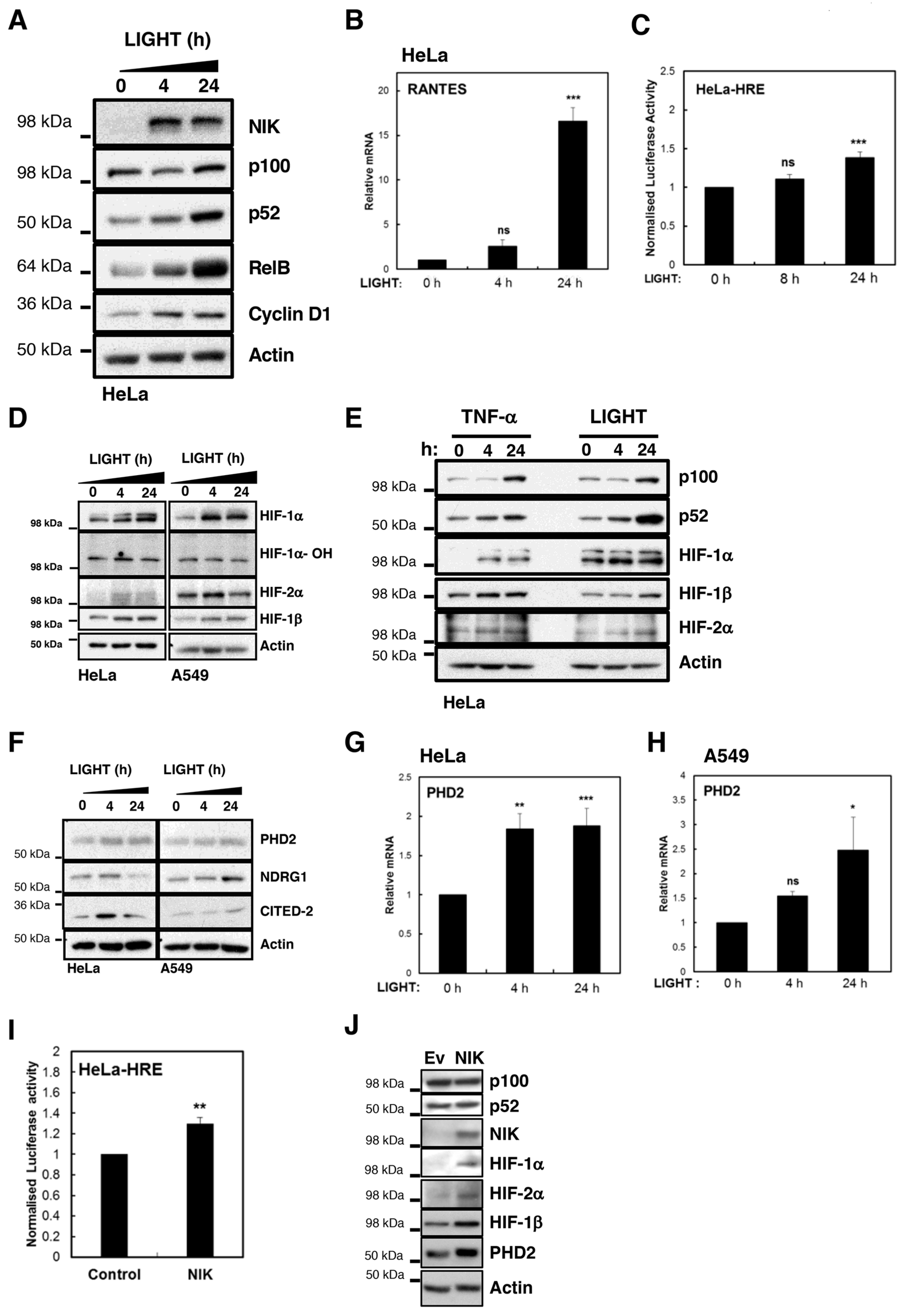 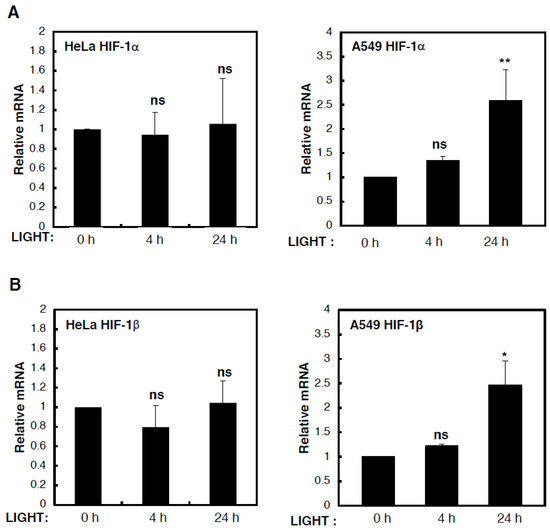 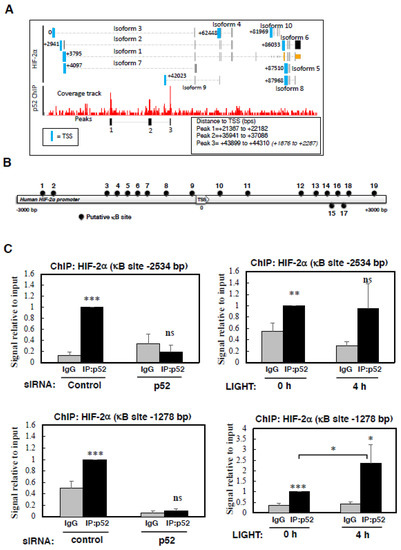 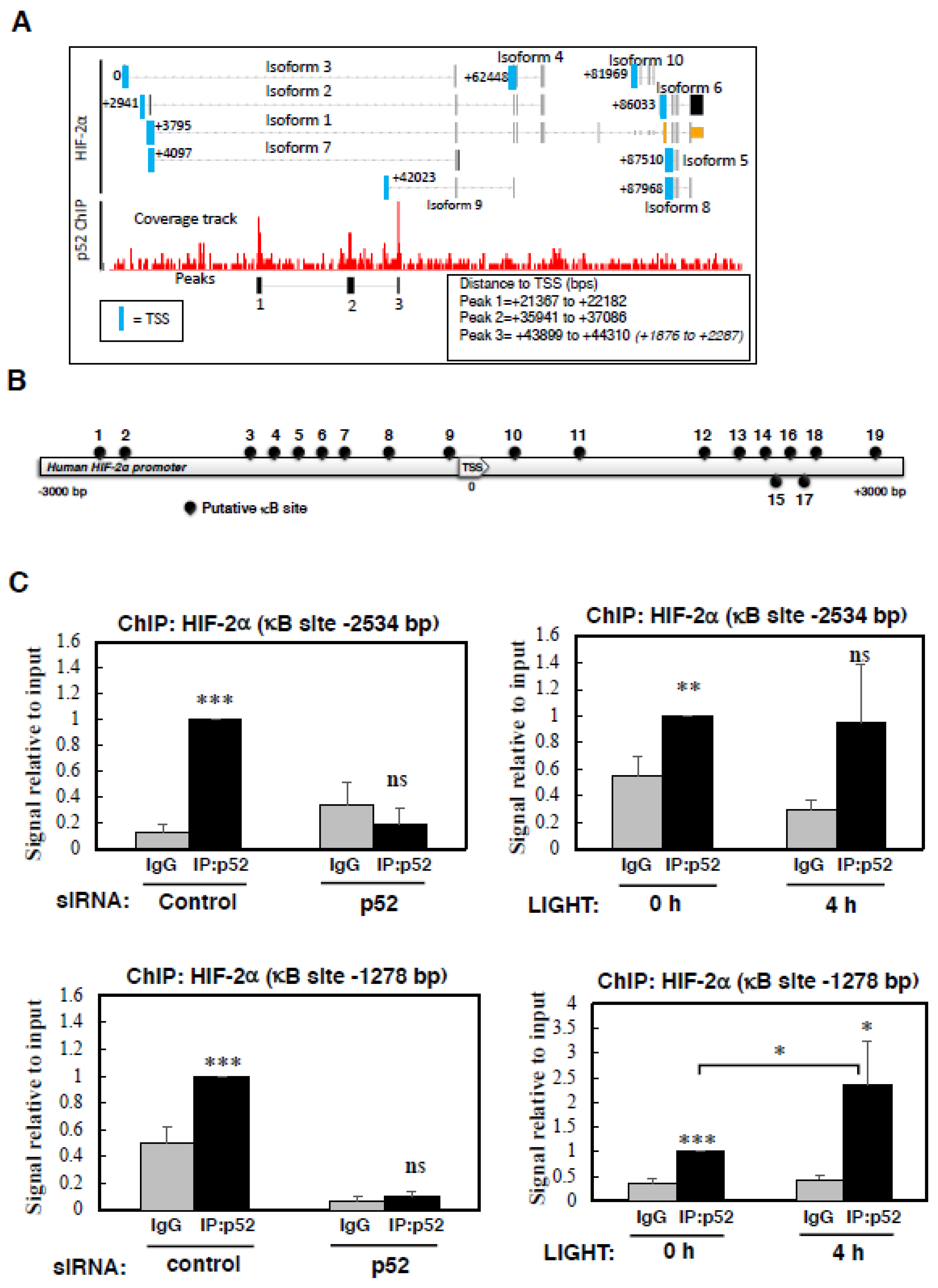