Nanopipettes as Monitoring Probes for the Single Living Cell: State of the Art and Future Directions in Molecular Biology

Apoptosis, or programmed cell death, is a tightly regulated cell suicide program that is critical during normal development and in cancer treatment [1]. Apoptosis involves a signaling cascade that, ultimately, activates a family of proteases known as caspases. In response to various stimuli, apoptosis begins with the activation of “initiator” caspases, which cleave and activate “executioner” caspases (caspase-3, -6, and/or -7) [1,2,3]. Upon activation, these “executioner” caspases cleave various structural and repair proteins at the aspartate-glutamate-valine-aspartate (DEVD) amino acid sequence, resulting in apoptotic cell death [2]. Current cytotoxic anticancer therapies commonly induce apoptosis of malignant cells. However, cancer cells can employ one or multiple mechanisms to evade apoptosis.
Recent advances in fluorescence microscopy and fluorescent probe development have increased our understanding of cellular biology and cancer progression. Förster resonance energy transfer (FRET) is one such technique that has greatly contributed to our understanding of protein interactions and signaling within a cell. FRET is a distance-dependent physical phenomenon by which energy is transferred from one excited fluorophore (also known as the donor) to a nearby acceptor, in this case, another nearby fluorophore [3]. For FRET to occur between two fluorescent proteins, the emission spectrum of the donor molecule must overlap with the excitation spectrum of the acceptor. Since this reaction is distance-dependent, FRET can be used to determine interactions of proteins or protein domains of up to a distance of 10–100 Å [4]. FRET is typically measured ratiometrically, using the relative fluorescence intensities of the excited donor and acceptor proteins. Efficient FRET is defined as a reduction of donor fluorescence relative to acceptor fluorescence. However, intensity-based FRET can be distorted by relative concentrations of donor and acceptor molecules, sample movement, excitation fluctuation, as well as the wavelength-dependent differences in attenuation and scattering of light in tissues [5,6,7].
To overcome deficiencies common to ratiometric FRET, we, and others, have employed fluorescence lifetime imaging microscopy (FLIM) to quantify FRET. FLIM measures changes in fluorescence lifetime based on phase delay and the modulation ratio of light emitted from a fluorescent molecule relative to the excitation light [8]. The lifetime of a fluorophore is the measure of time an excited fluorophore stays in an excited state before returning to its ground state [9]. FRET interactions shorten the fluorescence lifetime of a donor fluorophore. FLIM offers several advantages over other imaging techniques for quantifying FRET. Primarily, unlike intensity-based ratiometric quantification, the fluorescence lifetime of a molecule is independent of the probe concentration or tissue depth. Therefore, this technique is better suited for 3D and in vivo models. FLIM also helps eliminate problems of bleed-through fluorescence from the donor molecule or direct excitation of the acceptor.
Here, we used FLIM to monitor a caspase-3 FRET imaging reporter to quantify apoptosis in in vitro and in vivo models [10,11,12,13,14]. The specifics of the FRET pair, LSS-mOrabge and mKate2, have been previously described [8]. The caspase-3 reporter is engineered to link LSS-mOrange (donor) and mKate2 (acceptor) fluorescent molecules through the canonical DEVD sequence recognized by the caspase-3 enzyme. LSS-mOrange represents the ideal donor as the long Stokes shift can easily separate the excitation of LSS-mOrange from mKate2, while still providing a large spectral overlap for FRET to occur. In cells that do not activate caspase-3, the reporter remains intact and allows FRET to occur upon excitation of LSS-mOrange, reducing its lifetime. Cells that activate caspase-3 cleave the DEVD sequence that links LSS-mOrange and mKate2, causing the two fluorescent proteins to separate and the lifetime of LSS-mOrange increases. Therefore, cells that undergo apoptosis will display reduced FRET, which correlates to a longer lifetime of LSS-mOrange.
In the following protocol, we describe in detail the necessary steps to measure apoptosis via FLIM-FRET in different experimental models and in response to various treatments. The first protocol explains how to generate cells that contain the LSSmOrange-DEVD-mKate2 apoptosis imaging reporter, as well as the appropriate control cells. We use these cells to describe how to detect apoptosis levels in 2D cell culture, 3D spheroids, and in vivo mouse models. We describe useful genetic perturbations, as well as pharmaceutical drugs, as a means to alter apoptosis. We also list selected methods to validate imaging data acquired for caspase-3 activation and apoptosis. Overall, the imaging methods described here offer new opportunities to investigate cell apoptosis at the single cell level in both 2D and 3D systems, which can enhance our understanding of tumor heterogeneity and drug resistance.

In Protocol 1, we describe how to transduce HEK-293T human embryonic kidney and MDA-MB-231 metastatic breast cancer cell lines to stably express either the control reporter, LSS-mOrange, or the caspase-3 apoptosis reporter, LSS-mOrange-DEVD-mKate2. Other cell lines may be used for constitutive expression and experiments at investigators’ discretions. First, we outline the creation of the lentiviral vector, LSS-mOrange pLVX IRES blasticidin, and the PiggyBac transposon vector, LSS-mOrange-DEVD-mKate2. Stably-expressing cell lines are created by inserting the vectors into cells. Finally, we describe how to select for a population of uniformly-expressing cells required for fluorescence experiments with the desired reporters through blasticidin drug selection or fluorescence-activated cell sorting (FACS).

In this protocol, we describe experimental setup of cells utilizing the caspase-3 fluorescent reporter to study cellular apoptotic states in a variety of settings. We describe techniques, such as flat-culture, spheroids, and murine models in which cellular states are perturbed by various drugs, nutrient deprivation, and a plasmid encoding pro-apoptotic protein BAX.

In Protocol 3, we describe how to use the commercially available Seahorse Bioscience XFe analyzer and glycolysis stress test. The metabolic flux data are correlated with apoptosis measurements from the caspase-3 reporter under various nutrient and drug conditions.

Here, we outline the steps for imaging the caspase-3 reporter using FLIM in the various experimental environments discussed in Protocol 2. FLIM measures the lifetime of LSS-mOrange in the reporter, identifying cells undergoing apoptosis by a longer lifetime of this fluorescent protein.

FRET between LSS-mOrange and mKate2 will cause the higher-energy donor fluorescent protein (LSS-mOrange) to have a shorter fluorescence lifetime. Energy transfer between these two molecules will occur if they are spatially close to one another, as shown in the intact reporter construct. Once the DEVD sequence has been cleaved by caspase-3 during apoptosis, the LSS-mOrange and mKate2 FRET pair spatially separate. Separation of these proteins minimizes energy transfer from LSS-mOrange to mKate-2 and increases the donor’s lifetime (Figure 1).
In Protocols 2 and 4, we discuss multiple experimental setups and imaging protocols, respectively. We expect the LSS-mOrange control cells to display a longer fluorescence lifetime than cells expressing fused LSS-mOrange-DEVD-mKate2 due to the lack of energy being transferred from the donor protein. Any treatment that causes apoptotic cell death will display an increased fraction of cells with a longer lifetime of LSS-mOrange due to cleavage at DEVD sites. The shift to the longer lifetime of LSS-mOrange occurs in 2D environments with increasing amounts of BAX-encoding plasmid, decreasing the availability of essential nutrients, and treating with different concentrations of pro-apoptotic drugs (Figure 2). The 3D spheroid and murine models will also display the same patterns; groups treated with trametinib will display increased apoptosis over their vehicle control.
Protocol 3 details how to perform a metabolic flux assay on cells used in the FLIM studies. We used the commercially available metabolic flux assay and glucose stress test along with the Seahorse Bioscience XFe analyzer. These data can be correlated with a 2D nutrient deprivation study and subsequent FLIM imaging of the LSS-mOrange-DEVD-mKate2 reporter. Metabolically active cells with increased rates of both oxygen consumption and extracellular acidification will display less apoptotic cell death.
Future implications of this technology include screening for compounds that induce cellular apoptosis in cancer cells. While cells in 2D environments may present with morphological changes when beginning to undergo apoptosis, it is more difficult to visualize these changes in cells in 3D environments. The usefulness of FRET apoptosis reporter constructs is highlighted by the recent use of a similar construct to detect caspase-3 activation in a mouse xenograft model [19]. This reporter allows for efficient screening of apoptosis in complex environments and we have previously used this reporter to quantify apoptosis in 3D and mouse models of breast cancer [9]. 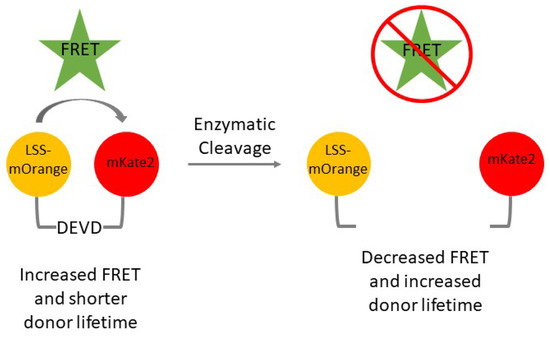 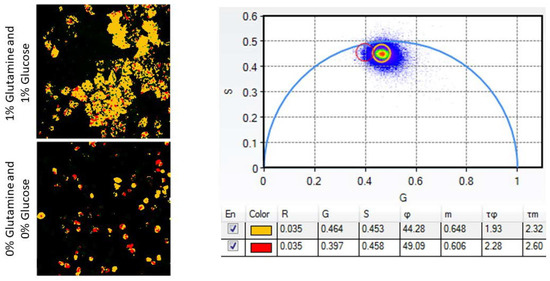 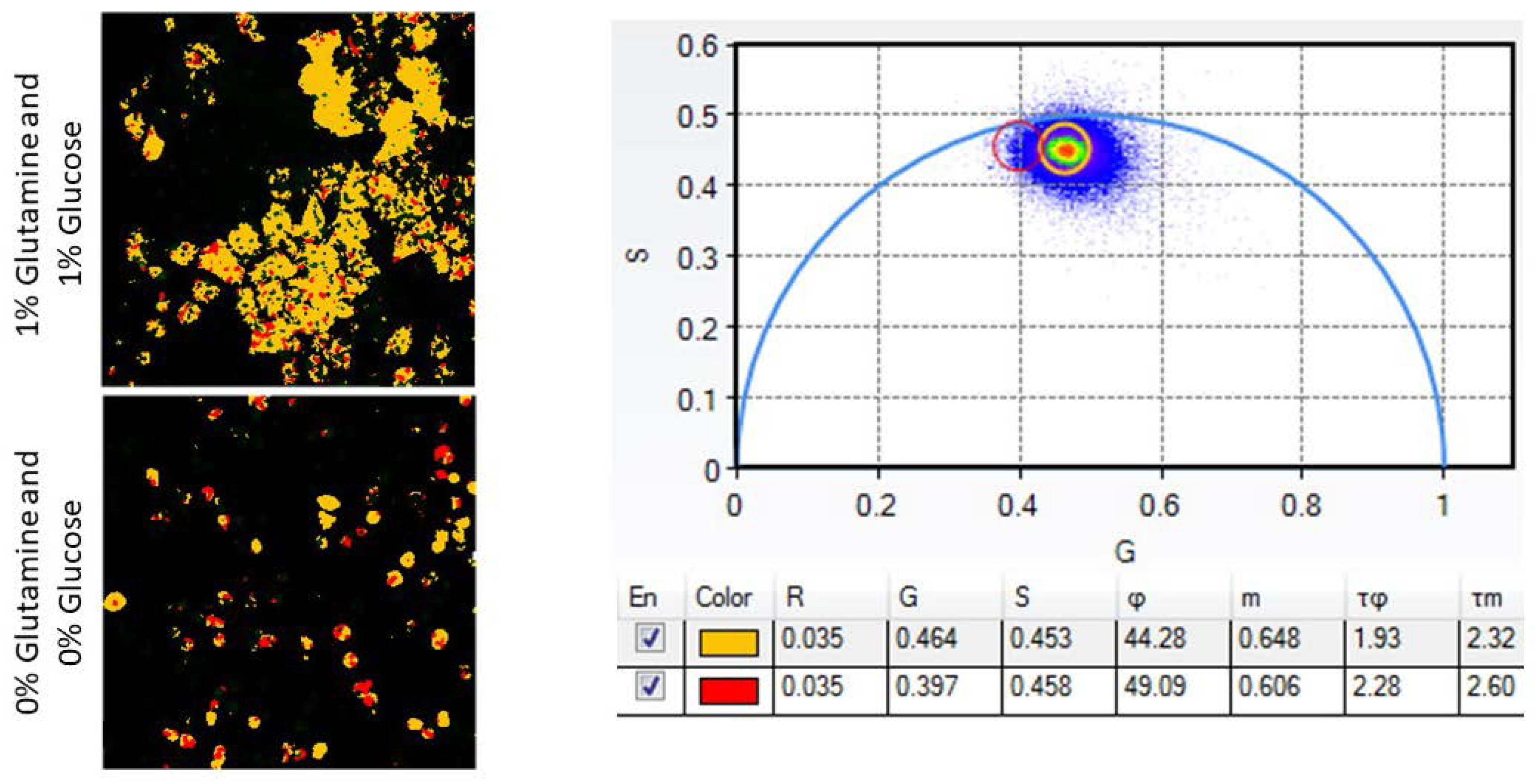