Effect of Notch and PARP Pathways’ Inhibition in Leukemic Cells

Differentiation of blood cells is one of the most complex processes in the body. It is regulated by the action of transcription factors in time and space which creates a specific signaling network. In the hematopoietic signaling system, Notch is one of the main regulators of lymphocyte development. The aim of this study was to get insight into the regulation of Notch signalization and the influence of poly(ADP-ribose)polymerase (PARP) activity on this process in three leukemia cell lines obtained from B and T cells. PARP1 is an enzyme involved in posttranslational protein modification and chromatin structure changes. B and T leukemia cells were treated with Notch and PARP inhibitors, alone or in combination, for a prolonged period. The cells did not show cell proliferation arrest or apoptosis. Analysis of gene and protein expression set involved in Notch and PARP pathways revealed increase in JAGGED1 expression after PARP1 inhibition in B cell lines and changes in Ikaros family members in both B and T cell lines after γ-secretase inhibition. These data indicate that Notch and PARP inhibition, although not inducing differentiation in leukemia cells, induce changes in signaling circuits and chromatin modelling factors. View Full-Text
Keywords: B and T leukemia cell line; Notch; PARP1; Ikaros; Jagged; gene expression B and T leukemia cell line; Notch; PARP1; Ikaros; Jagged; gene expression
►▼ Show Figures 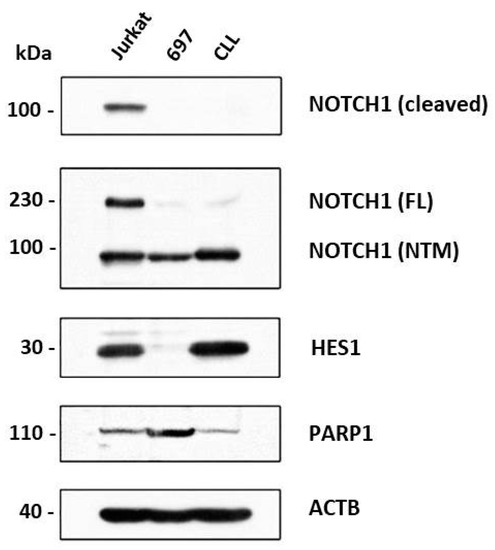