Metabolic Stress in the Immune Function of T Cells, Macrophages and Dendritic Cells

Sustained endoplasmic reticular stress (ERS) is implicated in aggressive metastasis of cancer cells and increased tumor cell proliferation. Cancer cells activate the unfolded protein response (UPR), which aids in cellular survival and adaptation to harsh conditions. Inhibition of apoptosis, in contrast, is a mechanism adopted by cancer cells with the help of the inhibitor of an apoptosis (IAP) class of proteins such as Survivin to evade cell death and gain a proliferative advantage. In this study, we aimed to reveal the interrelation between ERS and Survivin. We initially verified the expression of Survivin in Winnie (a mouse model of chronic ERS) colon tissues by using immunohistochemistry (IHC) and immunofluorescence (IF) in comparison with wild type Blk6 mice. Additionally, we isolated the goblet cells and determined the expression of Survivin by IF and protein validation. Tunicamycin was utilized at a concentration of 10 µg/mL to induce ERS in the LS174T cell line and the gene expression of the ERS markers was measured. This was followed by determination of inflammatory cytokines. Inhibition of ERS was carried out by 4Phenyl Butyric acid (4PBA) at a concentration of 10 mM to assess whether there was a reciprocation effect. The downstream cell death assays including caspase 3/7, Annexin V, and poly(ADP-ribose) polymerase (PARP) cleavage were evaluated in the presence of ERS and absence of ERS, which was followed by a proliferative assay (EdU click) with and without ERS. Correspondingly, we inhibited Survivin by YM155 at a concentration of 100 nM and observed the succeeding ERS markers and inflammatory markers. We also verified the caspase 3/7 assay. Our results demonstrate that ERS inhibition not only significantly reduced the UPR genes (Grp78, ATF6, PERK and XBP1) along with Survivin but also downregulated the inflammatory markers such as IL8, IL4, and IL6, which suggests a positive correlation between ERS and the inhibition of apoptosis. Furthermore, we provided evidence that ERS inhibition promoted apoptosis in LS174T cells and shortened the proliferation rate. Moreover, Survivin inhibition by YM155 led to a comparable effect as that of ERS inhibition, which includes attenuation of ERS genes and inflammatory markers as well as the promotion of programmed cell death via the caspase 3/7 pathway. Together, our results propose the interrelation between ERS and inhibition of apoptosis assigning a molecular and therapeutic target for cancer treatment. View Full-Text
Keywords: endoplasmic reticular stress; apoptosis; survivin; unfolded protein response; inhibition of apoptosis; proliferation; Winnie; LS174T; colon; colon cancer; 4PBA; tunicmycin endoplasmic reticular stress; apoptosis; survivin; unfolded protein response; inhibition of apoptosis; proliferation; Winnie; LS174T; colon; colon cancer; 4PBA; tunicmycin
►▼ Show Figures 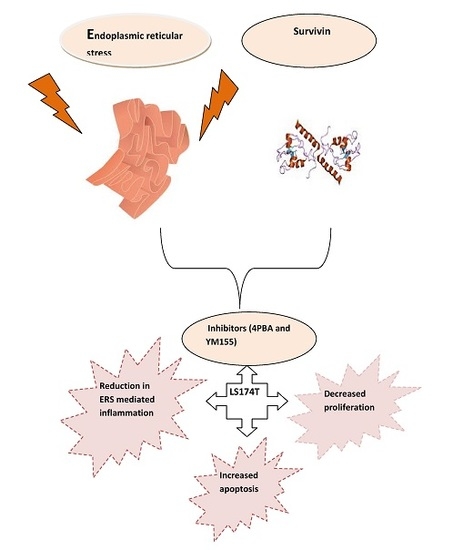