Raman Spectroscopy as a Neuromonitoring Tool in Traumatic Brain Injury: A Systematic Review and Clinical Perspectives
Previous Article in Journal

B cells express various ion channels, but the presence of voltage-gated sodium (NaV) channels has not been confirmed in the plasma membrane yet. In this study, we have identified several NaV channels, which are expressed in the human B cell membrane, by electrophysiological and molecular biology methods. The sensitivity of the detected sodium current to tetrodotoxin was between the values published for TTX-sensitive and TTX-insensitive channels, which suggests the co-existence of multiple NaV1 subtypes in the B cell membrane. This was confirmed by RT-qPCR results, which showed high expression of TTX-sensitive channels along with the lower expression of TTX-insensitive NaV1 channels. The biophysical characteristics of the currents also supported the expression of multiple NaV channels. In addition, we investigated the potential functional role of NaV channels by membrane potential measurements. Removal of Na+ from the extracellular solution caused a reversible hyperpolarization, supporting the role of NaV channels in shaping and maintaining the resting membrane potential. As this study was mainly limited to electrophysiological properties, we cannot exclude the possible non-canonical functions of these channels. This work concludes that the presence of voltage-gated sodium channels in the plasma membrane of human B cells should be recognized and accounted for in the future. View Full-Text
Keywords: B cell; lymphocytes; voltage-gated sodium channel; patch-clamp electrophysiology; tetrodotoxin B cell; lymphocytes; voltage-gated sodium channel; patch-clamp electrophysiology; tetrodotoxin
►▼ Show Figures 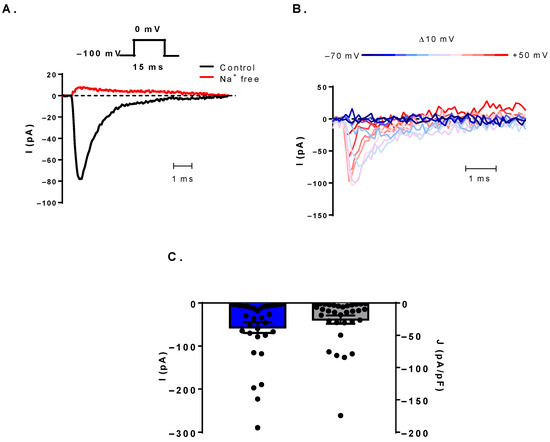