TDP-43 Cytoplasmic Translocation in the Skin Fibroblasts of ALS Patients

Diagnosis of ALS is based on clinical symptoms when motoneuron degeneration is significant. Therefore, new approaches for early diagnosis are needed. We aimed to assess if alterations in appearance and cellular localization of cutaneous TDP-43 may represent a biomarker for ALS. Skin biopsies from 64 subjects were analyzed: 44 ALS patients, 10 healthy controls (HC) and 10 neurological controls (NC) (Parkinson’s disease and multiple sclerosis). TDP-43 immunoreactivity in epidermis and dermis was analyzed, as well as the percentage of cells with TDP-43 cytoplasmic localization. We detected a higher amount of TDP-43 in epidermis (p < 0.001) and in both layers of dermis (p < 0.001), as well as a higher percentage of TDP-43 cytoplasmic positive cells (p < 0.001) in the ALS group compared to HC and NC groups. Dermal cells containing TDP-43 were fibroblasts as identified by co-labeling against vimentin. ROC analyses (AUC 0.867, p < 0.001; CI 95% 0.800–0.935) showed that detection of 24.1% cells with cytoplasmic TDP-43 positivity in the dermis had 85% sensitivity and 80% specificity for detecting ALS. We have identified significantly increased TDP-43 levels in epidermis and in the cytoplasm of dermal cells of ALS patients. Our findings provide support for the use of TDP-43 in skin biopsies as a potential biomarker. View Full-Text
Keywords: amyotrophic lateral sclerosis; dermis; skin biopsy; TDP-43; biomarker amyotrophic lateral sclerosis; dermis; skin biopsy; TDP-43; biomarker
►▼ Show Figures 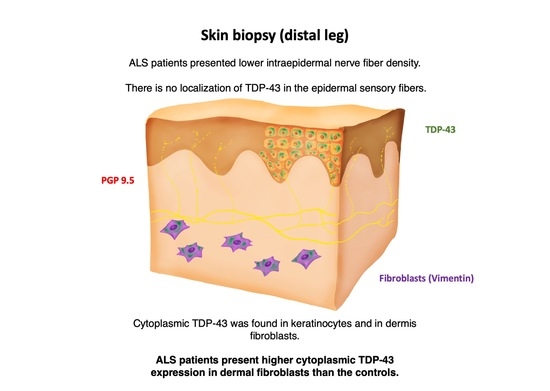