Impact of Airway Inflammation on the Efficacy of CFTR Modulators

Alzheimer’s disease (AD), the most common form of dementia, is characterized by amyloid-β (Aβ) accumulation, microglia-associated neuroinflammation, and synaptic loss. The detailed neuropathologic characteristics in early-stage AD, however, are largely unclear. We evaluated the pathologic brain alterations in young adult App knock-in model AppNL-G-F mice at 3 and 6 months of age, which corresponds to early-stage AD. At 3 months of age, microglia expression in the cortex and hippocampus was significantly decreased. By the age of 6 months, the number and function of the microglia increased, accompanied by progressive amyloid-β deposition, synaptic dysfunction, neuroinflammation, and dysregulation of β-catenin and NF-κB signaling pathways. The neuropathologic changes were more severe in female mice than in male mice. Oral administration of dioscin, a natural product, ameliorated the neuropathologic alterations in young AppNL-G-F mice. Our findings revealed microglia-based sex-differential neuropathologic changes in a mouse model of early-stage AD and therapeutic efficacy of dioscin on the brain lesions. Dioscin may represent a potential treatment for AD. View Full-Text
Keywords: Alzheimer’s disease; AppNL-G-F; dioscin; amyloid-β; synaptic dysfunction; microglia; neuroinflammation Alzheimer’s disease; AppNL-G-F; dioscin; amyloid-β; synaptic dysfunction; microglia; neuroinflammation
►▼ Show Figures 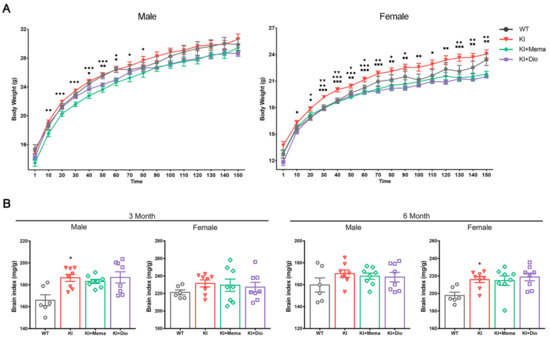