Soft tissue sarcomas are a large group of different tumor types both in humans and in animals. Among them, fibrosarcoma is the most frequent malignant mesenchymal tumoral form in cats, representing up to 28% of all cat skin tumors, while human fibrosarcoma, fortunately, only represents 5% of all sarcomas and 0.025% of the world-wide burden of tumors. This low incidence in humans leads to consideration of this group of tumoral diseases as rare, so therapeutic options are few due to the difficulty of starting clinical trials. In this context, the identification of research models for fibrosarcomas could be of great interest to deepen knowledge in this field and recognize new or possible biological pathways involved in tumor progression and metastasis. Angiogenesis is considered a fundamental scattering cause of tumor aggressiveness and progression in all forms of cancer, but only a few research parameters were developed and reported to express them quantitatively and qualitatively. The role in angiogenesis of microenvironmental stromal cells, such as fibroblasts, lymphocytes, mast cells, and macrophages, was largely demonstrated since this topic was first approached, while quantification of new vessels and their blood capacity in tumoral area is a relatively recent approach that could be well developed thanks to expertise in immunohistochemistry and image analysis. In this paper, a crossing study evaluating microvascular density (MVD), endothelial area (EA), and Ki-67 proliferative index was reported for a series of formalin-fixed and paraffin-embedded tissue samples from 99 cat patients, affected by cat post-injection fibrosarcoma, by using a till ×400 magnification light microscopy. We aim to demonstrate that cat pets may be considered a useful animal model for better studying the correspondent human diseases and we report, for the first time to our knowledge, experimental data in terms of correlation among MVD, EA, and Ki-67 strictly involved in aggressiveness and tumoral progression.
Keywords: angiogenesis; cat fibrosarcoma; endothelial area; immunohistochemistry; Ki-67 proliferation index; microvascular density angiogenesis; cat fibrosarcoma; endothelial area; immunohistochemistry; Ki-67 proliferation index; microvascular density

Pet animals, cats and dogs, have been largely used as models for oncological research since the spread of the “one medicine and pathology approach” to cancer [1,2]. With special regard to soft tissue tumors, cat post-injection fibrosarcoma (CPIFI) is certainly a useful model to deepen knowledge about sarcomas [3,4,5,6]. From a clinical point of view, fibrosarcoma (FI), which originates from fibroblasts, is the most common malignant mesenchymal tumor in cats, representing 14% to 28% of all cat skin tumors, with an onset average age of 12 years [7]. Subcutaneous FIs frequently arise on the trunk and distal parts of the limbs, while dermal FIs hit the pinnae and digits in most cases [8], but these tumors often recur and metastasize to distant organs, inducing death of the animal [9]. To perform their metastatic ability, sarcoma cells need to penetrate blood vessels and, in turn, proliferate in the chosen metastatic site. An increased microvascular bed, depicted by the angiogenesis processes, facilitates the metastatic spread [10]. With special regard to CPIFI, its sprouting at the vaccination site was previously reported [8,11]. From a pathogenetic point of view, literature data correlate stromal infiltrate cells to CFI development [12,13], underlining that microenvironmental stromal cells, such as fibroblasts, lymphocytes, mast cells, and macrophages, sustain angiogenesis in several human and animal malignancies [14,15,16,17,18,19,20,21,22,23,24]. Due to its origin from fibroblasts, CPIFI has a rich stromal cell infiltrate which is supposed to be responsible for the pathogenesis of the tumor [25]. It is also noteworthy that the number of tumor cell mitoses per field was considered a parameter of the biological aggressiveness of sarcoma, as for other solid tumors [26,27]. A higher Ki-67 proliferative index, being the expression of CPIFI malignancy and aggressiveness, should be accompanied by a higher neovascularization process [16,28]. For the first time in the literature, Couto et al. evaluated the correlation between the proliferative activity, evaluated as Ki-67 positive tumoral fibroblastic cells, and angiogenesis in terms of microvascular density (MVD) in 60 CPIFIs in 2002. However, no data are published regarding the correlation between the proliferative activity and angiogenesis both in terms of microvascular density (MVD) and endothelial area (EA) as pathologic cellular pathways in CPIFI development [18,29,30]. MVD represents the number of immunostained old and new vessels, while EA is the immunostained vascular area in a microscopic field that is the expression of vessels’ blood capacity and diameters. In combination, the two research parameters fuse different quantitative aspects of angiogenesis. The main endpoint of this research was to explore this; to this aim, we studied a series of 99 CPIFIs in terms of proliferative index of tumoral fibroblastic cells and angiogenesis using immunohistochemistry and image analysis systems. Interestingly, thanks to its higher incidence compared to human FI, although its development is scattered by an inflammatory reaction to the injection site, CPIFI might be considered a spontaneous model to evaluate angiogenesis and antiangiogenesis pharmacological strategy, which could be translated to humans.

A series of formalin-fixed and paraffin-embedded tissue samples obtained from 99 cases of CPIFI were employed. Patients were observed at the Department of Veterinary Medicine of Bari University and, after complete clinical examination, biopsy for each cat was performed. In the next step, the cats with confirmed histological diagnosis of FI were surgically treated [31]. Table 1 shows the patients’ characteristics.

Histological diagnosis was performed on serial slides for each tumor sample, stained with hematoxylin–eosin method (Figure 1A–C). According to Couto’s classification, the cases were defined as follows: 32 (32.3%) were G1, corresponding to well differentiated, 38 (38.4%) were G2, corresponding to intermediately differentiated, and 29 (29.3%) were G3, corresponding to poorly differentiated CPIFIs [26,27]. For the evaluation of MVD, EA, and Ki-67 proliferative index, a three-layer biotin–avidin–peroxidase system, as previously described, was adopted [16,18,28]. Briefly, 5 µm thin serial sections of formalin-fixed and paraffin-embedded were cut for each tissues sample. For antigen retrieval, the obtained slides were processed with a microwave oven at 500 watts for 10 min; then, the endogenous peroxidase enzyme was inhibited with a 3% hydrogen peroxide solution. Soon after, the slides were incubated with the following primary antibodies:
(a) The rabbit polyclonal anti-factor VIII-related antigen (FVIII-RA) antibody (dilution, 1:50; Dako, Glostrup, Denmark) for 1h at room temperature;
(b) The MIB-1 antibody to Ki-67 nuclear proliferation antigen (dilution, 1:100; MIB-1; Immunotech, Inc., Marseilles, France) for 1 h at room temperature.
Immunoreactivity was evidenced by employing a biotinylated secondary antibody, the avidin–biotin–peroxidase complex (LPS, K0640, Dako, Glostrup, Denmark), and the chromogen 3-amino-9-ethyl carbazole (Dako, Glostrup, Denmark). Nuclear counterstaining was performed with Gill’s haematoxylin (Polysciences, Warrington, PA, USA) for each tissue sample [32]. An additional slide from each cat without the primary anti-factor VIII antibody was used as negative control. For the Ki-67 proliferative index, sections from normal feline intestines were used for each experiment and the corresponding epithelium was considered negative if it lacked immunostaining after utilization of the MIB-1 primary antibody.
Feline granulation tissue specimens were used as a positive control for blood vessels. Regarding the MIB-1 antibody, positive controls consisted of normal feline small intestines, because intestinal crypts are considered sites of proliferation.

MVD was identified according to the modified Weidner’s method [33]. Weidner’s method provides that any brown-staining endothelial cell or endothelial-cell cluster clearly separated from adjacent microvessels, tumor cells, and other connective-tissue elements are considered single, countable microvessels. Vessel lumens, although usually present, are not necessary for a structure to be defined as a microvessel, and red cells are not used to define a vessel lumen. Each count is expressed as the highest number of microvessels identified within any 200× or 400× field. All counts are performed by two investigators using a double-headed light microscope simultaneously; both operators agreed on what constituted a single microvessel before any vessel was included in the count [34]. In our study, we employed a modified technique; the slides were morphometrically evaluated independently by two investigators with the help of an image analysis system (Quantimet 500 Leica). To be specific, first of all, we selected vascular “hot spots” for each tumor grade at low magnification ×100 at light microscopy (Leica DM 4000). Then, ten fields were randomly selected at ×400 magnification in a 0.19 mm2 area (Figure 2A–C).
Angiogenesis was also evaluated in terms of EA in a semiautomated approach, delimiting the perimeter of the single vessel and then calculating the corresponding area by the software of the image analysis system, both for each vessel and then for all vessels in the observed ×400 magnification in a 0.19 mm2 area (Figure 3A–C) [16,28,32,33,34,35,36,37,38].
In the serial section, Ki-67 proliferative index evaluation was determined in the same area of MVD, and only specific nuclear staining was considered. The number of MIB-1 positively stained nuclei tumor cells was counted at ×400 magnification in a 0.19 mm2 area (Figure 4A–C). The fraction of Ki-67 positive cells was calculated as the ratio of positively stained tumor cells and all tumor cells observed in the analyzed microscopic field [18,29,30].
All the above tissue parameters were independently evaluated by two operators (authors NZ and AZ, veterinary and human pathologists, respectively), with a correlation coefficient of ≥90%.

Mean value ± standard deviations (S.D.) was evaluated for MVD, EA, Ki-67, expression in G1, G2 and G3 CPIFI subgroups. The significance of differences in terms of MVD, EA, and Ki-67 means between G1 versus (vs.) G2, G2 vs. G3, and G3 vs. G1 tumor groups was performed by one-way ANOVA test. Correlations among MVD, EA, and Ki-67 were calculated using Pearson’s (r) analysis. All statistical analyses were performed with the SPSS statistical software package (SPSS, Inc., Chicago, IL, USA).

This is a retrospective investigation on animal tissue samples by cats hospitalized for diagnosis, which underwent neither treatments nor procedures different from routine practice. Therefore, for our scientific purpose, no ethical statement was needed.

Informed consent was obtained from all the patients’ owners involved in the study.

We would like to thank Lo Presti Giuseppe for the excellent technical assistance.

The authors have no relevant affiliation or financial involvement with any organization or entity with a financial interest or financial conflict with the subject matter or materials discussed in the manuscript. 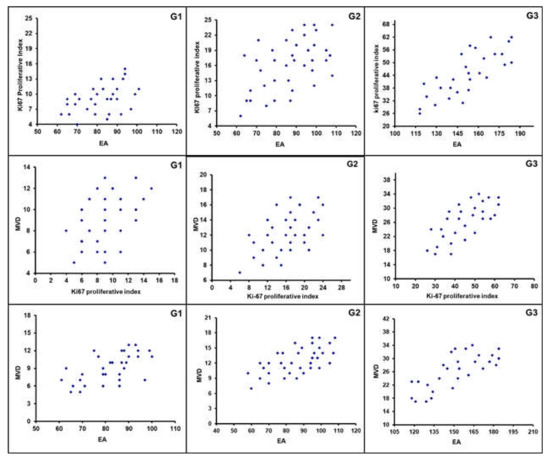 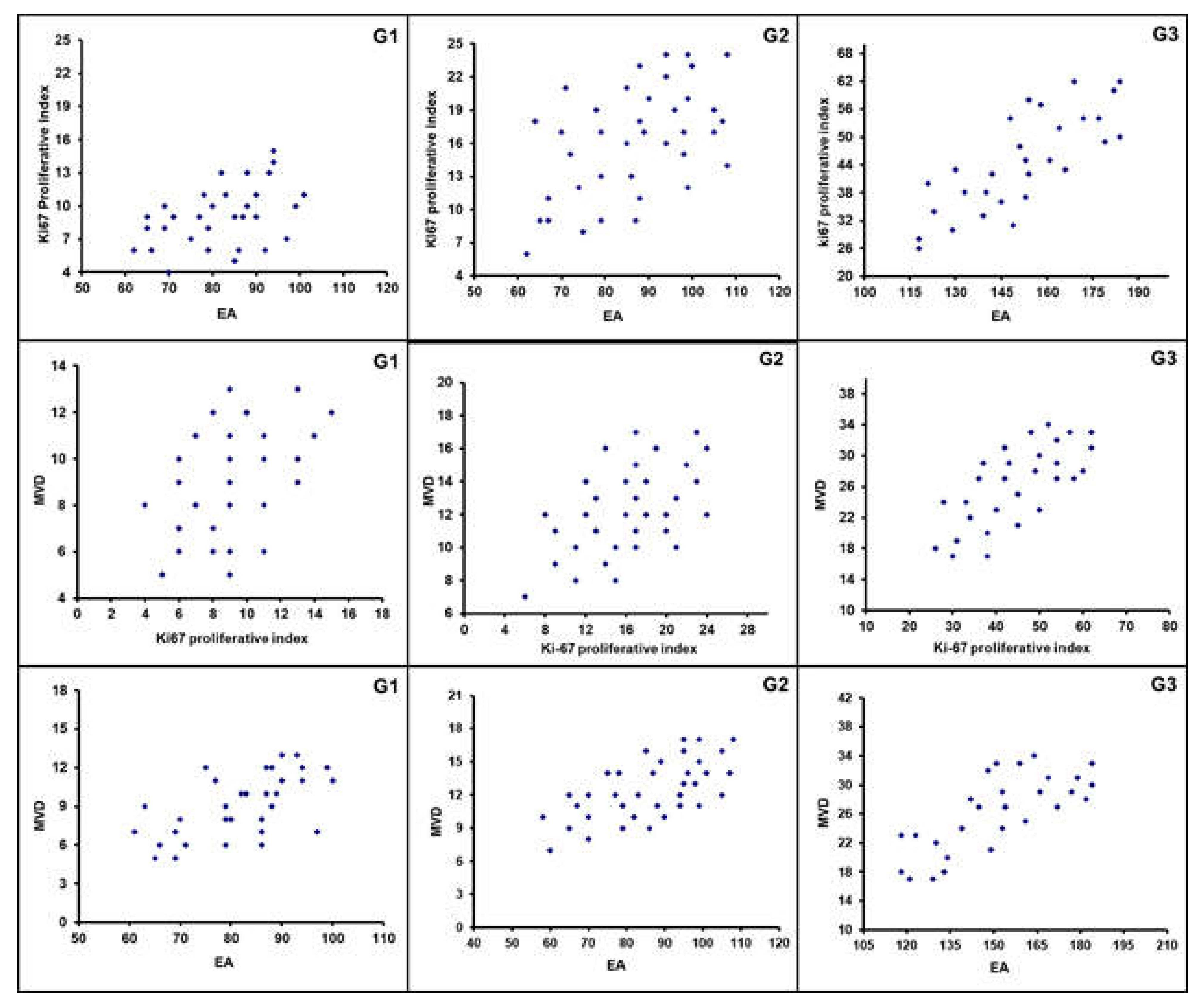