Back to the Future: Revisiting the Application of an Enzyme Kinetic Equation to Maize Development Nearly Four Decades Later

The maize field data are for the development rate from seedling emergence to silking and the development rate from silking to physiological maturity [2]. It was assumed that the temperature-dependent development rate of seedling emergence to silking and silking to physiological maturity was the same in any given variety based on previous experience of Tonnang et al. [2]. This is supported by the results of Kiniry and Keener [13]. In that study, assuming 4 days from planting to seedling emergence under optimum temperatures, the heat units from silking to physiological maturity for three hybrids were 53, 49, and 49% of the heat units from seedling emergence to physiological maturity. Thus, the temperature-dependent development rates from seedling emergence to silking were similar to the temperature-dependent development rates from silking to physiological maturity.
The data of Tonnang et al. [2] were for 9 medium-maturity open pollinated varieties that were described in Makumbi et al. [18]. These varieties are herbicide-resistant and show some resistance to Striga hermonthica (Del.) Benth. and Striga asiatica (L.) Kuntze that can severely affect some maize in sub-Saharan Africa. All plots were irrigated as needed to prevent drought stress.
The Poikilotherm equation, fitted with Lehenbauer’s maize growth data, was adjusted using the relative development rates of Tonnang’s first variety, VE 201. As discussed below and shown in Figure 1, the original parameters from Lehenbauer’s growth data produced a curve that showed consistent bias at low and high temperatures. We addressed this in two steps: First, we fit the height of the curve to match the maximum development rate measured. Secondly, we adjusted the lateral scale (temperature) by visually fitting a factor affecting temperature. The temperature for the curve fitting was the measured temperature minus 8 °C, as described above. Thus, the temperature above the 8 °C base was divided by this factor. The use of 8 °C as a base was simply to be consistent with earlier work. This shifted the curve to the left, without changing the actual shape of the curve. It is worth noting that the original Sharpe and DeMichele publication contained an error in the final equation (Equation (17) in their publication). The second in the denominator should have had “H” as the subscript to denote that it was for high temperature rather than the “L” for low temperature.
Similarly, for the “heat stress” equation, the base temperature was assumed to be 8 °C. The development rate was linear from 8 °C to the optimum, which was the highest data point measured for variety VE 201. The development rate then decreased linearly from this optimum point through the one high temperature data point reported. In addition, the “heat stress” equation was fitted to their first variety data, using the established base temperature of 8 °C and the maximum measured development rate as the optimum rate. The linear decrease for above-optimum values was fitted to this maximum and the one datapoint at high temperatures. Finally, individual regression lines were fitted for each variety for all the data except the highest temperature data point. The base temperatures were derived for each and the regressions were used as another method of calculating development rate. For temperatures above the optimum, the line forced through the two highest temperature data points was used.
Both equations, derived for the first variety, were then applied without refitting to the data for the rest of the maize varieties presented in Tonnang et al. [2]. The root-mean-square error (RMSE) was used as a measure of the goodness of fit of each model for each maize variety [19,20]. where n is the number of data points, K is the number of model parameters, and Yi and Ŷi are the observed and predicted values, respectively.
The best-fitted model is often selected by comparing Akaike’s Information Criterion (AIC). However, as the sample size is small (n/K < 40), the small-sample (second-order) bias correction term, denoted by AICc, was calculated for each model within each maize variety [21,22]. and
AICc differences, Δj_AICc, were also used to determine the level of support for each model [22]. The AICc with the minimum value, denoted by AICc_min, refers to the best model. The Δj_AICc for the jth model is the difference between the AICcj and AICc_min, shown as follows:
There are some rough rules of thumb that are particularly useful for the nested model [22]. If the Δj_AICc is
The Akaike weights, denoted by wj, were used as a measure of the strength of evidence for each model; the Akaike weights count the probability that model j is the best among the set of models [22]. They are the ratio of each model‘s AICc differences relative to the sum of the AICc differences for all models, shown as follows:
The values of RMSE, AICc, Δj_AICc, and wj for the Briere model were obtained and derived from the values reported in the original paper [2].

Funding for this research was provided by the USDA ARS Grassland, Soil and Water Res. Lab. USDA is an equal opportunities provider and employer. This work was also supported in part by an appointment to the Agricultural Research Service administered by the Oak Ridge Institute for Science and Education through interagency agreement between the U.S. Department of Energy (DOE) and the U.S. Department of Agriculture (USDA), Agricultural Research Service Agreement #60-3098-5-002. 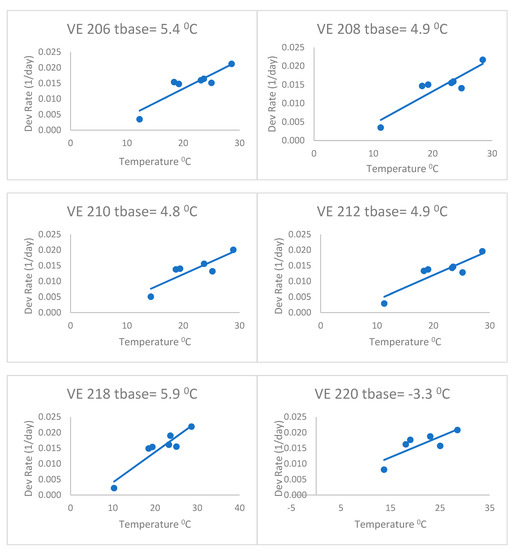