Soil Quality of Abandoned Agricultural Terraces Managed with Prescribed Fires and Livestock in the Municipality of Capafonts, Catalonia, Spain (2000–2017)
Next Article in Special Issue

Light, temperature, humidity, concentration of CO2, and nutrition supply are vital factors that influence photosynthesis of plants. Light intensity, quality, photoperiod, and direction influence plant growth, development, photomorphogenesis, and anatomical structure as energy sources and regulatory signals [1,2,3]. Previous studies have proven that light intensity can adjust formation of the chloroplast protein complex, electron transport, and quantum yield between photosystems I (PSI) and II (PSII) [4,5].
Grafting as an efficient technique can be applied to overcome the obstacles of continuous cropping and improve yield, quality, and stress resistance in various plant species including fruit trees, vegetables, and ornamental flowers [6]. In addition to rootstock, affinity of the scion, and grafted methods, the surviving rates, formation of new vascular bundles, and biological properties of grafted seedlings are also related to environmental conditions and management in healing and acclimatization processes [7]. Light-emitting diodes (LEDs) are widely used in facility horticulture as an artificial light source for production of high-quality seedlings. LEDs have shown promising foreground applications because of their advantages of being light-weight, having a small volume, having a specific wavelength, they are easy to integrate, and they have low heat dissipation. Previous studies have shown that the LEDs play a vital role in toughening grafted seedlings in healing and acclimatization processes [8,9].
Generally, stocky plug seedlings are preferred by crop growers for the convenience of transportation and to insure a higher survival ratio and enhanced development after transplanting. Each country has different standards for evaluating the quality of seedlings. In South Korea, it is generally agreed that high-quality seedlings are those without overgrowth, with short and not lodging stems and leaves, and with well-developed roots that hold the medium in the plug tray. Light intensity has been proven to affect plant height and biomass growth [10,11]. Leaf area also changes with light intensity as plants use leaves to absorb light energy [12,13]. Moreover, higher light intensities may result in more root biomass so the absorption of water and mineral elements could be promoted [14]. Therefore, seedlings with good quality could be obtained by supplementing them with optimal light intensity.
This study was carried out aimed at finding an optimal light intensity to improve the quality of two kinds of grafted tomato seedlings. After grafting, well-healed grafted seedlings were moved to and cultivated for an additional 10 days in a glasshouse, which had natural lighting and supplemental lighting. The supplementary light intensities were set at 50, 100, or 150 μmol·m−2·s−1 photosynthetic photon flux density (PPFD) supplied from mixed LEDs (W1R2B1) to further improve the quality of seedlings. After treatment, expressions of two photosynthesis-related genes (PsaA and PsbA) and the corresponding proteins were analyzed to evaluate the capacity of photosynthesis.

Two cultivars of tomato (Solanum lycopersicum L.) ‘Super Sunload (SS)’ and ‘Super Dotaerang (SD)’ were selected as the scions and tomato ‘B-Blocking’ as a common rootstock. Cultivars ‘SS’ and ‘SD’, widely used for grafting, were purchased from Sakata Seed Korea Co., Ltd. (Seoul, Korea) and Koregon Co., Ltd. (Anseong, Korea), respectively. The ‘SS’ has high fruit firmness with an average fruit weight of 220–240 g. The primary advantages of ‘SS’ are a low ratio of fruit deformity and resistance to high temperatures. The ‘SD’ is a cultivar with disease resistance and has a high sugar content, firm flesh, and a low deformity ratio. The seeds of these cultivars were sown into 40 square cell plug trays at the same time they were filled with commercial growing medium (Super Mix, NongKyung Co., Jincheon, Korea). The scion and rootstock were cleft-grafted at 20 d after sowing when both scion cultivars had two same sizes of compound leaves. After grafting, the grafted seedlings were immediately transported to a healing chamber, which had a temperature of 23 °C and relative humidity of 95% to 100% throughout the healing period. Five days later, the well-healed grafted seedlings were moved from the healing chamber to the greenhouse for light treatment when the average plant height was about 8 ± 0.7 cm and each seedling had two and a half true leaves.

Mixed LEDs (W1R2B1) (Custom made, Sung Kwang LED Co., Ltd., Incheon, Korea), which were selected as the best artificial light source in precedent research [15], were used as the sole light source. The grafted seedlings were cultivated for an additional 10 d in a glasshouse with a daily light integral (DLI) of 11.59 mol·m−2·d−1 from the sun and supplemental lighting for 16 h/d. The supplementary light intensities were set at 50, 100, or 150 μmol·m−2·s−1 PPFD (henceforth shortened as 50, 100, and 150). The DLIs of the three supplementary light treatments were 2.88, 5.76, and 8.64 mol·m−2·d−1, respectively. The distance between the LEDs and seedlings was 50 cm. Light intensity was measured at the horizontal position at the seedling stem. The culture environment had 30/25 °C day/night temperatures, 70% ± 5% relative humidity (RH), with a natural photoperiod of 14 h. A portable photo/radiometer (Type specification: HD-2102.2, Delta, OHM, Padova, Italy) was used to measure the photon flux density. Different light intensities were controlled by adjustable electric currents.

Mature and expanded leaves were selected for the measurement of stomatal conductance. Measurements were carried out during the day (9:00–10:00) on a porometer (Type specification: Sc-1 Porometer, Decagon Devices Inc., Pullman, WA, USA).

After supplemental lighting treatments for 10 d, this study measured the following parameters: lengths of scion and root, diameters of scions, number of leaves, leaf length, leaf width, leaf area and thickness, chlorophyll (SPAD), fresh weight of root, dry weight of root, specific weight of leaf, and dry weight to height ratio of scion.
The experiment was carried out in three replicates with a design of randomized complete block, using 9 seedlings in each replication. Locations of replications were randomly mixed to eliminate position effect within a controlled environment. One-way analysis of variance ANOVA by SAS program Statistical Analysis System (V.9.1, Cary, NC, USA), was applied to statistically analyze the collected data. Duncan’s multiple range test was adopted to test significant differences between different means.

3.1. Growth and Development of Tomato Seedlings as Affected by Supplemental Lighting Treatment in the Glasshouse

The following are available online at https://www.mdpi.com/2073-4395/9/6/339/s1, Table S1: Sequences of Primers used in the expressions of photosynthesis-related genes.

This research was funded by Korea Institute of Planning and Evaluation for Technology in Food, Agriculture, and Forestry, Project No.319008-01. H.W., J.Z., and J.H. were supported by a scholarship from the BK21 Plus Program, Ministry of Education, Republic of Korea.

This study was carried out with support from the Korea Institute of Planning and Evaluation for Technology in Food, Agriculture, and Forestry (Project No.319008-01). H.W., J.Z., and J.H. were supported by a scholarship from the BK21 Plus Program, Ministry of Education, Republic of Korea. 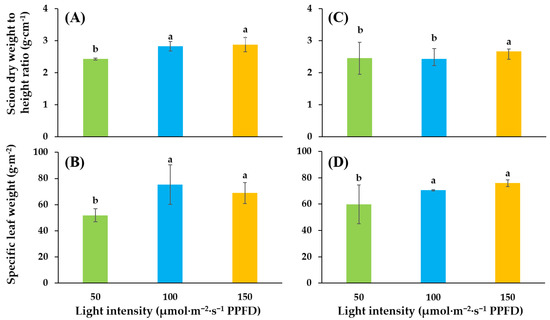 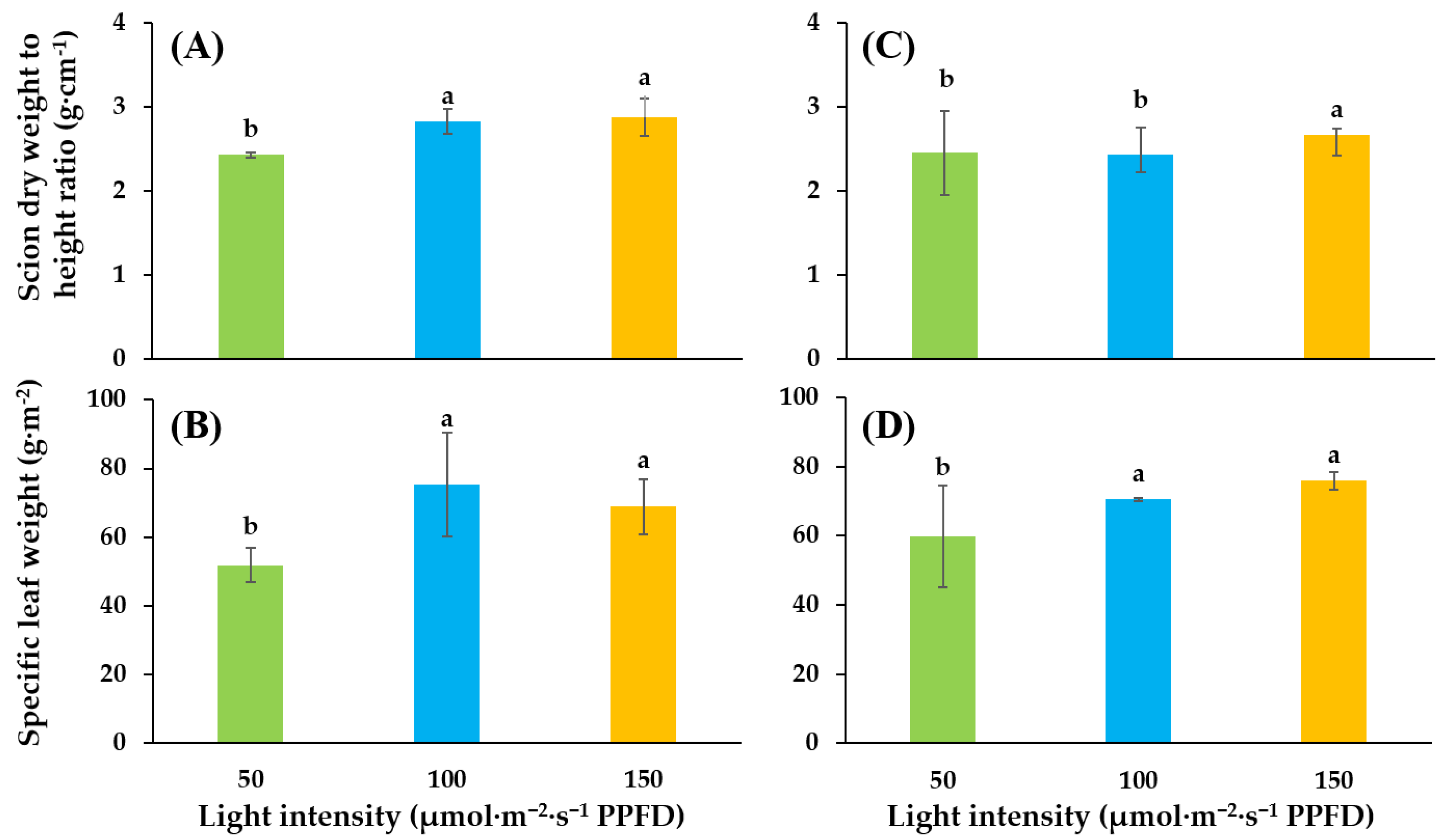 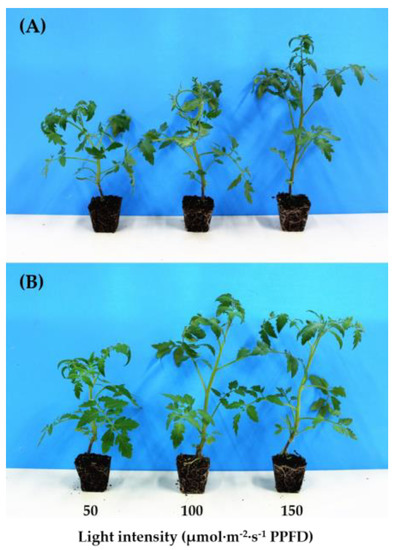 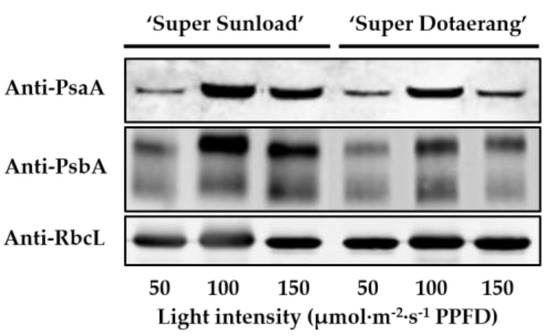