The hydrangea (Hydrangea macrophylla (Thunb). Ser.) is an ornamental species with great market potential. It is known for its ability to change the colour of its inflorescence, according to the pH of the culture substrate. The molecular mechanisms that underlie these changes are still unclear. It is known that epigenetic mechanisms, such as DNA methylation, play an important role in genetic expression, so they could be responsible for this phenomenon in hydrangea. In the present study, the molecular markers ISSR (Inter Simple Sequence Repeat) and MSAP (Methyl-Sensitive Amplification Polymorphism) were used to detect molecular changes in the genome of hydrangea plants that were cultivated under different pH levels to modify the colour of the sepals. The results showed a correspondence between the methylation signal measured with MSAP and amplification ISSR patterns when compared before and after the modification of pH culture substrates. These results suggest that DNA methylation might be involved as a molecular mechanism underlying the colour change of hydrangea sepals in response to a differential pH in the substrate. In addition, the results pave the way to study the relationship between DNA methylation and ISSR marker profiles. View Full-Text
Keywords: Hydrangea; colour of sepals; pH; DNA methylation; MSAP; ISSR Hydrangea; colour of sepals; pH; DNA methylation; MSAP; ISSR
►▼ Show Figures 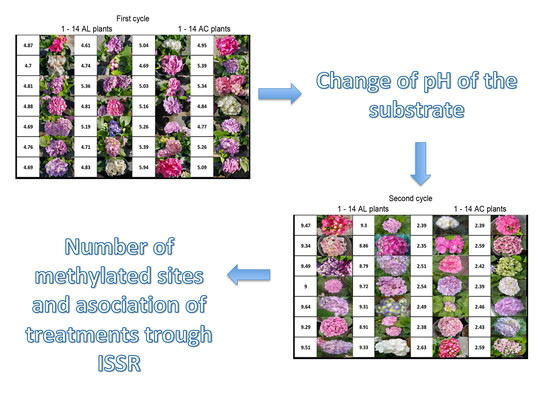