Phosphate Uptake is Correlated with the Root Length of Celery Plants Following the Association between Arbuscular Mycorrhizal Fungi, Pseudomonas sp. and Biochar with Different Phosphate Fertilization Levels
Next Article in Special Issue

Rice (Oryza sativa L.) contains many high-value nutritional compounds, including nutraceutical lipid compounds that offer health benefits. An understanding of the genetic variability in the lipid contents of different rice germplasms is necessary to support breeding programs. The goals of this study were: i) to investigate varietal differences in levels of the nutraceutical lipid α-tocopherol, γ-oryzanol, campesterol, β-sitosterol, octacosanol, and squalene and ii) to identify clusters of rice germplasms based on their lipid contents. Eighty-three indica rice subspecies were evaluated using a randomized complete block design with three replications. Research was conducted in Thailand during the 2016 rice-growing season. Significant differences were found among genotypes across all traits. The largest variation was found for β-sitosterol, followed by campesterol, octacosanol, and α-tocopherol. Variation in squalene content was small. Four principal components were found that accounted for 93.47% of overall variability. β-sitosterol, campesterol, and squalene were the principal discriminatory constituents. No significant correlation was found between color parameters and levels of these compounds, suggesting that former are of little use as an indirect marker for selection of fat-soluble nutraceuticals. Cluster analysis sorted the germplasm into nine clusters, based on their nutraceutical lipid content. TU-010, TU-027, TU-093, and TU-244 genotypes had the highest levels, making them a potentially useful genetic resource in breeding programs for nutraceutically-improved rice. The findings of this study can support the introduction of novel rice varieties with high added-value bioactive properties. View Full-Text
Keywords: landrace rice; fat-soluble nutraceuticals; β-sitosterol; genetic variability; cluster analysis landrace rice; fat-soluble nutraceuticals; β-sitosterol; genetic variability; cluster analysis
►▼ Show Figures 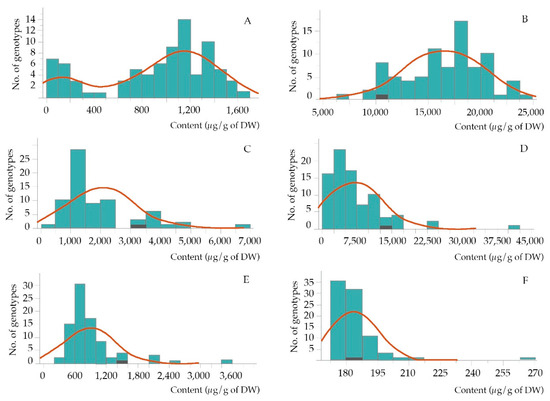