Study of the Utilisation of Almond Residues for Low-Cost Panels

Biological nitrogen fixation and plant hormone synthesis promoted by Azospirillum spp. bacteria play a role in enhancing crop productivity and reducing losses. This may constitute a strategy to enhance crop productivity and reducing losses, thereby increasing nitrogen fertilization efficiency. This research aimed to evaluate the effects of Azospirillum brasilense Ab-V5 and Ab-V6 strain inoculation and nitrogen fertilization on the agronomic characteristics and productivity of two maize hybrids (Zea mays L.) AS 1572 and AG 9030. Experiments were carried out at Santa Maria, RS, Brazil in the 2013/2014 and 2014/2015 growing seasons using a 2 × 2 × 5 factorial arrangement to distribute two maize hybrids, inoculated, or not, with Azospirillum brasilense, and five nitrogen doses (0, 60, 120, 240, and 480 kg ha−1). Kernel yield, mass, and dimensions, as well as kernel number on the cobs, stalk diameter, plant height, ear insertion height, prolificacy, nitrogen use efficiency (NUE), and their correlations were measured. Compared to uninoculated plants, higher kernel yield (p < 0.05) was observed for AS 1572 hybrid when inoculated with A. brasilense, with an increase of 0.978 Mg ha−1 or 10.95%. This effect was primarily due to the higher NUE rate and the increase (p < 0.05) in the number of kernels per cob. The AG 9030 hybrid showed no response to inoculation. A. brasilense inoculation increased the NUE rate of the AS 1572 hybrid in the condition N zero dose at N 60 kg ha−1 dose. Nitrogen fertilization increased crop productivity, notably by raising kernel mass and other productivity components, but reduced the NUE rate. The maximum technical efficiency obtained for the AS 1572 hybrid was of 10.705 Mg ha−1 with a N dose of 342 kg ha−1, whereas the AG 9030 hybrid produced a maximum grain yield of 10.089 Mg ha−1 with a dose of 350 kg ha−1 of N. We conclude that the inoculation with A. brasilense increases NUE, maize grain yield, and agronomic characteristic in the AS 1572 hybrid. View Full-Text
Keywords: diazotrophic bacteria; biological fixation of nitrogen; growth-promoting bacteria; phytohormones; Zea mays diazotrophic bacteria; biological fixation of nitrogen; growth-promoting bacteria; phytohormones; Zea mays
►▼ Show Figures 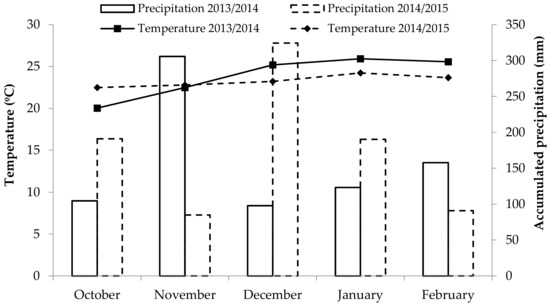