A field experiment was conducted on an upland field converted from an abandoned paddy field during summer in 2015 and 2016 at Tottori, Japan (35°29′15″ N, 134°07′47″ E). Four different adjacent fields A, B, C, and D with sesame cropping histories of 0–3 continuous monocropping years, respectively, were set up (Figure 1).
Briefly, prior to the start of this experiment, fields B, C, and D had been under continuous monocropping of sesame; field B had previously been cropped with sesame for one season (1 year), field C had been cropped for two consecutive seasons (2 years), and field D had been cropped for three consecutive seasons (3 years). Field A was a freshly established sesame field added at the start of the experiment in 2015. In this study, sesame was cultivated on these four fields, A, B, C, and D, for two consecutive years, 2015 and 2016, therein referred to as continuously monocropped sesame fields. The same agronomic practices of sesame were followed throughout the previous years of sesame cultivation before the start of this experiment. The soil chemical properties of the four continuously monocropped fields before start of the experiment in 2015 were analysed and are shown in Table 1.
The meteorological data of the experimental site in 2015 and 2016 included the mean monthly temperature, monthly rainfall, average seasonal temperature, and rainfall as shown in Table 2. During the two consecutive years, compared with year 2015, year 2016 showed markedly higher temperature and rainfall.

The experimental fields A, B, C, and D were ploughed to fine tilth and received nitrogen–phosphorous–potassium–dolomite basal fertilizer application as 70 kg ha−1 N, 105 kg ha−1 P2O5, 70 kg ha−1 K2O, and 1000 kg ha−1 dolomite (total alkali 53%, CaO 39.1%, and MgO 10%) as the recommended agronomic practice of sesame in the region. The N–P–K fertilizer was supplied in the form of cyclo-diurea (CDU) compound fertilizer (15%:15%:15%) and triple superphosphate for phosphorous (34%). This basal inorganic fertilizer together with dolomite was applied in every sowing season even before start of this experiment. The cultivation was carried out on raised ridges 75 cm wide separated by 40 cm onto which double rows of sesame at spacing of 45 cm × 15 cm were planted (115,942 plants ha−1). Each ridge was covered with black plastic mulch to reduce weeds and to maintain soil moisture. Five sesame seeds were sown per hole and later thinned to one plant after one month (first thinning was done after 2 weeks from sowing). In 2015, sesame was sown on 1 July 2015 and harvested on 28 September 2015 (89 days after sowing), while in 2016, sowing was done on 7 July 2016 and harvesting was on the 27 September 2016 (83 days after sowing).

At harvest time, 10 randomly selected plants from each plot in three replications were cut and capsules were tied in vinyl bags and allowed to dry in the greenhouse after which threshing was done and weight of the seeds were determined for yield analysis together with the weight of 1000 seeds.

Total fatty acids and each fatty acid content were determined by using a total fat determination unit (Model B-815/B-820 Buchi, Flawil, Switzerland) [19]. Briefly, 6.0 g of sesame seeds harvested from 10 plants per replicates from each continuous monocropping field was milled in a blender in three replicates; 2.5 g of milled samples was added into the solvent vessel (glass boiling container). Then, 45 mL of n-butanol and 7 granules of potassium hydroxide (for saponification) were added, 0.26 g of tridecanoic acid C13 was added as internal standard, and one spatula of ascorbic acid (about 0.2 g) was added to prevent oxidation in the extraction vessel. Extraction and simultaneous saponification of the samples were carried out on extraction unit (Buchi, Flawil, Switzerland) at boiling temperature for 30 min. Then, 40 mL of sodium dihydrogen formic acid mixture was added to convert the potassium salts and fatty acids into free fatty acids, and the mixture was stirred for 3 min. The vessels were later removed from extraction unit and allowed to cool, resulting into a two-phase system with an organic phase containing fatty acids in the upper phase/layer which was separated; 3 mL of the top layer (upper phase) was transferred using a micropipette into a 3-mL vial. The total fatty acid content and composition were then determined by gas chromatography (Model B-820, Buchi, Flawil, Switzerland) using hydrogen carrier gas at a pressure of 225 kPa and mixture gas pressure of 48 kPa with injection temperature of 220 °C and FID detector (flame ionization detector) temperature 260 °C. The initial oven temperature was 130 °C, which was increased at a rate of 6.5 °C min−1 to the final steady temperature of 260 °C, which was held for 4 min before the run was terminated.

All experiments were conducted in a completely randomized blocked design replicated three times. Data were analysed using one-way analysis of variance (ANOVA) using SPSS 22.0 (SPSS for windows Inc., Chicago, IL, USA) to evaluate the measured parameters affected by the different fields. Multiple comparison was performed using Tukey’s test at p < 0.05. Data are presented as mean ± standard error. When considering the differences between the cropping years, a two-way analysis of variance was used with the different years and fields as two fixed factors. Linear regression analysis was utilized to investigate the relationship between selected fatty acids such as oleic, linolenic, and lauric acid and 1000-seed weight with selected soil nutrients. In addition, principal component analysis (PCA) was performed to clarify the overall variability with respect to correlations among seed yield, 1000-seed weight, fatty acid contents, and soil chemical properties in the different fields that were treated as categorical data for both 2015 and 2016 cropping.

3.2. Seed Fatty Acid Composition on the Different Continuously Monocropped Fields in 2015 and 2016

3.3. Soil Chemical Properties on the Different Continuously Monocropped Fields in 2015 and 2016

The correlation analyses conducted between selected parameters are shown in Figure 5. The correlation analyses indicated a significant positive linear regression (r = 0.458, p < 0.05) between the soil exchangeable K and 1000-seed weight (Figure 5a). In addition, there was a significant positive correlation between the lauric acid content and soil exchangeable K with a linear regression (r = 0.540, p < 0.01), as shown in Figure 5b. Furthermore, a significant positive correlation (r = 0.456, p < 0.05) between the oleic content and soil exchangeable Mg in the average data of two years among the different continuously monocropped fields was observed (Figure 5c). On the other hand, a negative correlation (r = −0.404, p = 0.05), as shown in Figure 5d between linolenic acid and 1000-seed weight, was observed.
In addition to the correlation analysis, principal component analysis (PCA) was performed to visualize the relationship between variables and continuous monocropping fields. A summary of the total variation of seed yield, 1000-seed weight, fatty acid composition, and soil chemical properties analysed is presented by the first two factors of the PCA data, which explains 53.9% of the total variance (Figure 6a). The first principal component (PC 1) is attributed to 43.1% of the total variance and shows a high positive correlation mainly with oleic, linoleic, PUFA, linolenic, and soil exchangeable Mg content and a high negative correlation with lauric acid, myristic acid, and soil exchangeable K contents. The second factor (PC 2) obtained by the PCA analysis accounts for 10.8% of the total variance among the continuous monocropping fields and is positively correlated with TFA, SFA, and yield whereas is negatively correlated with the C/N ratio and palmitic acid content. The score plot of the PCA (Figure 6b) shows a relatively good separation of two clusters: group (I) from fields A and B and group (II) from fields C and D. Group (I) showed high values for contents of lauric acid, myristic acid, soil exchangeable K, and 1000-seed weight (TSW), whereas group (II) showed high values for contents of oleic acid, linoleic acid, linolenic acid, MUFA, PUFA, and soil exchangeable Mg in both years 2015 and 2016.

We are grateful for the support from the Ministry of Education, Culture, Sports, Science, and Technology (MEXT) of Japan under the Japanese Government MEXT scholarship of the first author. 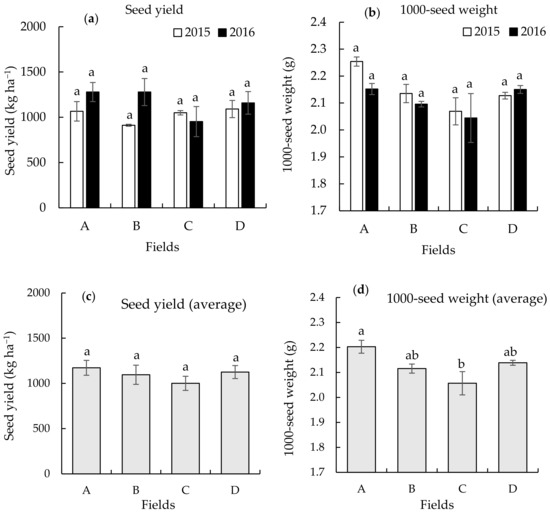 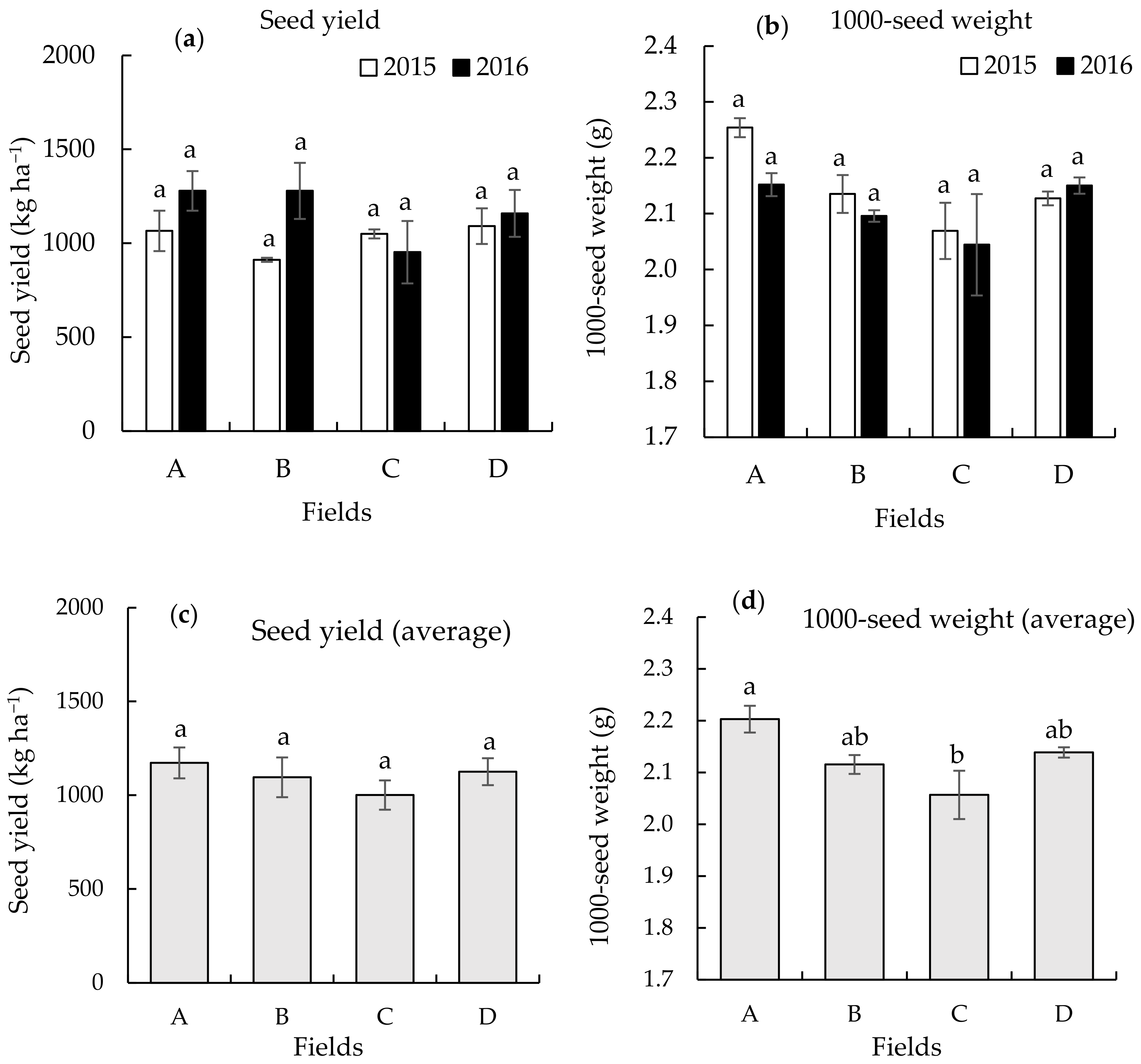 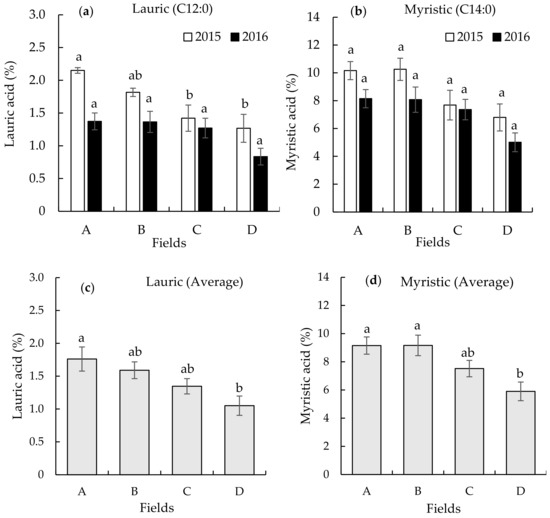 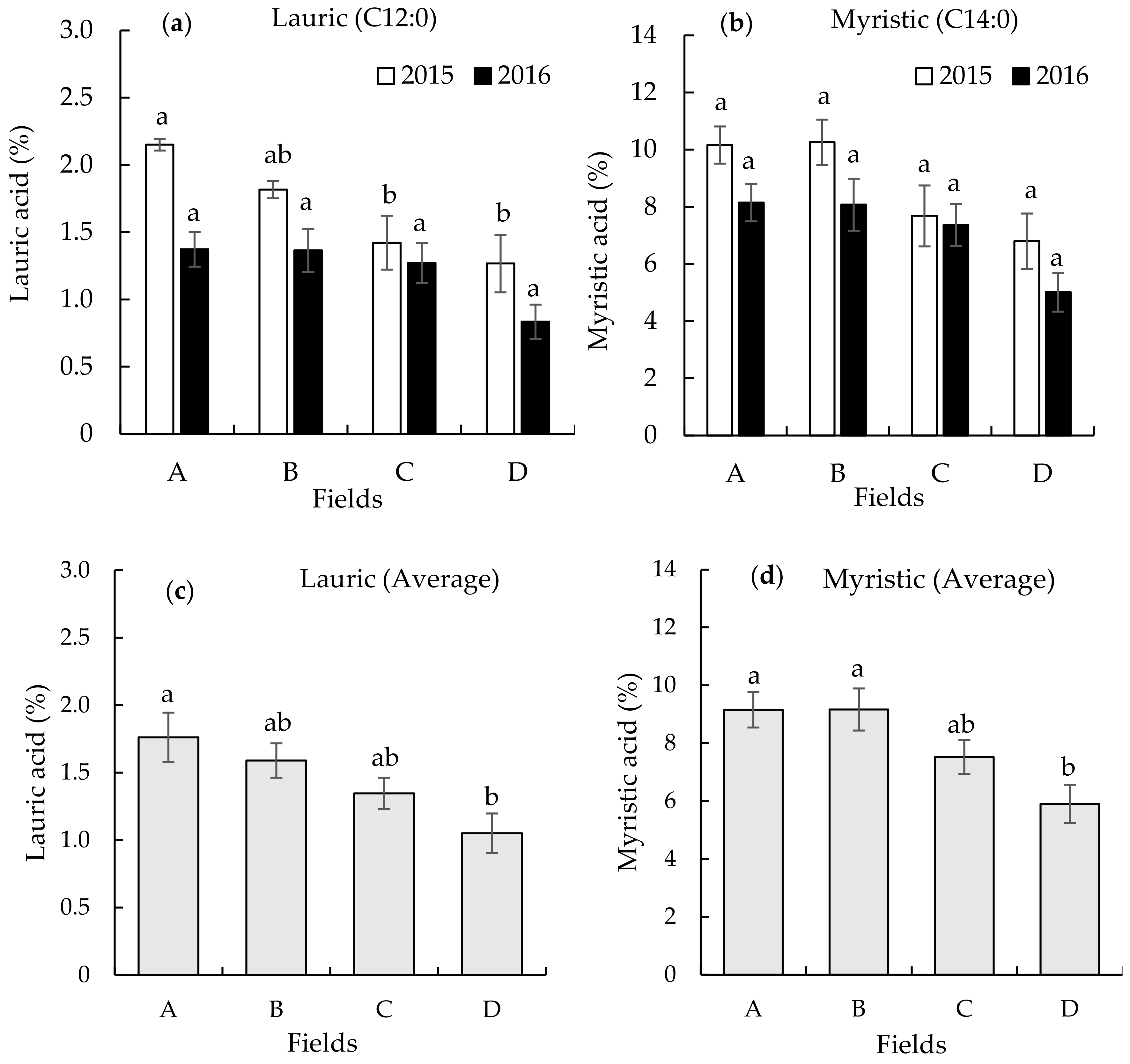 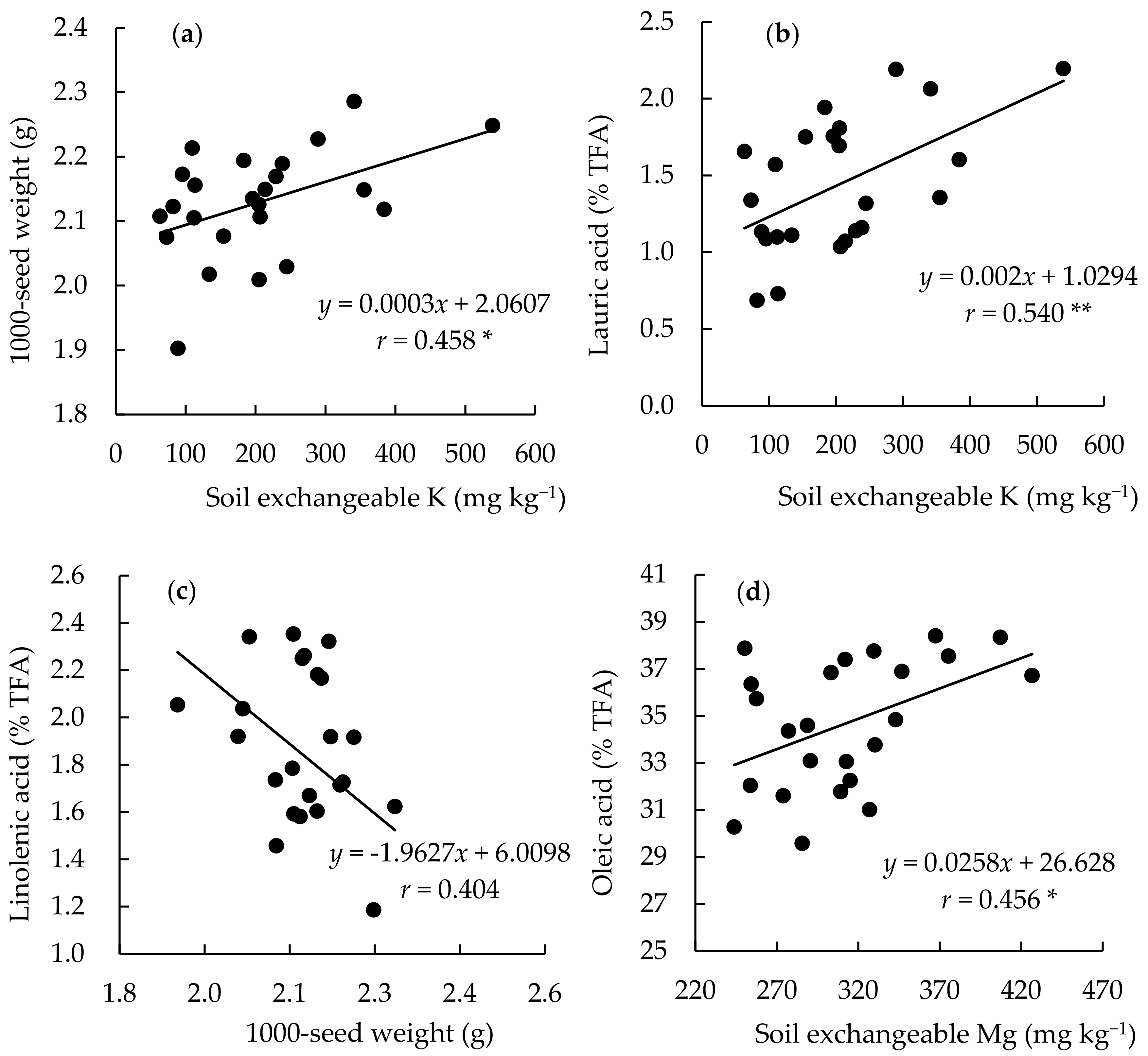